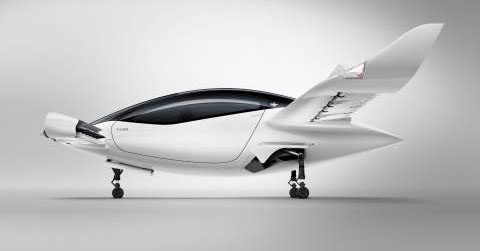 Most of DiscoverEV’s reviews and news are about electric, plug-in and plug-in hybrid vehicles, but occasionally there’s something that breaks away from the norm and gets us very excited – even if it doesn’t have four wheels. And that is the Lilium Jet – a completely new all-electric, five-seater air taxi prototype that completed its first successful test flight on 4 May.

Like a helicopter, it can land and take off vertically thanks to 36 all-electric jet engines, yet it has no tail, rudder, propellers, or gearbox — its engine is the only moving part – so in that sense it looks like the mother of all drones. It has a top speed of 186mph, according to Lilium, and a range of 186 miles – that’s the distance from London to Liverpool, a journey it can make in less than one hour. To put that into perspective, that journey in a car (about 220 miles) would take just over four hours assuming there’s no traffic congestion, accidents, road closures and so on; on a train it’d take two hours and 12 minutes, again assuming there are no delays, cancellations or diversions.

It all makes so much sense; you wonder why an air taxi service is only just happing now. These things take time, of course. The German company first completed a test flight of a two-seater prototype in 2017 and has since raised £78 million in funding to expand and get its five-seater version, quite literally, off the ground. The Lilium Jet will operate as part of an on-demand air taxi service, where customers will use an app to locate their nearest landing pad and plan their journey. Lilium claims that journeys will be a similar price to that of a taxi, only four times faster.

“Today we are taking another huge step towards making urban air mobility a reality,” says Lilium co-founder and CEO Daniel Wiegand. “In less than two years we have been able to design, build and successfully fly an aircraft that will serve as our template for mass production. Moving from two to five seats was always our ambition as it enables us to open up the skies to many more travelers.”

But what about noise? And safety? Each of the 36 engines has a ducted design, which captures and dissipates the noise before it leaves the engines. Vibration is low too, so the ride is as smooth and as comfortable as possible. Lilium works on the basic principle that the fewer components there are, the less there is to go wrong and the safer their Jet is. And stripping back all unnecessary components makes for a more affordable product.

Of course, there are extremely strict safety regulations that any aircraft must adhere to, which is why the Lilium Jet is being certified to standards set by independent government bodies, such as the European Aviation Safety Agency and the Federal Aviation Authority in the United States.

According to Lilium, it expects the Jet to be fully operational “in various cities around the world by 2025”, with trial services starting even earlier. Truly exciting stuff.