Beyond cars: EV technology in other sectors

Whilst electric cars grab the headlines and are the biggest talking point in the future of mobility, they make up only part of the wider transportation puzzle.

Since the advent of internal combustion, large machines that may have once been driven by coal and steam have gone down the route of being powered by liquid fossil fuels. Now, the EV revolution stretches across transportation sectors and is growing exponentially in importance among them.

Reducing emissions is a key driver in this; heavy industrial road vehicles produce almost six per cent of total emissions and a third of vehicular emissions across the EU alone. Factor in things like rail and – one of the world's big emissions culprits – shipping, and the scope for cleaning up the air through electric technology is huge. And it's not just a nice thing for industry to do, as governments are now demanding it.

As well as reducing emissions and hitting local, national and international standards, electric drive is both energy efficient and can produce mountainous torque figures – a key factor in moving heavy loads. Diesel engines, the closest equivalent in terms of power delivery, only convert around 30-35 per cent of the energy in the fuel to useful power for example, whereas electric motors achieve closer to 90 per cent efficiency. From this perspective it's clear why electricity is so attractive.

However there is always the issue of the environmental impact in the actual production of an electric vehicle and battery production has been under particular scrutiny. Mining and refining the materials such as nickel, graphite, copper and aluminium is energy intensive and the result is that EVs start their lives with a carbon 'debt' before they've even turned a wheel.

But mining is getting greener, and one such vehicle helping to achieve this is possibly the world's largest land-based EV – the 110 tonne Elektro Dumper. And it never needs to be recharged.

Based on Komatsu HB 605-7 (no, we'd never heard of one either), the Elektro Dumper – or eDumper for short – stands at 14 feet wide and 14 feet tall. Unladen, it weighs 45 tonnes of which five are made up of an enormous 700kWh battery pack which is about seven times the size of the largest currently seen in high-end electric cars. This powers a 788bhp, 7007lb-ft electric motor.

The eDumper is currently operating in a quarry in Switzerland, hauling a payload of 65 tonnes of lime and marl down from the mining face to a processing plant. And it is this setup of climbing up to the quarry unladen and down from the quarry at its maximum weight that allows the eDumper to generate more energy than it uses through regenerative braking.

Recently, CNN sent Formula E driver Lucad DiGrassi along to test the eDumper and, after starting at the processing plant with 80 per cent charge, a round trip – returning with a full payload – generated enough to return with 88 per cent. Per day, the eDumper can generate up to 200kWh of surplus charge and over a year will save between 11,000 and 22,000 gallons of diesel when compared to a normal diesel-electric dumper. This in turn will stop 130-odd tons of CO2 being released into the atmosphere.

Whilst the eDumper might be the largest EV on land, the potential for even bigger EVs comes from the sea. 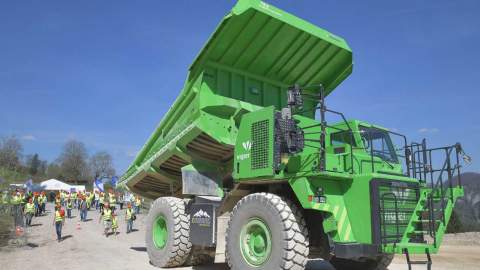 At 60 metres long and 13 metres wide, the electric ferry Ellen takes the crown as the world's largest electric vehicle. It has a payload of 198 passengers, with capacity for 31 cars or five trucks on its open deck. Its regular route is 22 nautical miles between the Danish islands of Ærø and Fynshav which it covers at speeds of up to 15.5 knots – or nearly 18mph.

Ellen is unique in that she doesn't have any on-board back-up diesel engines and is thus the first 'proper' fully electric ferry to go into passenger service. She's powered by a drivetrain and energy management system devised by Danish company, Danfoss Editron. This comprises two 1006bhp drive units and two 335bhp thrusters.

The star of the show is a simply enormous 4.3MW battery pack, which is charged via an on-shore charging station. Said to be the biggest battery in marine use, and therefore almost certainly the largest battery powering a moving vehicle, it is a marvel of engineering. Sadly, we don't know what the charging input is, but it's fair to assume a standard three-pin wouldn't cut the mustard.

Shipping is hugely polluting; it was recently revealed that Carnival Cruise's fleet alone is more polluting than all of the cars in Europe combined. Ellen is a small but significant step in addressing this. She saves a gargantuan 2000 tonnes of CO2, 42 tonnes of Nitrogen Oxides, 2.5 tonnes of particulates and 1.4 tonnes of sulphur dioxide per year.

Given that air quality around ports is typically fairly dreadful, aside from the wider environmental impact Ellen is making the lives of those who live nearby both cleaner and quieter. Air quality in cities like London can is also be fairly dire, so governments and city authorities are looking to electric vehicles to clean it up. 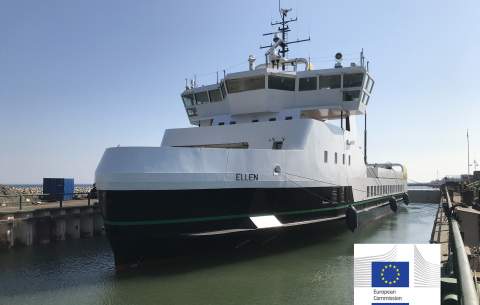 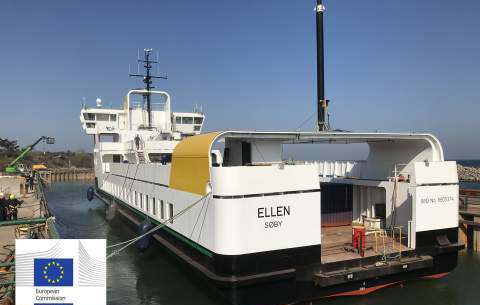 Cleaning the air in cities

In London, two million people live in areas that suffer from air pollution that is illegal when set against international standards. Some 400,000 children live within these zones; 369 primary and 86 secondary schools are sited here. Across the UK, 40,000 deaths can be directly attributed to polluted air per year.

London has been improving, especially in terms of cleaning up nitrogen dioxide – a harmful gas that is emitted mostly by diesel vehicles. Initiatives like the Ultra Low Emissions Zone (ULEZ), which is the first in Europe to operate 24 hours per day, have encouraged firms and individuals to move over to electric cars or trucks and also to use public transport – public transport that is also going green.

Buses (and other commercial vehicles) are well suited to electric motivation thanks to the torque on offer, but fall down as their energy use is so much higher than that of smaller vehicles. However, as pure electric power is winning out for cars, hydrogen fuel cells have found a niche in powering commercial vehicles such as buses.

Fuel cell electric buses are nothing new in London, having been introduced while Boris Johnson was Mayor. These were only single deckers, and therefore limited in the routes that they could operate on. To up its game, Transport for London (TfL) is now investing £12m in 20 fuel cell double decker buses to further improve air quality in the capital. In fact, London will be the first city in the world to operate such stock.

The Wrightbus Streetdeck can carry 64 passengers and has a standard range of 200 miles (or 264 in range extended form) which is plenty given that most London buses won't cover this on a typical day. Refuelling takes seven minutes and can be done at the depot.

As part of Mayor Sadiq Khan's Transport Strategy, TfL is clamping down on its own fleet by introducing ULEZ bus zones on some of the capitals busiest roads. As a result, in these zones harmful NOx emissions are down by 90 per cent.

Getting in and out of cities is something that many people do by train, and a quarter of the UK's rolling stock is powered by diesel. Could hydrogen be an alternative on the rails, too? 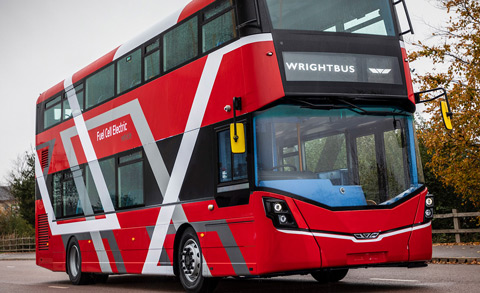 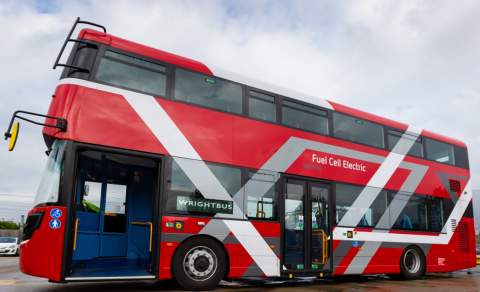 The UK government wants diesel-powered trains gone by 2040, but the challenge facing the railways is that electrification isn't practical in some areas. This is where hydrogen fuel cell technology can step in.

At present, Germany is the only country in the world that has hydrogen fuel cell trains running on a regular service, but Britain is hoping to follow suit by 2022. Unfortunately, due to the standard size of rolling stock that has been around since the Victorians we can't just purchase the trains made by Alstom that are in use over there – they're too tall for our network.

However, work is being undertaken to convert existing British Rail Type 321 rolling stock into hydrogen fuel cell-powered units with the help of Alstom. Known as electric multiple units, different carriages will perform a particular function in generating electricity such as hydrogen storage, fuel cell location and a cab unit. These trains are known as 'Breeze' and are planned to be ready for that 2022 launch.

Hydrogen-powered trains will be most prevalent in the north of the UK where widespread electrification isn't practical. Trials are already taking place with 'Hydroflex' trains (created by manufacturer Peterbrook with help from the University of Birmingham) which have been demonstrated publicly, albeit in a very limited capacity, earlier this year.

Public transport isn't the only thing that's getting cleaner in cities. As cars are penalised, people are looking to new means of personal transport to get around.

The guidance is extensive and somewhat mind boggling, but as the appetite for personal urban mobility grows, we reckon it'll be updated. Aside for public desire, there is the necessity to reduce urban emissions, reduce car traffic and to fall in-line with other countries. Numerous manufacturers are also pursuing these solutions so there will be lobbying, not to mention the potential revenue for the public purse through VAT, licencing and other tariffs.

Heavily populated, tech-driven countries such as Japan and China are pushing the agenda in this area. Most recently, Chinese Segway-Ninebot has come out with an electric scooter, designed for urban hire, which will drive itself to a charging station after use rather than needing to be gathered up and manually plugged in. Called the KickScooter T60, it has two wheels at the front and one at the back for stability, and will use AI to find its way back to a charging dock without human interference – allegedly. At the time of writing Segway-Ninebot is yet to demonstrate this ability...

Vehicle manufacturers have been quick to jump on the personal electric mobility trend, too. Audi has created the e-tron Scooter which is a foldable, 12kg part skateboard, part scooter, which can be taken on trains and buses, and will allow users to travel 12.5 miles at up to 12.5 miles per hour. Audi is so serious that the 2000 Euro e-tron Scooter will go on sale next year.

In a similar vein to the e-tron Scooter, VW demonstrated its Cityskater at the Geneva Motor Show earlier this year. Also designed as a 'final mile' commuter aid, it has a range of nine miles, can do 12mph and folded up for storage. A step up from the Cityskater is the Streetmate – a medium range electric scooter and an alternative to something like a 50cc moped. With a top speed of 28mph and range of 21 miles, it's designed for longer, cross-city urban journeys.

The revolution will be electrified

We've only scraped the surface of the revolution in mobility that is occurring across sectors and functions, but one thing is clear, and that is that it is going to be electrically driven. It might even be electrically flown, as on September 14th an electric taxi called the Volocopter made its maiden flight at the Mercedes HQ in Stuttgart. Based on drone technology, it is designed to transport people quickly and cleanly around urban environments, though as with other electric aircraft, range is the main limiting factor; the Volocopter can manage 16 miles on a charge. But it's a start.

Of course, there are numerous challenges with regards pressure on electricity grids, regulation and reducing the environmental impact of production. But these are challenges that will need to be overcome as internal combustion is phased out for greener alternatives.