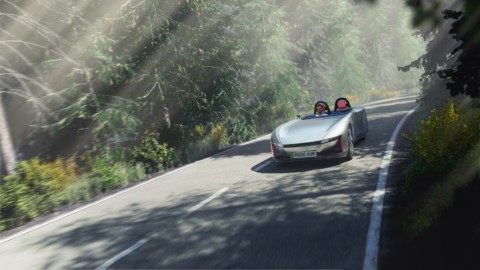 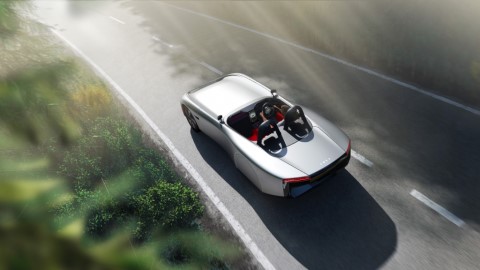 Plenty of petrolheads are still unconvinced that EVs will ever replace petrol cars for ultimate driving pleasure. The Aura concept electric sportscar however has been designed to challenge this train of thought, offering open-top motoring speed and fun and good looks.

The project has been undertaken by four different British suppliers, each of which specialises in a complementary area of car design and development, to create a complete package in the shape of the Aura. Astheimer Design undertook the car’s form and visual appeal; BAMD composites produced the materials to build it; Potenza technology developed the rolling stock; and finally, Conjure fashioned the car’s human/machine interface.

What’s been produced is an all-electric, roofless sportscar that looks like the love child of the VW XL1 and Renault Spider. And honestly, that’s really not a bad thing at all. Perhaps the best thing about it is that the Aura is fully working and road legal.

In terms of design, the rear (driving) wheels shod in low rolling resistance tyres from Potenza improve aerodynamics to extend that all-important range. Astheimer Design’s body shape was designed using computational fluid dynamic testing to ensure that – aside from those enclosed rear wheels – the rest of the car is as slippery as possible.

Materials, developed by BAMD Composites, include the company’s sustainable BCOMP natural woven fabric which is used to construct ultra-lightweight body panels. Vegan leather from the company also adds to the car’s green credentials.

All of these small aspects of the Aura have combined to create a car capable of around 400 miles to a charge off of the 88kWh available via two 44kWh Potenza battery packs, managed by the firm’s power management systems.

Splitting the battery packs into two has a secondary benefit for the designers, enabling them to place the energy storage where it offers the best compromise for weight distribution and handling. In the Aura’s case, this means one pack up front and the other as an undertray pack mounted very low onto the chassis.

The final element of the Aura is in the way the team wants would-be drivers to interact with the car, and the roads upon which they are driving using a ‘cutting-edge human/machine interface (HMI)’. This has been created by Conjure and incorporates a five inch, self-levelling circular display within the steering wheel displaying things like range, speed, weather and nav. Think of a road-going version of an F1 steering wheel.

Complementing this is a ten inch central display which works with the steering wheel display in harmony, run by a single computing unit. Live 3D performance and aerodynamic views enable drivers to assess their driving style and adjust it to maximise range – or not if they’re pressing on!

The whole Aura project was funded using money from the Office for Zero Emission Vehicles and Niche Vehicle Network and only started 11 months ago. More than anything else, the Aura is perhaps an example of how important networks of smaller suppliers are when it comes to building a single, harmonious project.