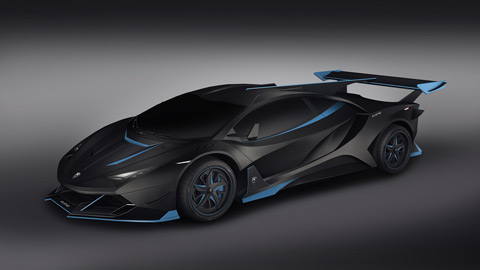 Electric hypercars are the dish of the day, with Lotus entering the race alongside the likes of Rimac and Pininfarina. More brands are undoubtedly going to follow suit in the near future, but hold your horses, because there's a new challenger on the block: Meet the Alieno Arcanum.

This car hails from that hotbed of EV hypercar development, Bulgaria, and – if the somewhat confusing
PR blurb is to be believed – will come with a maximum of 5150bhp and a top speed of 303mph! So put aside the fact that it looks like a Photoshopped Lamborghini, and perhaps put down your coffee or at least move it away from your phone/laptop/keyboard because we're going to hit you with some pretty unbelievable stats...

Well, this bit is sketchy. There's little out there to confirm that Alieno as a brand is much more than a fanciful ideal, but assuming it has some weight behind it, the Bulgarian brand was founded in 2015 with the Arcanum seeing the light of day late last year. Perhaps obviously, 'Alieno' is a play on the word 'alien' and Arcanum is derived from the Latin meaning 'secret of secrets' – which is apt given how little we know.

The brand pitches itself as creating 'hypercars from the future', though from what we've read a flux capacitor isn't on the options list.

Alieno achieves this not by deploying large, extremely powerful motors, but banks of smaller ones connected via a 'common connecting axis' and enabling transfer of power to any combination of the four wheels via torque vectoring. On the RP5, for example, some 24 of these motors are used to reach that final power figure.

Pick your preferred use

Each version of the Alieno Arcanum is available in three different variants which use text-speak to hint at their preferred use. These are STR (street), TRC (track) and RCE (race). Alieno boldly claims that it can even prepare the car to meet LMP1 regulations... once they've been put in place for all-electric cars to join in. However given its limitation of six all-out laps of Circuit de la Sarthe (more on that below), this may be a premature requirement.

As with the rest of the car, Alieno has provided many numbers and many more words, but little in the way of substantive information. However, the bottom line is that the battery has apparently been developed in-house using 'nanotechnologies' and is available in three guises which employ a heavy use of acronyms. There's the 180kWh SBP (street battery pack), a 120kWh TBP (track battery pack) and a 60kWh RBP (race battery pack).

With a full charge, the car can do between one and three laps of the Nürburgring and between two and six laps of Circuit de la Sarthe... allegedly. More encouragingly, from a full SBP charge, the Arcanum is said to be able to do around 600 of your most optimistic miles.

Charging is handled by either wireless induction, a three-phase 22kW on-board or 350kW CCS. Alieno will supply a 400kW CHAdeMO charging – if you can find a 400kW supply. Zero-to-full for the SPB using a 350kW charger takes 30 minutes.

Firstly, put the fact it looks exactly like a Lambo behind you, or at least try to. Apparently the Alieno Arcanum is made of 'robotic' carbon fibre panels. It has butterfly doors and its form is inspired by, among other things; sharks, stealth fighter planes, and Darth Vader's helmet. According to the official press release, to see Darth Vader's helmet all you need to do is “look at the rear of the car and use your imagination”. It's not clear if squinting is also necessary.

Both inside and out Alieno is promoting a high level of customisation depending on what the customer wants – and how deep their pockets are. A host of driving aids and active aerodynamics are said to make it a bit of a weapon on the road or on track, but we'll take Alieno's word for it on this one.

In terms of cost, you're looking at a minimum of £670k through to £1.35 million depending on spec and options. Furthermore, you're looking at a waiting time of 18 to 30 months which might explain why we're yet to see one in the flesh. Or it could be that actually, none exist... But either way, as a debut into the world of electric hypercars, Bulgaria's pre-eminent manufacturer has certainly decided to go big.