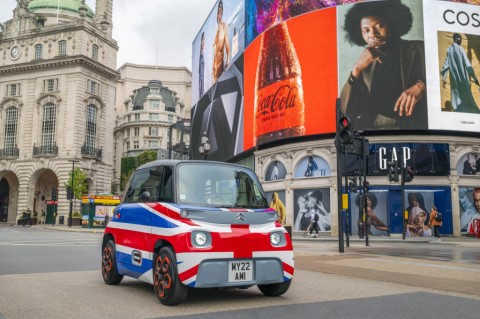 Due to unprecedented demand, Citroën AMI will launch in the UK during spring 2022

After a period of assessing whether there’s enough demand in the UK to bring its city car to the country, Citroën has decided to sell the AMI here from next year.

Since its inception, the Citroën AMI has garnered a huge amount of press thanks in no small part to its funky design, zero emissions credentials, and the simple fact that it represents a brilliant way of getting around a town or city. Despite the fact that until now we didn’t know for sure whether the French carmaker was going to bring it to the UK, the AMI has won a brace of awards from the likes of GQ and Auto Express.

We liked it too back when we had a go in a pre-production, left-hand drive version, reckoning on it being part of the future of urban mobility and being somewhat of a latter day 2CV: Cheap, simple transport for the masses with almost everything you need to get around.

Now, the furore has come to a positive conclusion. As of spring 2022, you’ll be able to buy a Citroën AMI here in Blighty.

This is great news, and it has been driven in-part by demand which was ascertained through Citroën allowing would-be buyers to register their interest. More than 12,000 of them did, and now they will be the first to be given the chance to put down a £250 (refundable) reservation fee – enabling them to be among the first to get hold of the AMI when it arrives. As such, if you want to add your name to the list, you’ll have to wait in line!

UK-specific adaptations will be made, though we’re not quite sure what these will be. For example, the car will still be left-hand drive – not that you should worry as at just 1.39m wide and with fantastic all-round visibility, it shouldn’t make much difference in real-world conditions. Citroën points out that it’ll make kerbside parking even easier.

If you’re 16 and have heard how it’s possible to drive a Citroën AMI in France on a moped licence, there’s bad news. Over here, you’ll need a regular driving licence. We reckon the AMI will prove popular with younger buyers, though, thanks to its low cost and the huge range of personalisation options so owners can make their car unique to them.

As we’ve mentioned, though, the AMI won’t be a car for long road trips or flying the nest to university. It’s suited to small, urban roads, city and town driving, and not much else. The 5.5kWh battery gives it a range of up to 46 miles and it maxes out at 28mph, so it’s worth bearing in mind the AMI’s raison d’etre before getting caught up in its cuteness.

Eurig Druce, Managing Director of Citroën UK, said: “I am absolutely delighted to announce that Citroën AMI is launching in the UK. With cities and urban areas introducing stricter limits for vehicles, and people demanding new mobility solutions, AMI shows once again how Citroën is adapting to meet the demands of the times. Citroën AMI is a new all-electric mobility solution for the UK that’s totally unique – fun, exciting and accessible to all.

As for us, we can’t wait to see them on the road. We’ll bring you pricing and specs as soon as we have them.