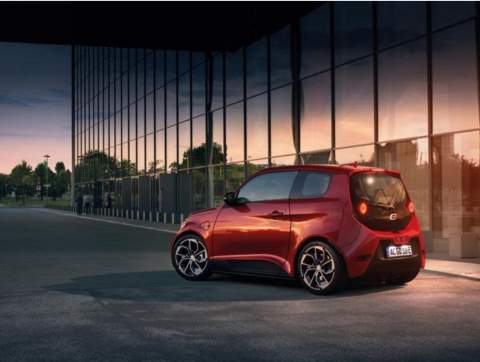 No, it’s not a mobile phone company that has decided to go way off-piste and enter the EV market, but rather an electric car start-up that has delivered good on its promise made back in 2014 to create an electric city car for series production. And the first edition e.GO Life cars were handed over to dignitaries including North-Rhine Westphalia’s head of state Armin Laschet, Aachen Mayor Marcel Philipp and Professor Dr Ulrich Rüdiger of RWTH Aachen University in Aachen, Germany, on 9 May.

But it’s not been an easy ride for e.GO to get to this point. The company became the first to use Volkswagen’s incoming modular electric (MEB) and were forced to announce only a few days ago that the first freely configurable e.GO Life electric cars will not be delivered before autumn. It will, however, supply all reservation holders (around 3300 to date) by the beginning of next year.

The reason for this delay, says e.GO, is down to the car’s electronic stability program (ESP): “Since our suppliers will not approve the ESP for road use until autumn 2019 and we did not want to keep our pre-orders waiting any longer, we first had to be content with a small series approval for which no ESP is required.” This means that the first production run is about 1000, which will initially have 53kW and no recuperation mode.

Teething problems aside, the important question is: how does the car’s spec stack up? The first thing to know is that e.GO is offering three models – Life 20, Life 40 and Life 60. All have Bosch-supplied lithium-ion batteries, four seats and weigh 1600kg, but that’s where the similarities end. The Life 20 has a 14.5kW battery that charges to full in just less than four hours with a Type 2 connector. Its range is 62 miles, with a top speed of 69mph and a 0-30mph time of 7.7 seconds.