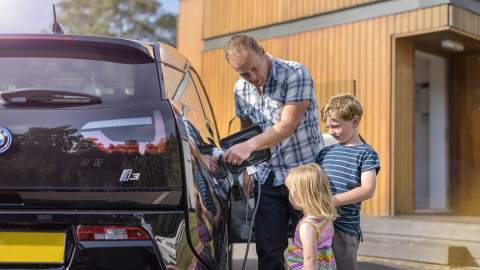 Get home, feed the kids/cat/dog, eat dinner, watch TV, plug in your smartphone, go to sleep – and repeat. It's a routine that millions of us can identify with after a day at work, only for some people there's one more step to undertake and that's to plug in the car ready for the next day.

In a study undertaken by Western Power Distribution (WPD), called Electric Nation, almost 700 EV and PHEV owners' habits were studied over a period of 18 months. This not only looked at their physical charging habits, it also studied how much charge their car typically required and the time period that their car actually drew power from the grid.

The data, taken from over one million charging records, shows that the peak time to plug in an EV is between 5.00pm and 7.00pm – in line with a typical return from work. This goes to show that for most EV owners, getting home and plugging in the car is just part of their daily routine. Typically, owners then left their cars plugged in for around 12 hours.

While tens of thousands of people getting home and plugging in their cars at peak times could be disastrous for the grid – especially in Britain where getting home typically also involves putting the kettle on – the fact is that most cars were only drawing power for a short period during those 12 hours. According to the Electric Nation study the average charge time was just 90 minutes.

To understand how EV owners interacted with smart charging, Electric Nation simulated scenarios and monitored their behaviour and habits. First, however, a baseline was established which showed that on average, pure EV owners charged two-to-three times per week at 7kW where typically their car still had between 70 and 55 per cent charge remaining. PHEV owners charged more frequently from a start-point of less remaining charge, but also charged at 3.6kW. Only 14 per cent of owners charge at home on a daily basis.

The first scenario introduced to gauge the effect of smart charging was a phased introduction – at first unseen with Western Power controlling when cars were being charged whilst plugged in. An app was then introduced that allowed driver interaction. Monitoring of these scenarios showed that people’s habits continued as they were – get home, plug the car in and carry on with the daily routine.

The final test was to introduce simulated time of use tariffs, where owners could reduce costs by setting their smart charger to only draw power when electricity rates were lower – i.e. away from peak periods. Electric Nation found that this scenario, supported with an app to monitor and control charging, was the most effective from three standpoints: saving the consumer money, reducing strain on the grid and fitting in with owner habits.

This last point is particularly important as it means EV owners can continue their habitual behaviour of plugging the car in when they get home safe in the knowledge that it'll be charged when energy is cheapest and still be ready for the next day.

WPD DSO Systems and Projects Manager, Roger Hey, said: “This (study) shows that most people treat home EV charging as part of their daily routine. If all EVs had to charge at this point it would mean network companies would have to build much larger networks to accommodate the demand.

“But the fact that charging only takes place for some of the time means it’s possible to move charging activity away from peak hours which means our existing network can cope with the extra load the move to EVs will create.”

Electric Nation isn't resting on its laurels; it is currently working with DriveElectric on a mini feasibility and owner experience trial for V2G-capable chargers.