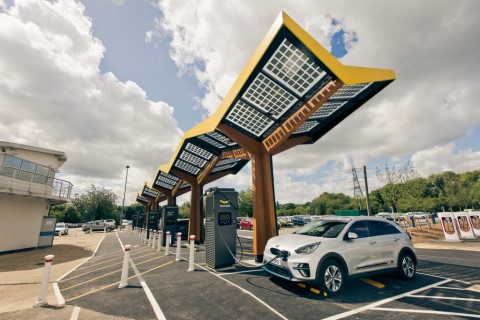 The scale of Energy Superhub Oxford is what makes it such an exciting project in the transition to electric transportation. It also has the potential to become a blueprint for how other strategic hubs around the UK might take shape in the future – combining expertise from multiple companies and also the local grid.

Located at the City’s Redbridge Park and Ride, the hub is powered entirely by renewable energy and posts some really big numbers in terms of capacity.

Initially, it will be able to charge 42 vehicles at ultra-fast speeds simultaneously. Ten of these chargers can run at up to 300kW, fully charging even relatively large capacity EV batteries in less than 20 minutes. These have been installed by Fastned and thanks to the high speeds, could see a throughput of hundreds of EVs per day.

Wenea has worked in collaboration with the local City Council to instal 20 chargers which are for longer dwelling or top-ups, running at between 7 and 22kW. Finally, 12 Tesla superchargers have been installed, charging at the firm’s usual maximum of 250kW. Presently, these will be reserved for Tesla owners though there is the potential for them to join the programme of opening up to owners of other EVs.

Another big number which can’t be ignored is the ability of the infrastructure to be scaled up to charge 400 vehicles simultaneously. This is facilitated thanks to a gargantuan 10MW of storage installed on-site thanks to Pivot Power which stores renewable energy to be used during charging. It also helps the local grid by discharging at times of low wind or sunshine and recharging when renewable energy is abundant.

This is the world’s largest hybrid energy battery storage system and demonstrates how the grid can be balanced in future when the 30 million-plus cars on the UK’s roads are predominantly electric.

As well as the on-site power, unlike any other charging hub in the UK, Energy Superhub Oxford is connected to National Grid’s high voltage transmission network, enabling 10MW of power to be delivered quickly and again, without additional strain on the local electricity network.

An added bonus that the superhub has provided is £900,000 in funding for Oxford City Council to electrify some of its fleet. Some 40 vehicles have been bought including cars, vans, road sweepers and even the city’s first electric bin lorry. All of this is helping the city to decarbonise, saving 25,000 tonnes of CO2 by 2032 and completely decarbonising by 2040.

Councillor Imogen Thomas, Cabinet Member for Zero Carbon Oxford and Climate Justice, Oxford City Council, said: “Oxford has a history of being ambitious as we look to adopt new and exciting transport approaches in our city. Redbridge was the location of the country’s first full running Park & Ride in 1973, and now almost 50 years later, we are home to Europe’s most powerful electric vehicle charging hub. In order to achieve a Zero Carbon Oxford by 2040 we need to encourage uptake in electric vehicles, and drivers want to know that they can charge their vehicles quickly and efficiently. The completion of Energy Superhub Oxford is an exciting step for our city and the future of EV charging.”