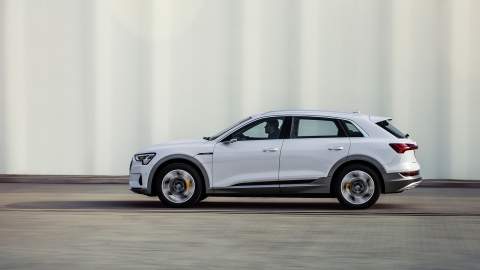 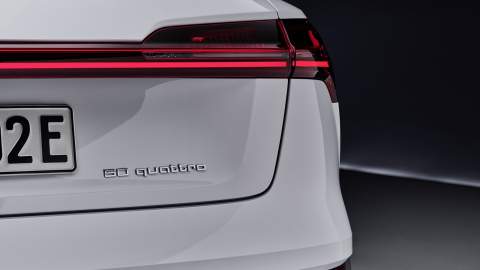 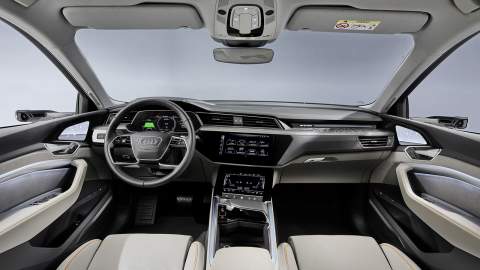 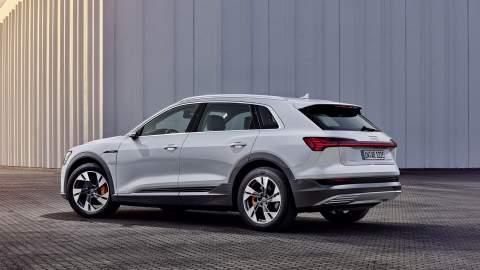 New version of e-tron brings down the price of Audi EV ownership with 50 quattro models starting from £59,900

Buying your way into EV ownership via an Audi dealership is not a cheap way of going about things. Its flagship EV, the e-tron 55, starts at over £70k before government grants – which is a lot of money. Now, Audi is hoping to reach a (slightly) wider audience with an 'entry-level' version of its EV SUV; the Audi e-tron 50 quattro.

Like its full-fat brethren, the e-tron 50 comes with many bells and many whistles packaged into a car that comes complete with the build quality and functionality that we expect from an Audi. Our e-tron 55 video goes over some of these features. Where it differs, and where it makes those all-important cost savings, is in the battery, charging and drivetrain departments.

The e-tron 50 gets a 71kWh battery comprising 324 prismatic cells in 27 modules, down from the 95kWh in 36 modules that its big brother gets. On the WLTP cycle the e-tron 50 quattro has a range of 190 miles, delivered through a newly calibrated drivetrain and – we assume – software. This is 55 fewer miles that the e-tron 55. On the plus side, the car weighs around 120kg less.

As well as a smaller capacity, the 50 accepts a slightly lesser charge input compared to the 55. It rapid charges at 120kW (vs 150kW for the 55) which will deliver 0-80 per cent in around 30 minutes. In terms of home charging, the e-tron 50 is supplied with a compact charging system that supports 2.3kW charging using a standard 230 volt domestic supply. Using a 400 volt industrial supply offers up a stouter 11kW.

All buyers of the e-tron 50, e-tron and e-tron Sportback (at the time of writing in February 2020) can get a 7kW wall box charger at no extra cost. In e-tron 50 guise, this will charge a completely depleted battery to full in around 10.5 hours. Another bonus for e-tron buyers is free subscription to Audi e-tron Charging Services via the Audi EV hub.

Audi has retained the e-tron 55's dual-motor setup for the 50, with the rear motor doing most of the work until the front wheels – and thus the Quattro system – is required. Power sits at a considerable 308bhp (down from 402bhp for the e-tron 55) with 398lb-ft of torque (down from 490lb-ft in the 55). This gives the e-tron 50 quattro a 0-62mph time of seven seconds dead. Top speed is limited to 118mph.

Energy recuperation is employed through regenerative braking which feeds otherwise wasted energy back to the battery in almost all deceleration actions. Wheel brakes – that is the car's disc brakes – are only used when deceleration exceeds 0.3g which, Audi says, leads to some impressive stopping distances.

To help drivers optimise the range of their e-tron 50, Audi's virtual cockpit takes an array of data from sensors, navigation data and traffic-to-destination information to detect the immediate traffic environment and most efficient route to a programmed end point.

This story was first run in August 2019 but now, in February 2020, Audi has revealed the price – which starts at a fairly whopping £59,900 for the Technik trim level. At the top end, the Launch Edition car will retail at £72,700. Whilst the upper end is an awful lot of money, it's the price point at which you can buy an entry-level e-tron 55, so you'll be getting an awful lot of kit for your money.

We still rate the e-tron 55 as one of the best EVs we've tested, so if the e-tron 50 lives up to its big brother, it represents value.