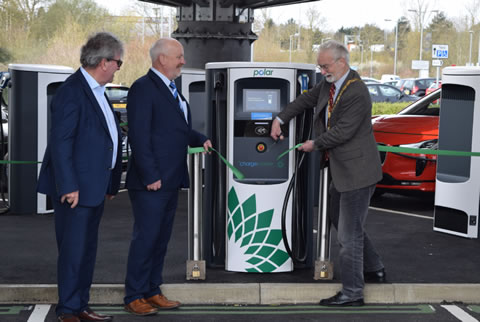 Fastned, a Dutch company, has ambitious plans to build a European network of 1000 fast charging stations and has already got 88 stations up and running. Having expanded from the Netherlands into Germany, Belgium and Switzerland, more recently, Fastned has won a second tender in the UK for five more charging stations, which will be included in the network and led by the North East Joined Transport Committee.

Each of the five new stations in Gateshead, Blyth, Whitley Bay, Washington, and Kingston Park are to initially get two 50 kW fast chargers. Hopefully, it will be expanded at a later stage to 175 kW. Two other Fastned stations are currently under development in Newcastle and Sunderland as part of the Go Ultra Low NE programme.

The project is co-funded by the European Regional Development Fund (ERDF) and the UK Government’s Office for Low Emission Vehicles (OLEV).

Acquired by Shell in 2017, NewMotion is the first in Europe to reach a milestone of 100,000 public charging points as it enters their 10th year in the e-mobility industry.

In addition to charging points at NewMotion Network stations, the company works with over 200 roaming partners to build this extensive network of public charge points, covering 28 countries in Europe.

After acquiring the UK’s largest electric vehicle charging company, Chargemaster, BP announced in January of this year it will spend the following two months installing rapid charging points for electric cars at its UK forecourt.

BP has invested £3.5 in the US firm Freewire Technologies, which will provide motorbike-sized charging units at forecourts to top up cars in 30 minutes. Last week it opened the country’s largest universal rapid charging hub for electric vehicles (within a minute’s drive of the M1, just off junction 14 at Milton Keynes Coachway) together with 16 new charge points available on the Polar Network.

With around 130,000 electric and plug-in hybrid cars in the UK, BP expects that number to rise a hundredfold by 2035. So EV charging will undoubtedly become an important part of their business, as well as many other oil firms and companies that specialise in EV charging solutions.

By expanding the charging infrastructure, it will help to make fully electric vehicles just as practical as cars with internal combustion engines, not just for local commuters, but commercial fleets and long-distance travellers.