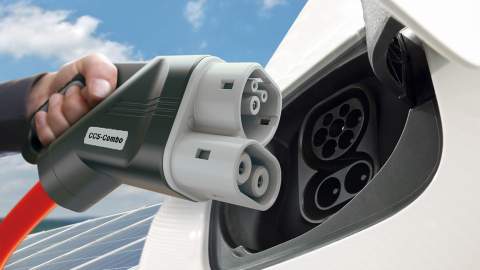 With the recent pledge to reach net zero emissions by 2050, the UK government has announced new funding for research into charging infrastructure. It has pledged £37 million for the development of ideas including wireless charging points and pop-up charging posts – among others – with the ultimate goal being to transform the charging network across the country.

Off the back of the investment the BVRLA (British Vehicle Rental and Leasing Association), whose members are responsible for 35 per cent of the EVs in the UK, has already reaffirmed its Plug-in Pledge for the leasing and rental industry to register 300,000 EVs per year by 2025.

This investment is set against the withdrawal of the government's £2500 PHEV grant which was the driving factor in the 50.4 per cent reduction in PHEV sales in June compared to May this year, resulting in the first fall in alternatively fuelled vehicle sales since 2017. However, it's also set against an interesting piece of research by What Car?, which demonstrates that around 1.5 million UK households could switch to EV travel with no impact on the way they use their cars.

Two of the beneficiaries with innovative solutions to the charging problem are Char.gy and Urban Foresight – the former an existing charging point supplier and the latter a technology-driven consultancy that specialises in the challenges of creating smart cities.

Char.gy has received £2.3m in order to help it develop wireless charging – a scheme it is already piloting in parts of Buckinghamshire, Milton Keynes and London. Wireless charging is hardly a new concept, with induction charging common in a variety of applications, such as mobile phones. However where it is found lacking is in compatibility with most EVs, and that's where the grant comes in.

Installing an induction pad on an EV to allow it to charge wirelessly comes in at around £1000 so the grant can be used to as part of the pilot scheme to increase its scope by converting people's EVs for free. Obviously the underground infrastructure that makes up the other half of the process is a big stumbling block for mass adoption, but if the pilot proves successful the technology could quickly become part of the charging mix.

Urban Foresight's £3 million will go towards the development of pop-up chargers which rise from the pavement for the benefit of the millions of households with no off-street parking. Dr. David Beeton, CEO of Urban Foresight said “Around 50 per cent of cars are parked on-street at night in cities across the UK. Solving the technical and commercial challenges of charging these vehicles will make it easy for drivers to go electric and provide a valuable toolkit for local authorities to reduce pollution from road transport.”

Whilst Urban Foresight was working on its scheme in July 2019, another company, Urban Electric, was busy trialling its pop-up charging solution in Oxford. Delivering power at up to 7kW, the pop-up charge points were designed for overnight charging to prove its concept which in the long term could help solve the issue of charging for the 43 per cent of households that park their cars on the street.

A post-trial survey in April this year, by Oxford City Council, of those who had used the charge points got an overwhelmingly positive response, scoring 4.3 out of 5 when it came to users' propensity to recommend the chargers to a friend or family member. To us, such elegant solutions, alongside things like kerbside and lamp post charging really seem to be the way forward for residents with on-street parking.

Check out the Fully Charged Show's video below to learn more.

1.5m households could switch to EVs with no impact

Urban Foresight's pop-up charging solution and others like it designed to cater for drivers with no off-street parking is extremely important, but a significant number of households could switch to EVs today with no significant impact.

Research by What Car? found that over 1.5 million households would meet the criteria for a 'sweet spot' when it comes to EV adoption – that is to say they have off-street parking for home-charging and at least one vehicle that never does a single journey of more than 100 miles. These households (5.5 per cent of the total number in the UK) could convert to an EV with zero compromise today.

On-street infrastructure is improving at a rapid rate and very few EVs have a range of less than 100 miles. The reality is that the actual number of households that could convert to an EV without any significant compromise is far, far higher.