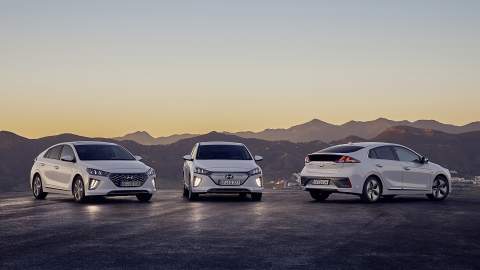 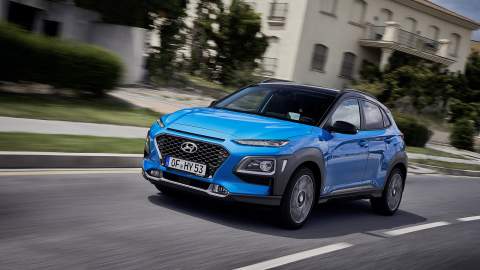 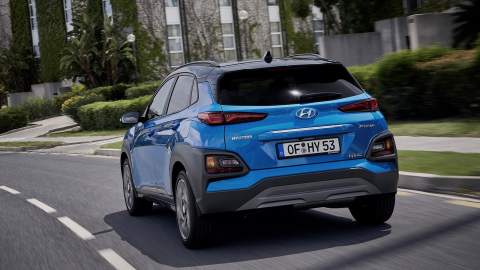 Hyundai announces prices and specifications for New Kona and Ioniq

Hyundai has announced the prices and specifications for its new Kona Hybrid and Ioniq, which is available as a hybrid, plug-in hybrid and battery electric vehicle. With the Kona Hybrid starting at £22,495 and the Ioniq coming in at just £300 more, both cars are a comparatively affordable way into the world of eco mobility without compromising on levels of kit.

We covered the Kona Hybrid when the model was announced back in June but, with it going on sale on September 30, Hyundai has provided more detail on each trim level. Before we do that we'll quickly recap some vital powertrain stats...

The Kona Hybrid lifts its components from the Ioniq Hybrid, which means it gets a 1.6 litre petrol engine and a 43bhp electric motor that draws power from a 1.56kWh battery. Total system power output is 139bhp which is fed through a six-speed, dual clutch automatic transmission. On the WLTP cycle, the Kona Hybrid gets 52.3mpg and emits 90/km of CO2.

For your £22,495 you'll pick up a base-spec SE model which gets a decent array of standard features. In terms of driver aids you're looking at an electric parking brake, wheel mounted paddle shifters, rear parking sensors with reversing camera, lane keep assist and driver attention alert. You'll also get a 7 inch touchscreen with subscription-free Apple CarPlay and Android Auto.

Fork out £27,195 for the Premium SE model and the Kona Hybrid gets LED headlamps with high beam assist, LED rear lamps and automatic emergency braking as standard. Inside, comfort is enhanced with heated and ventilated electric front seats and a head up display. In addition, Premium SE cars get blind spot detection and rear cross traffic alert as standard.

Eight colours are available, but only Galactic Grey is a no-cost option. The remainder will set you back £565.

The new Hyundai Ioniq gets an overhaul which includes some mild styling tweaks, and for the hybrid and plug-in hybrid, regenerative braking. The Ioniq Electric, a larger battery and more powerful motor.

Design-wise, the hybrid and plug-in hybrid models now sport a mesh radiator grille, whilst the electric model features a redesigned grille with active air flaps to assist cooling. All models have new front and rear bumpers, headlamps and taillights. Inside the New Ioniq gets an updated dashboard and instrument cluster, mood lighting and all new touch type controls. A new 10.25 inch navigation system is available on all Premium, Premium SE models across the range.

Whilst Ioniq Hybrid and Plug-in Hybrid only get driver-controlled regenerative braking in terms of a powertrain update, Ioniq Electric has had more of a comprehensive overhaul. The lithium-ion battery pack has been increased in capacity from 28kWh to 38.3kWh and the electric motor now develops 134bhp compared to the previous 107bhp. With regards to charging, 7kW will deliver 100 per cent in just over six hours, whilst at 50kW, 80 per cent charge is achieved in less than an hour. Ioniq Electric has a range of up to 184 miles from full.

With three different powertrain options and trim levels there's a variety of options and prices, so bare with us!

At £22,795 the new Ioniq Hybrid SE Connect is the most affordable way into Ioniq ownership. For the outlay you get 15 inch alloys, LED daytime running lamps, automatic headlamps with high beam assist, rear parking sensors and cruise control. Safety features include autonomous emergency braking, lane departure warning with lane keep assist, driver attention alert and eCall. Inside, buyers get a standard 8 inch touchscreen media centre with subscription free Apple Car Play and Android Auto. This features a rear view monitor, which the driver can select to view as the vehicle is in motion.

The Ioniq Hybrid Premium, which costs £24,695, receives all of the above but with the addition of LED headlamps, keyless entry and stop/start button, heated front seats and various styling enhancements. It also gets a 10.25 inch touchscreen with navigation and Bluelink telematics, as well as wireless device charging.

The plug-in version of the New Ioniq is capable of 30 miles electric-only driving thanks to its 8.9kWh battery. It comes in two trim levels – Premium and Premium SE. The Premium model will set you back £29,950 and comes as standard with kit in-line with the Premium Hybrid model as noted above. Ioniq Plug-in Hybrid Premium SE costs £31,950 and once again, gets a level of kit that's broadly in-line with the straight hybrid model as noted above. Premium SE specification also gives customers the no cost option of Shale Grey or Red Umber interior trim colours.

As per the PHEV version of the new Ioniq, the Ioniq Electric comes in Premium and Premium SE form only. Ioniq Electric Premium will cost £29,950 after the government's plug in car grant and once again comes broadly with the same levels of equipment as Hybrid Premium and Plug-in Hybrid Premium. It does get the LED headlamps with high beam assist and dusk sensor, and the adaptive cruise control with stop/go function as standard.

New Ioniq will be in Hyundai showrooms from September 5.