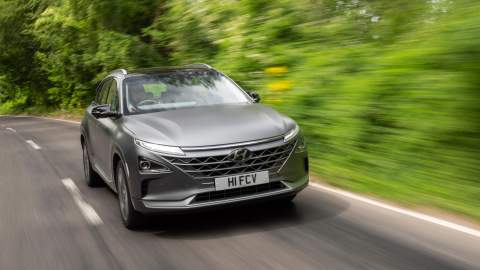 “I think a lot of car buyers in the UK might be a little surprised to find out that Hyundai is a world-leader in hydrogen fuel cell vehicles,” says Ashley Andrew, Hyundai UK's Managing Director, in his first blog post. His kids have taken to calling the brand's hydrogen-powered Nexo “the future”, and Andrew has many reasons to believe that this is the case – over 1000 of them in 2019 alone according to the latest sales figures out of Korea.

It is fair to say that to the average person on the street, Hyundai and cutting-edge fuel cell technology aren't likely to be associated with one another. However, the Korean brand has been very much at the forefront of the development of fuel cell power for cars for two decades. It has now posted sales of over 1000 units globally for the first time since ix35 FCEV (fuel cell electric vehicle) hit the one grand mark back in 2013.

According to Business Korea, sales of the Nexo reached 1075 for the year-to-date on May 17 with 767 sold in South Korea and 308 across the rest of the world. In the whole of 2018, Hyundai sold a total of just 966 hydrogen cars. On top of a limited but ever-increasing hydrogen fuel station network in key markets across the world, a five-star Euro NCAP safety rating, being named a Game Changer at the Autocar awards and a healthy government subsidiary programme in South Korea have helped boost the Nexo's appeal.

In his blog, Hyundai UK MD Andrew practically effervesces not only about the benefits of the Nexo's real-world 414 mile range and zero-emissions, but also the potential that hydrogen fuel cell technology has in numerous other applications. Asking one of Hyundai's hydrogen experts in Korea as to why hydrogen should be the way forward, Andrew says that he was told, “batteries are fine in private cars but the issue gets worse in large commercial uses; ships, planes, buses or trucks” - that is to say that in larger applications, hydrogen power is simply more practical. It's even in use on a limited number of bus routes in London.

The problem, of course, is infrastructure. There are currently just six refuelling stations available for public use in the UK and just 35 are planned to be in use by 2030. So while filling up a Hyundai Nexo is no more taxing or time consuming than dropping £50 worth of diesel in a conventionally-powered car, your local filling station will almost certainly not be stocking Hydrogen and nor will it be any time soon.

What Andrew sees is a transitional period where a variety of different fuels – conventional petrol and diesel, electric charge points, LPG and hydrogen – sit side-by-side while new technology is adopted. FCEVs are certainly lagging on that front; whilst the technology is not new and is most definitely proven, most manufacturers have been developing battery power so as it stands, the Nexo is one of just two FCEVs available for the public to buy in the UK. And it costs around £66k.

He highlights that as a fuel, hydrogen can be produced on-site at a filling station as all that's required is electricity and water. ITM Power, a specialist in the supply of hydrogen to industry, already uses a wind turbine to provide the power to create the gas for filling the tanks of FCEVs – and its filling station is located within two miles of the M1.

However, back in 2013 the situation was essentially the same as it is now in terms of the number of filling stations, and the plans to develop new solutions through companies such as ITM Power. Progress has undoubtedly been painfully slow.

To help drive things forward, Andrew points out that Hyundai has entered into a cross-licencing partnership with Audi for its fuel cell technology. This is specifically designed to allow the German manufacturer access to Hyundai components and supply chain with the end result being that it will be easier for Audi to design and build its own FCEVs – which can only be a good thing for both the development of the technology and in the long-term, consumer choice.

Andrew quotes the film, Field of Dreams – that “if you build it, they will come”. But to quote the film properly, “if you build it, he will come”, and for the time being reducing a plural to a singular may remain the case, in the UK at least, simply because of the lack of infrastructure to support what is a very promising option for EVs.