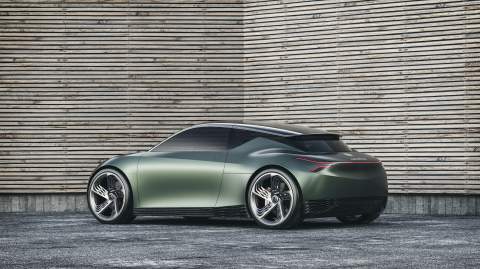 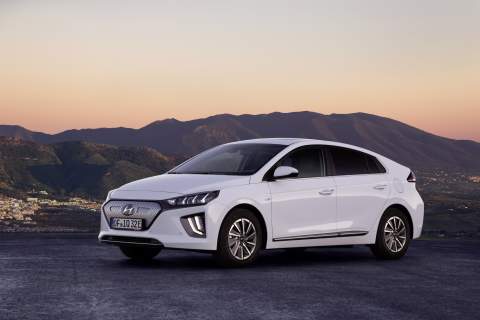 First launched in 2016 and with 60,000 IONIQs on the road and counting, Hyundai has made extensive upgrades to its first eco-friendly vehicle range, which includes the all-electric, hybrid and plug-in hybrid models.

The new IONIQ Electric’s battery has been upgraded from 28kW to 38.3kW. This 36 per cent hike in energy-storage capacity now affords a range of 182 miles (up from 174). Its power output is now 136bhp with 217.5lb-ft of torque and the vehicle is fitted with a 7.2kW on-board charger (up from 6.6kW). At a 100kW fast-charging station, the battery can reach 80 per cent capacity in 54 minutes.

The upgraded IONIQ Hybrid and Plug-in both have the Kappa 1.6-litre GDI, direct-injection, petrol four-cylinder engine giving 105bhp and 108lb-ft of torque. The Hybrid’s permanent magnet electric motor delivers 43.5bhp (with torque of 125lb-ft; the plug-in version’s electric motor delivers the same amount of torque and 60.5bhp. The total output of both engines in the Hybrid and Plug-in vehicles is 141bhp and 195lb-ft of torque.

All three IONIQ models feature Hyundai Blue Link, a connected vehicle system which allows drivers of the Electric to remote start and stop, while all versions allow remote lock or unlock and control of the air conditioning via a smartphone app. There’s also a nifty new safety feature called eCall, which automatically calls emergency assistance if the airbags are deployed or the call button located above the rear-view mirror is pressed.

Aesthetically, there’s now the option of four leather seat colours: Black, Grey two-tone, Red Umber (Hybrid and Plug-in only) and Electric Shadow (Electric only). The Plug-in and Electric are available with redesigned 16 inch alloy wheels; the Hybrid has a choice of 15 inch or 17 inch wheels. And there are four new exterior paint colours, too, which sound like they belong in the cast of X-Men: Fluidic Metal, Electric Shadow, Liquid Sand and Typhoon Silver.

While we’re singing the praises of Hyundai, the South Korean manufacturer picked up the ‘Best EV’ award for its Kona Electric at the Honest John Awards. It’s particularly impressive because the winners are voted for by users of the Honest John website – real people rather than industry insiders and experts.

David Ross, Honest John Editor, said: “The Hyundai Kona is a true electric game-changer. Sensibly priced, easy to drive and capable of covering up to 279 miles on a single charge, Hyundai has delivered the electric crossover that car buyers want.”

It’s powered by a 204bhp or a 136bhp electric motor driving the front wheels and starts from £30,750. But the entire current run of Konas has already been snapped up, so you’ll have to get yourself on the waiting list if you want one.

Interestingly, Genesis, the luxury arm of Korean manufacturer Hyundai, recently unveiled its latest concept car at the New York Auto Show. All electric and designed specifically for the city, the sleek, fluid lines are designed to make the Genesis Mint Concept look as though it’s permanently in motion. But it’s the interior that’s most impressive.

Yes, this compact coupe can only fit two people – on a bench-style seat that can swivel towards either door to make getting in and out easier, no less – but those two people have an awful lot of room to play with. This interior is minimal and finished in swathes of Cognac leather with a funky “G-Matrix” (or criss-cross pattern to you and I) on the floor and the dash behind the steering wheel.

Speaking of steering wheels, this one is oblong and surrounded by six information screens, plus a seventh instrument screen in the centre of the wheel itself. The whole thing somehow looks both futuristic and retro at the same time.

There’s no boot to speak of. Instead, the Mint has a substantial parcel shelf that’s accessed, interestingly, by two gull-wing doors. It could take a few bags, but your entire weekly shop? Probably not.

Outside, it has more than a touch of VW Scirocco about it when you look at it from the front, which is no bad thing, and the Hunter Green matt paint finish is not too brash, but not too boring either.

Should the Mint concept ever make it to production, it is said to have an estimated 200-mile range and fast charging up to 350kW but, at the moment, there are no signs it’ll make it into our cities just yet.