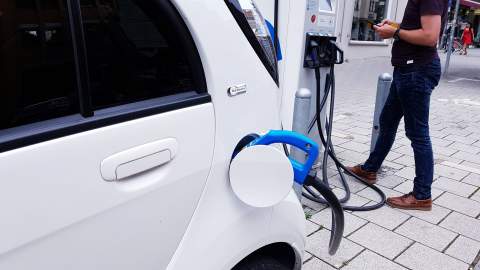 Is the Government pulling its weight with EV adoption?

With the recent adoption of the net zero emission by 2050 target in the UK, there has been a lot of talk about car companies and infrastructure providers stepping up and filling in the gaps in the EV ecosystem. However, there's one key element that often gets overlooked, and that's the role of government in not only pushing the EV agenda, but where appropriate, mandating it.

In off-the-record chats as well as general, industry-wide murmurings, there is a quiet dissatisfaction with the efforts the UK government has so far made to support the uptake of EVs and other alternatively fuelled vehicles. So far a disproportionate amount of the progress has been made by manufacturers and suppliers protecting their own bubble – supporting it by developing and deploying infrastructure. But as vehicle manufacturers move increasingly towards a homogenised offering, surely it's time for the government to support its lofty ambitions with policy and action.

One obvious area that has been overlooked with regards AFVs is in the building standards of new housing. In October 2018 the government released its fifteenth special report on 'electric vehicles and driving the transition' in response to on-going sessions held by the Business, Energy and Industrial Strategy Committee. Off the back of this, a consultation on changing building regulations for residential and non-residential to introduce minimum EV infrastructure took place in early 2019. Now, outline EV-supportive proposals recommend that new homes be fitted with charging points as standard.

Home charging points would be required to have a minimum power rating of 7kW and have a universal socket to cater for all types of EVs currently on the market. Transport Secretary, Chris Grayling, said; “Home charging provides the most convenient and low-cost option for consumers – you can simply plug your car in to charge overnight as you would a mobile phone.”

Not only do the recommendations suggest charging points for new residential developments, it also recommends that non-residential buildings (new or undergoing renovation) with more than 10 car parking spaces be fitted with appropriate charging facilities for one-in-five spaces (that is to say two points per 10 spaces). For existing older non-residential buildings that haven't been renovated, the requirement would be one charge point per 20 spaces by 2025.

The recommendations don't stop there, however, with the government heavily in favour of taking forward regulations “to mandate smart capability for all chargepoints which will help manage of charging on the network, reducing costs”. The UK's National Grid recently released its Future Energy Scenarios report which looks at credible strategies for powering the UK towards net zero emissions and possible developments relating to this.

Within the report there are four scenarios. One of these – the 'Two Degrees' scenario – sees the UK meeting targets of EV adoption and a smart grid in place that is capable of vehicle-to-grid (V2G) exchange. It assumes that 35 million vehicles on the road in the UK would be electric by 2050 (that equates to most of the vehicles on the road) and 75 per cent of these would be V2G-capable. This capacity would enable the UK's EV fleet to store a vast amount of energy – especially less reliable renewable energy – and make it available to balance the grid as required. For example, in this scenario up to 20 per cent of the predicted solar quantum of energy could be stored in EVs at any one time.

Such a scenario relies on centralised schemes to come to fruition to work, whereas at the moment tentative forays into V2G solutions have been localised – such as the ReFLEX scheme in the Orkney Islands. The Future Energy Scenarios covers off a localised approach, too, in its 'Community Renewables' scenario. This relies on the early uptake of EVs and smart technology to broadly the same degree as in the Two Degrees scenario, but promotes local grids and energy generation to meet local needs (58 per cent being locally produced) rather than a centralised approach. Both scenarios envisage 80 per cent of the emissions reduction target.

Most recently, the government has called for all new EV rapid charge points to provide debit and credit card payment by spring 2020. This expectation is designed to draw the charge point industry into line and move it away from disparate subscription options, smartphone apps and membership cards which can make the existing experience disjointed and – for new EV owners – daunting.

On the same day BP Chargemaster announced that its existing 50kW Polar network would be upgraded to take contactless card payments and all new 50kW and 150kW chargers would come as standard with the functionality. The company is planning on rolling out the initiative by summer 2020, and is also committing to retrofit their existing UK-made rapid chargers with this technology over the same timeframe.

Government-applied pressure is very good news for EV buyers and owners as it simplifies the whole process of paying for charging from a variety of different suppliers. Many of the issues surrounding EV adoption are based on a lack of standardisation, so getting the simple act of paying for charge point use right is a step in the right direction.

Any company car driver opting for a pure EV will pay no benefit-in-kind in the 2020/2021 tax year – a revision to the tax rates initially released according to an article on Fleet News. For any pure EV registered after April 6th 2020 the BIK rate has been reduced by two per cent, meaning they will pay no BIK at all. For cars registered prior to April 6, the reduction has also been extended meaning that they too will get the zero per cent rate.

These rates will increase in subsequent years so the zero per cent BIK deal won't last forever, but in the interim it's definitely a positive step to encourage fleets and company car drivers to go green. If you're a company car driver we can recommend a visit to the Fleet News article to get a detailed picture of what's coming and how it will affect you.

Where government is concerned progress is almost always going to be slow, and so it is with the issues surrounding EVs. Whilst many of the big strategic decisions can be made centrally, the trouble is that the UK operates a devolved system of local governments, each of which will have their own policies and standards, not to mention agencies such as the Highways Agency and National Grid. Bringing all of these parts together isn't going to happen overnight, but the government is at least beginning to pull its weight.