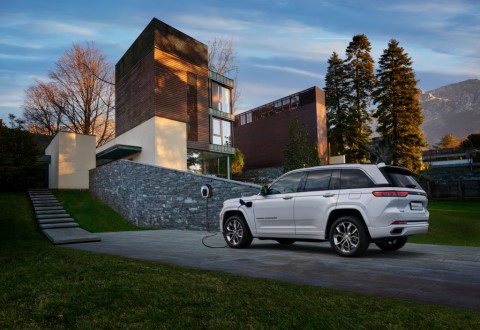 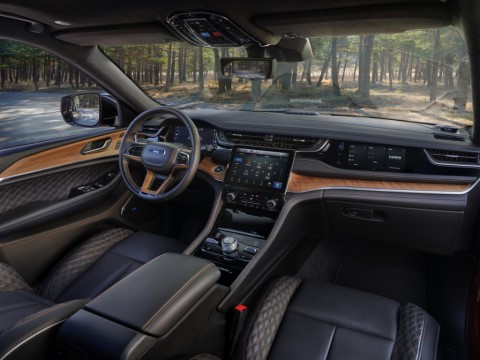 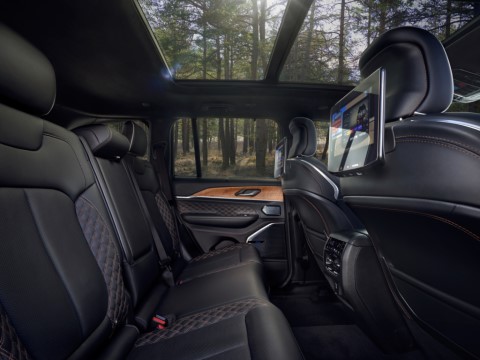 Jeep’s electrification of its small model range has taken another step with the opening of orders for the Grand Cherokee 4xe – the third PHEV after the Renegade 4xe and Compass 4xe. Now in its fifth generation, the Jeep Grand Cherokee 4xe brings a full interior and exterior refresh along with PHEV power.

Jeep is working to what it calls its future of “zero emissions freedom”, with its contribution to zero emissions to date being limited to around 28 miles of range in its ‘4xe’ branded SUVs. Slow progress is still progress we guess, and the Grand Cherokee is arguably the brand’s most well-known model on these shores, having sold relatively well here since its inception in the early 90s.

With the fifth generation Grand Cherokee 4xe, Jeep hopes to continue its move towards greater refinement, on-road handling and connectivity, whilst retaining the off-road capability that it is known for. Given that more than one in three Jeeps sold in Europe so far in 2022 were plug-ins, introducing a 4xe flagship is evidently a sensible move.

The Jeep Grand Cherokee 4xe is based on a new platform which is built with electrification in mind. It gets a 2.0-litre turbocharged petrol engine combined with an electric motor mounted within the eight-speed, TorqueFlite automatic transmission which replaces the torque convertor. Twin clutches manage the power blend between the petrol motor and electric motor, meaning that when the Cherokee is in electric mode, the petrol motor is disconnected.

Total system power is 380hp and 470lb-ft of torque, enabling the Grand Cherokee 4xe to hit 62mph in 6.3 seconds whilst also being able to tow up to 2300kg. For the mud pluggers out there, of which we doubt there are many who will opt for a £70k SUV, a low-range two-speed Quadra Trac II gearbox offers a craw ratio which, combined with Quadra Drive II, means the Cherokee has genuine off-road capability. It can clear almost a foot of terrain and drive through around two feet of water, not that many people will.

Back in the real world, a 17kWh battery pack powers the 400-volt system and enables a WLTP range of up to 28 miles. In urban settings, this can be eked out to over 30 miles. Official fuel economy is just over 97mpg.

At 4910mm long, 2150mm wide and with a wheelbase of 2964mm, the Grand Cherokee is a big car – sitting between a Range Rover Velar and a regular Range Rover in terms of size. The Cherokee is still unequivocally a Jeep, but it has moved forwards in design terms thanks to clean, slimmer details – such as the front and rear lights which are much neater than previous generations.

A lower, tapered roof is both aerodynamically efficient and more dynamic looking, whilst a lower waistline has extended the glass area, increasing the feeling of spaciousness inside whilst offering better outward visibility. Up-front, Jeep’s seven-slot grille is present and behind a revised facia sits the long-range radar and other sensors. The front grille has active shutters to improve aero, heating and cooling performance, too.

Jeep has aimed to up the quality and features inside the Grand Cherokee across the range. Two 10.1-inch digital screens make up the instrument cluster and central touchscreen, whilst in a segment-first a third 10.25 inch passenger display is now on offer. The centre console has updated switches and new, slimline air vents, as well as a storage area with a wireless phone charger.

Augmenting the instrument cluster is a 10 inch head-up display, whilst connectivity is offered via both Apple and Android operating systems with both Amazon Alexa and Google Home voice assistants integrated. Two phones can be connected to the car via Bluetooth simultaneously whilst on-board 4G Wi-Fi can connect up to eight devices at once.

Front seats offer 16-way adjustability as well as massage function in higher spec cars. Heating and cooling is also available for front and rear-seat passengers. Customisable LED interior ambient lights with day and night settings are offered on some models, and a 950 watt McIntosh audio system is also an option.

In terms of driving aids, full-speed collision warning and active braking, rear cross path detection, adaptive cruise, active lane management, blind-spot monitoring, rear view camera and sensors plus other active and passive systems are either standard or can be specified.

The Jeep Grand Cherokee 4xe is available to order now with prices starting at £69,900 for the base-spec Limited model. The Trailhawk version costs £73,900, Overland from £75,900 and the ultimate Summit Reserve starts at £82,900.