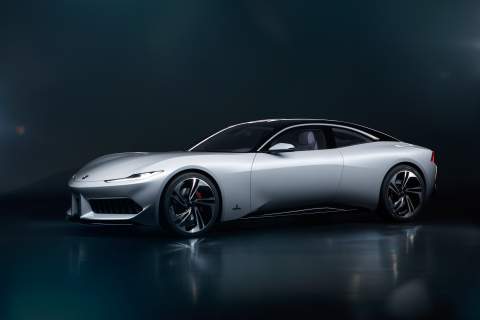 Remember the Fisker Karma? Don’t worry, neither do most people. It was brought back to the market in 2016, updated and rebranded as the Karma Revero and now, three years on, it’s been given a much more substantial overhaul and a GT suffix. And this is just one of three new vehicles brought to Auto Shanghai by Karma.

Looks-wise, the hybrid Revero GT is pretty similar to the Revero; the big changes come in the powertrain. Chinese-owned, California-based Karma has turned to BMW for a turbocharged 1.5-litre 3.0-litre cylinder engine to power the on-board electric generator. The total output from the electric drive system is 528bhp and 549lb-ft of torque. It can do 0-60mph in 4.5 seconds and has a limited top speed of 125mph. The 28kW battery pack can cover 61 miles in full electric mode, while the BMW engine offers an extra 280 miles’ range.

Karma’s second offering, the Pininfarina GT coupe, is creating a bit of a buzz. Essentially, it’s the hybrid Revero GT in terms of facts, figures and powertrain, but it’s been given a healthy dose of Pininfarina flair to transform it into an elegant, sporty coupe with a shorter rear overhang and a longer bonnet. A spokesperson for Karma was keen to point out that this is “the first time in its history that Pininfarina graced a collaborative project with its GT [designation].” And when you consider that the Italian design firm normally reserves the GT badge for only its best in-house creations, that’s quite a coup for Karma.

The final vehicle of the trio – the all-electric SC1 Vision Concept – is a much more in-your-face car. This open-top roadster is all scissor doors with blue interior strip lighting and an F1-style steering wheel, while its lack of a front grill means it has something of a Tesla Roadster about it, albeit with a far, far longer bonnet. Were this slightly bonkers creation to come to pass, we’d be looking at a two-seater, open-top electric vehicle with supercar performance – anywhere between 700 and 900bhp and well over 738lb-ft of torque.