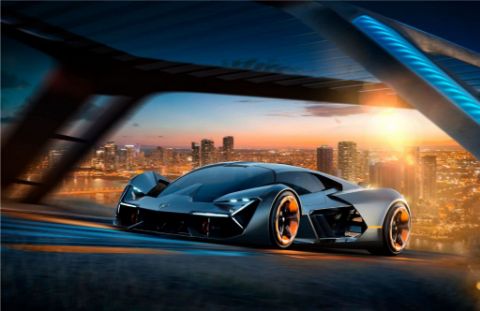 Okay, Lambo aren’t going totally electric, but considering all the other big supercar players (McLaren, Ferrari and Porsche) have embraced hybrid technology, it seemed only a matter of time before Lamborghini would follow.

According to Car magazine, the LB48H – a working title, of course – is set to replace the Aventador in 2020, keeping the naturally aspirated V12 engine and supplementing it with three electric motors – two up front and one at the back with the V12. The electric units are rumoured to produce a combined output of 400bhp, while the 6.5-litre petrol motor is good for 759bhp, so we’re looking at somewhere near 1100bhp. Fast is an understatement.

Looks-wise, it’s said to draw inspiration from the Terzo Millennio concept, so it’ll likely have all the mean-looking, wedge-like brilliance that Lambo is so famous for. It’ll draw the crowds at its rumoured launch at September’s Frankfurt Motor Show, that’s for sure.

If Lamborghini can retain the lung-busting performance of the Aventador and combine it with better CO2 emissions and fuel economy that the electric motors will inevitably bring, surely a fully electric car from the Italian supercar stable will be a serious consideration further down the line…

Frankfurt International Motor Show – a festival for an electric future