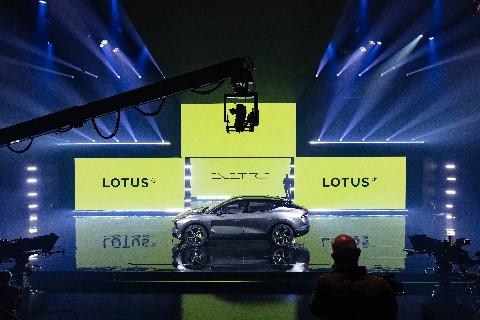 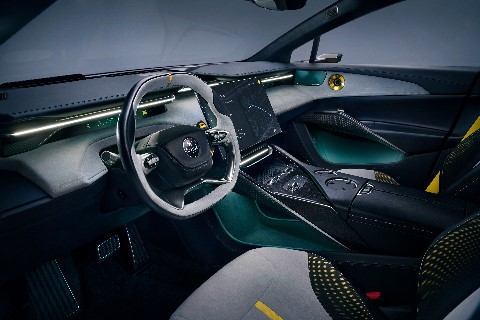 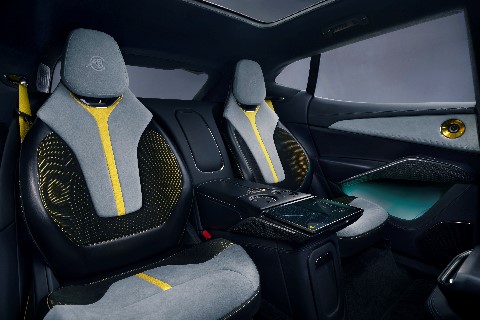 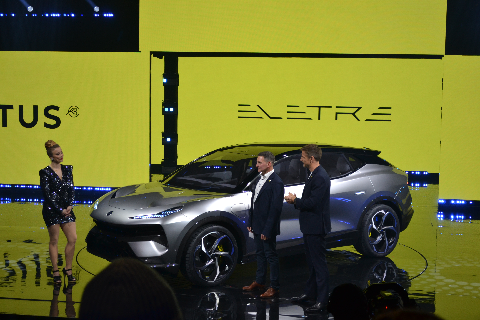 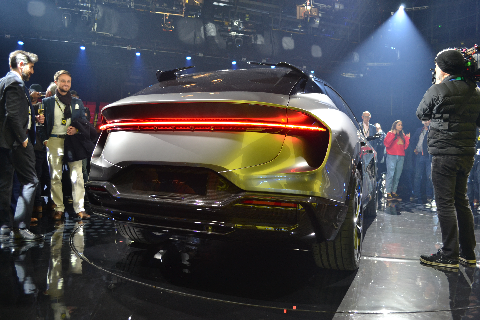 Lotus reveals the first of A NEW BREED OF premium lifestyle electric performance vehicles. Previously known only by its codename, Type 132, the Eletre marks a complete turn in direction for Lotus but can the sports car manufacturer evolve just as Porsche has done by entering the SUV market?

When it came to the global premiere of Lotus’ Type 132, now revealed as the Eletre, the British car brand certainly pulled out the stops. Hosted at the BBC Television Centre in west London, carefully selected members of the motoring press arrived to a yellow (obviously) carpet and publicity backdrop where various snappers captured their surprised faces (we’re not used to being the other side of a camera!), before being ushered into a studio and greeted with champagne and canapes. Celebs mingled with hacks (I had Jodie Kidd sitting behind me) in the audience as we were treated to an hour of pompous and fanfare before the world’s first electric hyper-SUV was driven onto stage by none other than Jenson Button.

It’s no surprise that it was such a glitzy affair, this is an important vehicle for Lotus – it is the first car in the company’s history to have four doors and while it has as much in common with an Elise as a highly aerobatic aircraft has with a jumbo jet, the brand can’t survive if it doesn’t evolve – especially in a market gripped by SUV mania. Just look at Porsche: once devoted entirely to sports cars now its best-selling models are SUVs, and in January we learnt its pure electric Taycan outsold the 911 in 2021! When Lotus came up with their Vision80 plan in 2018, based on three key pillars – transforming the business, revolutionising the product range and delivering results every year – they clearly knew what they were doing.

So, while this 5.1m long, 2.2m wide and 1.6m tall car tips the scales at 2.2 tonnes, it still promises to be every bit ‘Lotus’ as its predecessors, as the design mantra ‘carved by air’, together with the hashtag ‘aeroking’ was repeatedly reinforced throughout the evening. Its PR people were also keen to drive home the fact it is British born but globally raised – I guess they have to get around the fact it’s now part of the Chinese Geely group somehow, rather than independent, but where would Lotus be now without them – and JLR for that matter?

Design-wise it looks like so many other luxury SUVs on our roads now – there’s elements of the Ford Mustang Mach-E, Jaguar i-Pace, Lamborghini Urus and Audi e-tron about it – but as Jenson Button was keen to point out (or be told?) take the badges off and it’s clearly a Lotus. In all fairness, there is a design continuum from the Evija and Emira, with what Lotus term ‘porosity’, which basically means air flows through the vehicle for improved aerodynamics, speed, range and overall efficiency. In fact, it boasts the most advanced active aerodynamics package on any production SUV.

Rather than bore you with talk of active grilles, air channels and exit vents, one of the designers summed it up very nicely: imagine it to be like a butterfly net swooping through the air rather than a parachute. Peter Horbury, Senior Vice President, Executive Advisor, Design, Lotus, added: “The Eletre presented us with a rare creative opportunity in performance car design – the chance to start with a blank sheet of paper and develop an all-new vehicle that takes a brand in a completely fresh direction. The electric powertrain has inspired a ‘cab-forward’ design that echoes the iconic mid-engined layout of Lotus sports cars, creating a unique look and position in the SUV segment.”
Indeed, with no traditional engine the designers could shove everything forwards, so you’ll notice that the bottom of the windscreen sits above the wheels, and it’s certainly dramatic in the flesh, with its cab-forward stance, very short front and rear overhangs, muscular haunches and taut lines.

The car presented on stage sat on 23 inch five-spoke alloys with carbon fibre inserts (to aid, yep you guessed it, air flow) and 10-piston caliper brakes. Its headlights and the rear light ribbon use RGB LEDs, the combination of which can conjure up 16 million different hues enable it to ‘communicate’ with the owner and other road users – such as charging status. All the black components are finished in more of that expensive weave while the body panels are aluminium. There’s flush door handles like the Telsa Model 3 and the door mirrors are replaced by an Electric Reverse Mirror Display (ERMD), which houses three different cameras, like the Audi e-tron.

With power outputs starting at 600hp we’re told the Eletre will achieve zero to 62mph in less than three seconds before going on to a top speed of around 161mph thanks to a motor on each axle, all-wheel drive. An all-new and highly versatile 800v Electric Premium Architecture (EPA) allows 350kW charging capacity you’ll be able to claw back 248 miles in just 20 minutes, and they’re quoting of a target driving range of circa 373 miles.

It has five-link suspension at the rear, and all versions ride on air suspension with continuous damping control. Active ride height, active rear axle steering, an active anti-roll bar and torque vectoring via braking are all available. All Eletres come with four drive modes, which adjust the steering, damper settings, powertrain and accelerator pedal response: Range, Tour, Off-Road (just to tick the box that very few people will ever test out) and Individual.

We weren’t allowed to touch the car so the interior could only be viewed through the windows but it’s a far cry from what you might expect of a Lotus, which traditionally being lightweight there’s very little inside them! When you’re attaching what will no doubt be a £100k price tag to a car you need to have something to show for it. It’s certainly the most ‘connected’ Lotus ever and packed with pioneering technology, such as the world’s first deployable Light Detection and Ranging (LIDAR) system in a production car.

Ahead of the driver the traditional instrument cluster binnacle has been reduced to a slim strip less than 30mm high to communicate key vehicle and journey information and it’s repeated on the passenger side, where different information can be displayed, which is pretty cool. The 15.1 inch central touchscreen is the latest gen OLED, and 95 per cent of its functionality available within three touches. There’s also an interior light bar that communicates with the driver, illuminating when there’s an incoming phone call for example – tech for tech’s sake in our view and nothing special – the VW ID.3 offers something similar.  There were only four individual seats, but a more traditional five-seat layout is available.

From what we could tell it’s a very tactile, high quality place to be with lashings of carbon fibre and sumptuous textiles, while renowned British specialist KEF supplies hugely powerful bespoke audio, and the UI will constantly update and evolve, with over-the-air software updates. The centre console includes a storage tray with wireless charging for mobile phones, as well as twin cup holders which sit flush to the surface until they’re needed, the doors will take a litre bottle. The smart design is continued in the rear of the car.

The Eletre, which aptly means ‘Coming to Life’ in some Eastern European languages, marks the start of a new chapter in the history of Lotus as its first ‘accessible’ EV (the Evija cost around £2 million) and the first SUV. It’s said to share the same revolutionary aero performance as its electric hyper car sibling, and have the heart and soul of the Emira, so it’ll be interesting to see how true that is when we’re allowed behind the wheel, and we for one can’t wait! 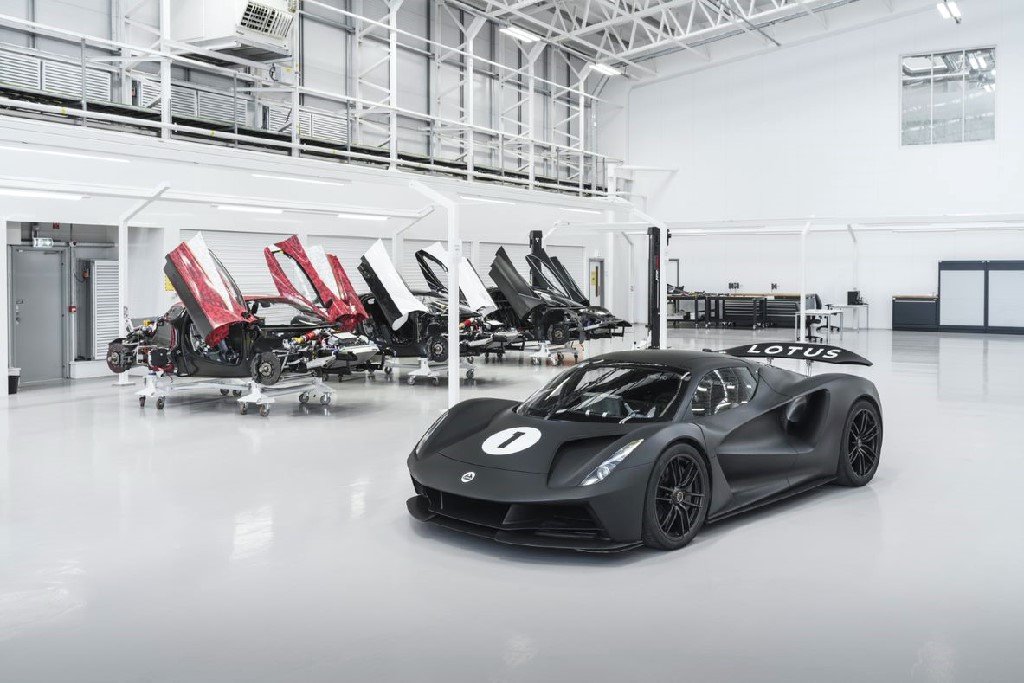 Tesla applies to become energy supplier in the UK