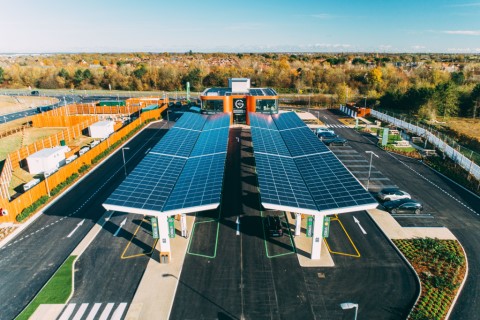 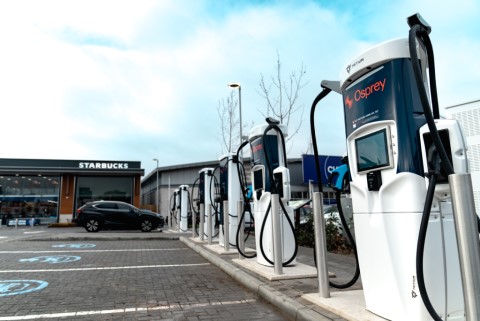 After the hugely successful launch of its inaugural Electric Forecourt in Braintree, Gridserve is powering ahead by working on 11 new ultra high-power Electric Hubs and two new Electric Forecourt locations. Alongside this, Osprey Charging has opened its first high-power charging hub as it begins a UK-wide roll-out.

Gridserve is branding it the “biggest upgrade to motorway EV charging infrastructure in UK history”. Taking the form of more than 20 Electric Hubs, of which 11 are under construction, and 30 Electric Forecourt sites, of which two are underway, Gridserve will soon be offering ultra-rapid charging at strategic locations across the country.

The company’s so-called Electric Hubs will feature between six and 12 350kW-capable chargers, enabling charging rates of around 100 miles in 10 minutes on compatible cars. These are set to be installed at existing service stations, providing quick charging and convenient contactless payments at 20 motorway service areas by the second quarter of next year.

In addition to the Electric Hubs, which utilise existing service infrastructure, two new Electric Forecourts – like that in Braintree – are under construction with one at Gatwick and one in Norwich. These are dedicated EV charging stations which offer the same ultra-rapid charging capability as the Electric Hubs and facilities as a service station, but without the need to share the space with ICE vehicles.

Of the two under construction, the Gatwick Electric Forecourt is the furthest along. Located adjacent to the M23, it will have the capability to charge 36 EVs simultaneously at up to 350kW. As with the Braintree site, owners will benefit from on-site refreshments, spaces to sit and free Wi-Fi, safe in the knowledge that every kilowatt going into their car has been generated using completely renewable solar energy.

Osprey Charging has also jumped on the hub-based bandwagon with the opening of its first high-powered EV charging hub in Croydon on 17 December as part of a planned UK-wide roll-out. Located at Purley Cross Retail Park, a site with almost 20,000 passing cars per day, it features six chargers in total with four able to charge at up to 75kW, and two capable of 175kW – adding around 100 miles of charge in 10 minutes on compatible cars.

This inaugural charging hub from Osprey is the first of 150 which the company hopes to have established by 2025.

Good news for both Osprey and GRIDSERVE users

For users of these EV hubs, there’s some more good news with both ranking in the top five most popular charging providers according to a Zap-Map survey. Osprey, which ranks third according to the survey, was praised for being “reliable, easy to use and with contactless payment”, as well as having good locations and compatibility for all types of EVs including both AC and DC charging.

GRIDSERVE ranked fifth (joint with Shell Recharge) overall, albeit it topped the charts for facilities. Given the company’s business model of locating its chargers alongside what is effectively a roadside service station with food and drink outlets as well as seating and free WiFi, this isn’t surprising.

The top five providers were InstaVolt, MGF EV Power, Osprey, Pod Point and GRIDSERVE/Shell Recharge (joint fifth). Lagging at the bottom of the pile, from last to fifth last, were Ecotricity (which will be absorbed by GRIDSERVE in due course), Charge Your Car, BP Pulse, EV Charge Online and Source London.

The need for more public charging

Whilst these developments in both the number and quality of charging facilities is good news, more does need to be done. According to the Society of Motor Manufacturers and Traders (SMMT) the number of plug-in car per public charger has gone from 11 in 2019 to 16 in 2020. This puts the UK as one of the worst among the top 10 EV markets, with South Korea having a 3:1 ratio, Netherlands a 5:1 ratio, China 9:1 and France 10:1.

With one-in-six new cars registered to date in 2021 coming with a plug, this ratio is likely to get worse.

Of course, the disparity is driven by the fact that EVs are now more popular than ever – a good thing – but the charging industry has failed to keep up with demand. Furthermore, people without the capability to charge at home are going to find themselves at an increasing disadvantage, potentially stalling the uptake of EVs before the 2030 deadline for the end of new petrol and diesel sales.

Charging hubs will go some way to meeting the demands of those who don’t have home charging. However, more development of neighbourhood and local charging schemes now needs greater investment and supportive legislation.