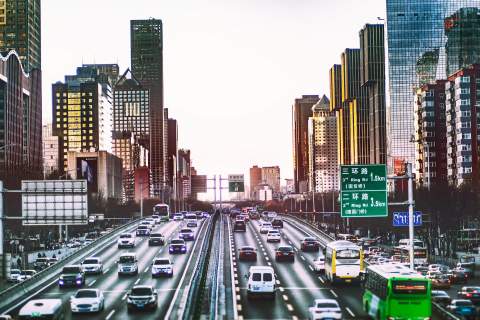 How will Coronavirus impact the EV market? Ben White gives his opinion

In a very short space of time, the Coronavirus pandemic has altered our everyday lives, and those of most of the world's population, unimaginably. Entire countries from India to Ireland are locked down to help quell the spread. With much of the global car industry having ground to a halt, air quality has shot up. But as the world drags itself back into normality, what might the affect be on the EV market?

Do you remember the days when you could pop down to the shops for a bag of skittles and a copy of the Beano? Those days when toilet roll and baked beans weren't being sold on the black market and going outside wasn't punishable by a fine? There were also those times, back in the day, when going to work meant attending a thing called an 'office' and meeting 'people'.

But two weeks is a long time. And with the current, terrible situation unfolding across the world, normality has been turned on its head. In our own little microcosm – that of electric vehicles – things have been turned upside-down just as much as in other businesses.

Factories across the globe have shut down to stop workers getting ill, with most large European manufacturers pausing operations (it's costing VW a reported $2.2 billion per week). In the USA the 'Big 3' of Ford, GM and Chrysler (including Fiat) have been joined by Honda, Hyundai, VW, Toyota and BMW to close either all or some of their operations - and that's in a country that appears to be severely lacking on cohesive governance on the subject.

In Wuhan, China, where the virus was first discovered, there is – or at least was – a booming car industry. Wuhan is China's “motor city” and is home to GM, Honda, Nissan, Peugeot and Renault, accounting for around 10 per cent of the entire country's vehicle manufacturing capacity. These plants closed down in response to the virus, aiding the 92 per cent fall in car sales in China during the first half of February.

In short, the global car industry has been in free-fall. But what does all of this mean for EVs specifically?

Let's start off with something to smile about in all of this pain, upheaval and individual struggle. Without wishing to downplay the severity of what's going on in any way, the world must be breathing a sigh of relief for a brief moment. In China, CO2 emissions dropped by around 25 per cent for January vs the same month in 2019. Nitrogen dioxide levels across the country are between 10 and 30 per cent lower than normal with instances of “good air quality days” up by 21.5 per cent in February.

It's the same story across the world with air travel, miles driven and industrial output hitting the deck in the most dramatic fashion for over a decade, and in some cases since the second world war. Globally, the quality of air has improved, and with people confined to a lesser or greater extent to their homes, nature has been able to get a break from our harmful activities.

From a purely personal point of view as someone who cycles an inordinate number of miles, the quality of air 'feels' better and reduction in the amount of pollution-related crud that amasses on me during a ride has reduced noticeably. More to the point, the joy of cycling on lightly trafficked roads is unbridled, as is the ability to hear birdsong at rush hour next to a main road, or take a walk into town (for essential shopping) without the noise and smell of petrol or diesel cars.

I'll let you into a secret too; I don't drive anywhere on a weekly basis. I haven't done for years, and the improvement in my physical and mental health has been stark. I'm certain people are finding this out for themselves, and whilst working from home can be rubbish at times; at least nobody is wasting hours sitting in traffic.

When I cycle the 20-mile return trip to the office each day during normal times, I often find myself wondering what on earth people are getting from sitting in traffic while I enjoy a spot of physical exercise – and get to work before them. Time, to me, is the most valuable currency and I hope people are realising that it's wasted when making unnecessary journeys, or journeys that would be much more enjoyable on foot or bike.

I don't suppose for one second there'll be a mass sustainable transport awakening after all this, but I do think that people might feel the change in the air and not only consider their driving habits, but also look towards EVs as a way of maintaining cleaner and quieter roads.

There's an argument to be made that the Coronavirus pandemic could be the beginning of a climate change fight-back. By necessity it has altered people's behaviour and hopefully made them consider their own actions under a microscope. If people can do this for a disease which is bad, but will kill far fewer people than the effects of climate change this year alone (a conservative estimate is 250,000 with a further 100 million forced into extreme poverty by 2030) you'd hope that they could expand their thinking and apply it to a far greater and more pressing threat to humanity.

One last little nugget to warm the cockles is the way in which some car companies have responded to the crisis. MG Motor UK and its dealer network have supplied 100 MG ZS EVs to the NHS and its agencies to support the fight against the disease. In the USA, Tesla has jumped on the opportunity to produce ventilators, and other manufacturers are doing likewise, so at least community spirit remains.

There are opposing schools of thought on how this current crisis will impact the immediate future of EVs. Some reckon that, with Chinese car manufacturing now stuttering back into life as the spectre of the Coronavirus gently and very slowly recedes, battery makers and the country's burgeoning EV sector will get a few months to build up capacity to get off the front foot for when demand returns in the west.

On the flip-side of this is the argument made by, among others, Sandy Munro of Munro & Associates – one of the US auto industry's foremost analysts. He reckons that for major established motor manufacturers, returning to profitability as quickly as possible is going to be top dead centre of their way of thinking. According to Munro, in the US this will manifest itself in the upscaling of production of pick-ups and large SUVs. Car makers may also opt to pull budget from R&D in favour of being able to placate shareholders.

On top of this, back in China the EV market has suffered thanks to reduction or removal of government subsidies – not to mention the number of perilously financed start-ups.

In an article for the BBC, Scott Kennedy from the Centre of Strategic and International Studies said: “China's auto market was already reeling from a large drop in demand in 2019. In 2020 no carmaker has been immune to the effects of the Coronavirus. That includes everyone from the oldest joint ventures producing internal combustion engine SUVs to the most innovative upstarts making connected electric vehicles.

"The vast majority [of electric car makers] will not survive. But how long they survive and whether industry consolidation occurs through lots of mergers or bankruptcies will depend on the willingness of the government."

Back in the west, and with so many people destined to be hit hard by reduced wages, patchy work or even losing their jobs, the new car market is going to take a hit. And many people who might have considered an EV may now set their sights on something cheaper – and powered by petrol or diesel. Those wanting an EV from the likes of VW, Renault, Nissan or another big name manufacturer may even find that they have to wait until production picks back up again. This will take a while as car manufacturers are going to be ploughing their efforts into their most profitable cars.

Another potential issue lays within the planned merger of PSA (Peugeot Citroen Group) and Fiat Chrysler (as reported by electrek). A big part of the forward plans for what would become the world’s fourth largest car maker was sharing the cost and burden of developing EVs, with some of the more advanced companies like Peugeot, Citroen and Opel dragging the Fiat Chrysler brands kicking and screaming into the 21st century.

According to the report by electrek, Karl Brauer from industry analysts, Kelly Blue Book, said: “Assumptions about valuation of the companies, revenue projections, sales for 2020, and beyond for both companies, all those mathematical assumptions that were made during the talks essentially have to be re-evaluated now.”

In terms of the market rebound and associated (potential) return of emissions, there is a recent precedent that we can look upon as an indicator – and it's not good news. During the crash of 2008-2009 overall emissions dropped by 1.3 per cent, but come 2010 when things were bouncing back they rebounded, leading to an all-time high.

Julia Pongratz, professor for physical geography and land use systems at the Department of Geography at the University of Munich, studies historic epidemics and their global impact. Talking to the BBC about the Coronavirus epidemic recovery she said: “There are hints that coronavirus will act the same way (as the 2010 recovery). For example, the demand for oil products, steel and other metals has fallen more than other outputs. But there are record-high stockpiles, so production will quickly pick up.”

The trick for EV makers is going to be restarting their production to fulfil orders quickly. This will need to be backed up by continuing, or even expanded government incentives to ensure that the momentum of lower emissions and new attitudes to travel aren't lost as people begin to get back to normal.

Tarnishing all of the predictions and musings around the EV market is the fact that Coronavirus has taken hold and cost lives in the first place. From a purely human point of view it's a nightmarish thing that is occurring and I really feel for anyone who has been affected by the disease itself or the outfall from it. Uncertainty like this exposes just how perilous economies and many of our lives are.

As mentioned earlier in this piece, the fact of the matter is that some companies involved in the manufacture of EVs are going to go under – and not just Chinese start-ups. Component suppliers in Europe, the UK and the US will cease trading, potentially putting back some of the progress which has been so strong and continuous for over half a decade now.

Perhaps the worst thing for everyone is the uncertainty over what will happen next. Other than disruption and an illness that is yet to peak in severity, we simply don't know when things will begin to return to a form of normality. Some government ministers reckon that it will be at least 12 months until vaccines and robust healthcare measures have enabled things to settle down. In the short-term, we still don't even know when we'll be allowed to resume going outside without good reason!

There is light, in that Polestar has resumed production in China, and other factories are slowly getting back online elsewhere as well. But in the meantime, all we can do is follow the official advice, look out for others as much as it is practicable, and hope that when things settle down, we come out of this stronger as a society and with regards EVs, more resilient as an industry.