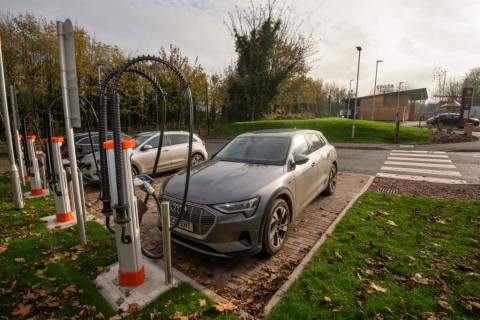 A new charging hub has opened in Wolverhampton. The first of a planned 150 stations implemented by Osprey Charging, it is also the first ultra-rapid station in the region which takes on the hub-based set-up like we have seen elsewhere in the UK but debuts new charging tech to speed up the process.

The notion of charging hubs, which are akin to fuel stations for EVs, is growing in popularity as we head towards the 2030 ban on the sale of non-electrified new cars. Perhaps the highest profile of these to go online so far is the GRIDSERVE Electric Forecourt in Braintree, Essex, which opened in December last year.

Now, Osprey Charging has opened the first of a planned 150 charging hubs as part of a £75 million investment in UK-wide infrastructure. Located in Wolverhampton in the Midlands, it is the first hub in the region – helping to redress the imbalance in accessible, convenient public charging – and will make it easier for the existing 45,000 EVs registered in the area to juice while on the move.

It’ll also help future-proof public infrastructure ready for the predicted 1.7 million EVs on the road in the region by 2030 and plays into the recently introduced Birmingham Clean Air Zone.

The hub itself is located on the A463 south of Wolverhampton on a stretch that sees around 130,000 vehicles pass daily. It consists of four chargers which can deliver 150kW of DC power, charging at around 100 miles per 10 minutes. An on-site Costa Coffee enables drivers to grab a drink or use facilities while their car charges, too.

Where the Osprey Charging hub differs from other, similar facilities around the UK is in the charging technology it is debuting. Developed by Kempower, it uses dynamic load balancing across all chargers to ensure that they can dispense power at an optimal speed.

This is beneficial because power demand varies significantly between individual cars depending on their maximum input, and current state of charge. By optimising the available power across all plugged-in cars, it reduces charging times and therefore the availability of the chargers themselves. According to Osprey, the chargers also have a far smaller physical footprint, meaning that there is more flexibility in where charging hubs can be located.

Whilst the Wolverhampton hub is comparatively small, with just four chargers, the roll-out across 150 locations will see Osprey installing a total of 1500 charge points of 150-175kW. The largest sites will be home to up to 12 chargers and all sites will be strategically located. Making things easier for users is the fact that no subscription is required, with payment by contactless being standard across sites.

Ian Johnston, CEO at Osprey Charging, said: “The opening of our high-powered charging hub in Wolverhampton – the first of ten in construction this year – once again puts the region at the leading edge of innovation, marking a step change in the UK’s EV infrastructure as we accelerate towards mass adoption of EVs. The site, which deploys multiple high-powered chargers, will provide a blueprint for hundreds more right across the UK, meaning no waiting times for drivers and an overall outstanding customer experience.”