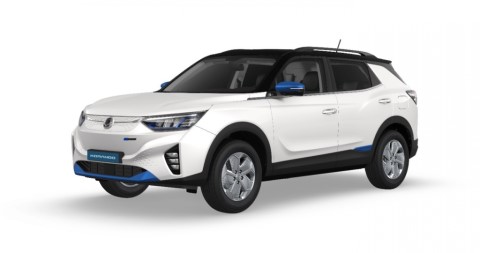 There’s a new entrant to the UK’s EV market. South Korean brand SsangYong will launch its EV the Korando e-Motion into the European market in early 2022, competing with the likes of the MG ZS EV and even the lowlier versions of the Hyundai Kona Electric and Kia E-Niro.

Details of the electric version of SsangYong’s mid-sized SUV aren’t confirmed for Europe just yet with an announcement expected early next year. However, we don’t expect them to deviate from those of the Korean version revealed earlier this year as the struggling brand put forward a plan to secure its future.

Likely to be competent rather than a stand-out competitor in any particular dimension, it’s still good to see a new entrant into the UK’s EV scene.

The Korando e-Motion is based on the petrol version with a powertrain swap rather than a bespoke platform. It’ll be on the money in terms of battery size, with 61.5kWh available offering a WLTP driving range of 210 miles. This is more than the previous-generation MG ZS EV, for reference. Charging between 20 and 80 per cent on DC current should take just over 30 minutes

A punchy 188bhp motor with 265lb-ft of torque driving the front wheels should offer all the performance that anyone could realistically want from a C-segment soft roader. Whilst there’s no quoted 0-62mph time, a top speed of just over 100mph is par for the course.

Compared to the standard, petrol-powered Korando, the E-Motion has a closed off grille and some aerodynamic touches on the front and rear bumpers, with the same treatment to the 17 inch alloys. Blue details on the exterior also set it aside from its conventionally powered counterparts.

The interior has various blue accents on the controls and should be well equipped – at least on a level with the MG ZS EV. Infotainment comes from Apple CarPlay and Android Auto via a 9 inch central touchscreen. Key controls, such as the dual-zone climate control, are still presented via buttons and dials. The driver gets a 12.3 inch digital instrument cluster. Wireless phone charging, heated seats all-round and steering wheel are all available – albeit we don’t know what will be optional and standard in the UK just yet.

It’ll be a practical family wagon thanks to 551 litres of boot space with the seats up and 1248 with them stowed – exactly the same as combustion models.

A variety of driver aids should ensure the Korando E-Motion is NCAP-friendly. Lane keep assistance and departure warning, autonomous emergency braking, adaptive cruise, driver attention and safe distance warning are just some of the technologies that will be available.

There’s no official word on price, but according to some sources, it is set to start at the equivalent of £30,750 in mainland Europe. If SsangYong can stick to this figure within the UK, it’ll fall within the all-important plug-in car grant range, potentially tempting people away from competitors that can’t match that price point.

We’ll update this story as soon as we have UK-specific information.