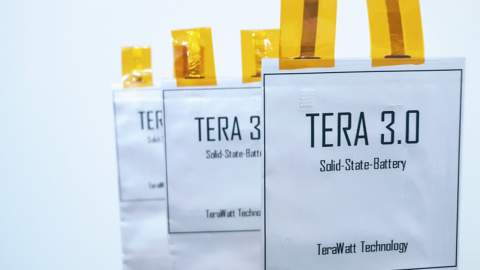 Silicon Valley-based battery boffins, TeraWatt Technology, has confirmed that its 'Tera3.0' 4.5Ah solid-state battery has achieved a frankly stunning 432Wh/kg energy density. We don't even have to just take TeraWatt's word for it, as the achievement has been validated by third-party testing.

Why is this a big deal, you may ask?

Well, the lithium-ion battery pack on the Tesla Model 3 is widely regarded as one of the best available in terms of energy density – i.e. the amount of energy it can store for its given weight. It has an energy density of 247Wh/kg which endows the standard Model 3 with a range of 240 miles or 310 miles for the long-range version, the battery pack for which weighs a hefty 480kg.

With the Tera3.0 solid-state battery the energy density is almost double. So for the same weight you will go twice as far, or you halve the weight, go the same distance, and get a far more dynamically able vehicle.

But unfortunately there's a catch – and it's a big one. Whilst TeraWatt is a subsidiary of SF Motors – another silicon valley-based EV and component manufacturer – it currently has no plans to produce the Tera3.0 solid-state battery in sizes applicable to EV use. It may well find its way into your smartphone or your battery-powered lawn mower, but even this won't be for a while. Early adopters who have got first dibs on it won't get it until 2021 and the wider market won't see it until a year later.

That's not to say that there isn't light at the end of the tunnel when it comes to solid-state batteries, which some consider the holy grail for taking EVs to the next level. TeraWatt itself is already working on its so-called Tera4.0 solid-state battery which is designed for EV applications. The plan is to achieve even higher energy density, with a target of more than 500Wh/kg. There's no timeline for release of the Tera4.0, but given the 3.0 won't be widely available until 2022, it'll be some time away.

While TeraWatt currently has the limelight thanks to its recent achievement, there are many other companies also working on solid-state battery technology. Imec, a Belgian nanotechnology company, is working on batteries that can be used in EV applications and has already achieved 400Wh/kg. However it reckons it can do better, and by 2024 thinks that 1000Wh/kg will be possible with ultra-rapid charging speeds of less than 30 minutes.

If this technology can be perfected and – crucially – made for a price that doesn't put EV adoption back rather than advancing it, solid-state batteries really will be a game changer for the industry. With potentially double the range for the same size and super fast charging, a new generation of EVs will almost certainly take us forward deep into the century.