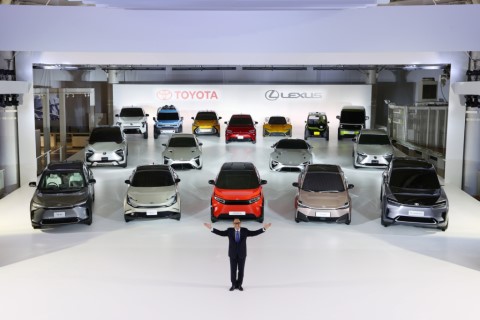 Toyota has set forward its plan to be a leader in EVs with an announcement by boss Akio Toyoda promising 30 battery electric cars by 2030. On top of this, Lexus will be EV only in major markets by 2030, and Toyota will be carbon neutral by 2035, setting the huge brand on its way to EV leadership.

It’s a bit of a turnaround for a brand that has continuously resisted embracing EVs in favour of hybrids for a long time. However, Akio Toyoda’s announcement puts the world’s second biggest automaker up there with the most ambitious in terms of going green.

“We need to reduce CO2 emissions as much as possible, as soon as possible,” said Toyoda. He split the company’s forthcoming electrified vehicles into two categories – ‘carbon-reducing vehicles’ and ‘carbon neutral vehicles’. “If the energy that powers vehicles is not clean, the use of an electrified vehicle, no matter what type it might be, would not result in zero CO2 emissions,” he explained of carbon-reducing vehicles.

“The other category is that of “’carbon neutral vehicles’. Vehicles in this category run on clean energy an achieve zero CO2 emissions in the whole process of their use. We at Toyota will do our utmost to realise such vehicles,” he added.

Lexus to be EV only

By 2030, Lexus will be an EV only brand in Europe, North America and China. Akio Toyoda reckons that battery electric cars suit the brand’s luxury nature with the linear acceleration and deceleration being particularly refined. The first new EV from Lexus will be the RZ – an electric crossover which is due in 2022 and will use the eTNGA platform which underpins the Toyota bZ4X.

Further models will include a larger SUV and a ‘new sports battery EV’ which will offer “acceleration in the low two-second range” and be able to travel for well over 400 miles on a charge. Excitingly, this could use solid state batteries – something Toyota has been working on through its Battery Research Division, established in 2008.

Toyota is aiming to be a zero emissions brand in Western Europe by 2035, having already achieved 3.5 million EV sales by 2030. In terms of manufacturing, Toyota is going for carbon neutrality by 2035 globally by making improvements in where it draws energy from and refining its production processes.

Following the launch of the bZ4X, Toyota will expand the bZ (beyond zero) range with a compact SUV, a small ‘urban’ SUV designed specifically for Japan and Europe which majors on efficiency, a mid-sized saloon and a large SUV which would have three rows of seats.

The bZ series, Akio said, would offer: “a full line-up of reasonably priced mass-production models… to meet the needs of all kinds of customers. By doing so, we hope to deliver to customers around the world the unique and beautiful styling as well as fun-to-drive aspects of battery EVs, and the experience of a life with battery EVs.”

Toyota will redevelop some of its iconic vehicles such as the Hilux, and we may even get a new MR2 in due course. As well as passenger vehicles, Toyota’s e-palette will take on commercial duties and join a range of ‘mobility solutions’ which will offer electric mobility to a wider range of people.

Toyota will continue to develop fuel cell electric vehicles such as the Mirai, however, in the latest announcement the development of buses and trucks was specifically mentioned with regards FCEVs.

Toyota’s announcement is fantastic news which has seen the brand jump from lagging behind direct competitors such as VW, to having plans that are at least as ambitious. What strikes us is the pragmatism in Toyota’s plans, with nothing seeming unachievable. We’re already looking forward to trying the bZ4X and gauging what Toyota’s first bespoke EV can do, so it’s good to know there will be more electric Toyotas coming in quick succession afterwards.