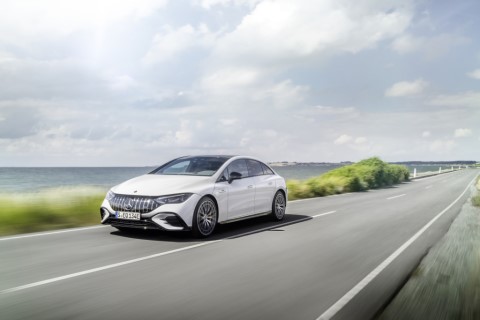 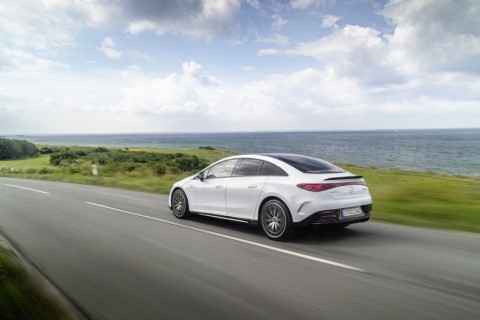 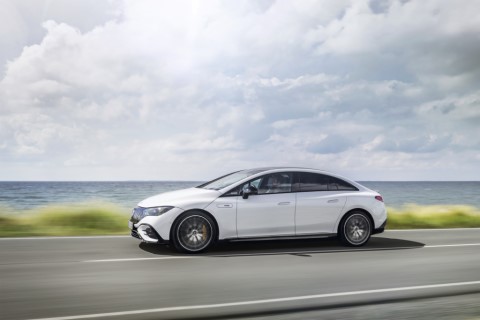 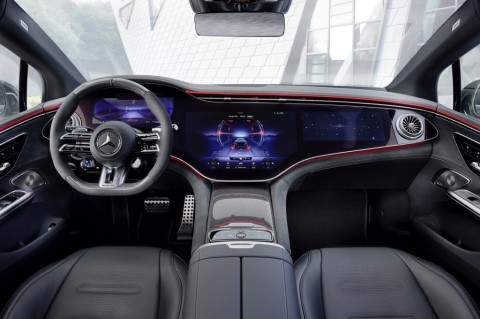 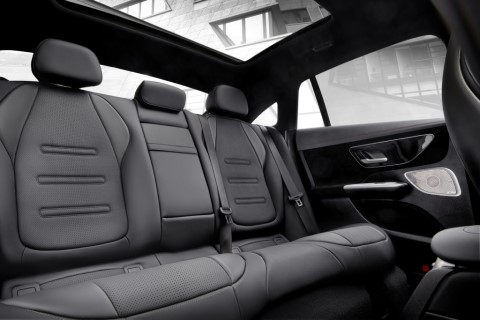 Mercedes has announced two new AMG models in the 2022 EQE range. The EQE 43 and 53 both come with prodigious power, however, the former won’t be coming to the UK which leaves us with the tantalising proposition of the 677bhp version – making it one of the more powerful four-door EVs available.

Mercedes’ electric equivalent to the E Class, the EQE, is set to go head-to-head with the BMW i4. A plush, technologically advanced and attractive EV, it’s not lacking in power with 288bhp and 391lb-ft punching it along at a decent pace.

Whilst we’re still waiting for the official bumpf about the regular Mercedes-Benz EQE, Mercedes-AMG has already gone ahead and announced its versions of the executive saloon. Two versions will be available, though the 469bhp ‘43’ badged version isn’t coming to the UK. Instead, we get the full fat, 677bhp EQE 53 4Matic+ version.

Motors on both axles should hardly come as a surprise given the EQE AMG 53’s 4Matic+’ credentials. Power sits at a maximum of 677bhp in ‘Race start’ mode, which represents 110 per cent of the maximum constantly available power which totals 617bhp. Boosted torque is 738lb-ft whilst maximum constant torque is a shade below at 701lb-ft.

This level of power puts the EQE in the same circles as the Porsche Taycan Turbo, Audi e-tron RS GT, BMW i4 M50. Prestigious company, in other words.

Performance-wise, the EQE 53 will hit 62mph in 3.3 seconds with the AMG Dynamic Plus package (3.5 seconds without) and go on to hit 149mph (137mph). Rear axle steering is standard on AMG EQE models, helping keep the 2.5 tonne car in check alongside AMG Ride Control+ suspension with adaptive damping and that aforementioned 4Matic four-wheel drive system. Where regenerative braking isn’t sufficient, 415mm six pot front and 378mm one pot rear brakes kick in.

Mercedes-AMG has given the EQE a 90.6kWh battery from its new generation of cells, enabling a range of between 275 and 322 miles according to preliminary WLTP tests. A new generation of thermal management and energy recuperation via regenerative braking of up to 260kW helps eke out more range from the available power. It can be charged at a maximum of 170kW DC, adding over 110 miles in 15 minutes, or via the standard 11kW on-board charger. A 22kW charger is optional.

As you’d expect, AMG has given the EQE a once-over. There’s an AMG-specific black panel grille with chrome vertical struts and AMG lettering. The Digital Light headlamps project the AMG logo when opening or closing the EQE, whilst high-gloss black and chrome trim around the car sets it apart. This can be found on the front splitter and air intakes, sill panels and rear apron – which also acts as an aero-optimised diffuser. Finally, AMG wheels finish off the package.

The standard Mercedes-Benz EQE comes with the latest generation of MBUX infotainment, including the optional ‘Hyper screen’ which spans the entire width of the dashboard. This replaces most of the buttons with touch controls for both the driver and passenger. Space for people and luggage (430 litres) remains the same as the standard car.

Setting the AMG apart are a smattering of AMG logos throughout the cabin, such as in the AMG sports seats which are made of ARTICO man-made leather with MICROCUT microfibre and red topstitching. These materials are used liberally in other areas of the cabin such as the door and instrument panels. An AMG, multifunction steering wheel and sports pedals enhance the sporty look.

As with the standard car, the Hyper screen is an optional extra, though the latest MBUX infotainment is standard. For those who care about such things, an AMG Sound Experience comes as part of the AMG Dynamic Plus package.

The cost of the Mercedes-AMG 53 4Matic+ hasn’t been revealed just yet, but we’re expecting both prices and the sales launch to take place later in the spring this year.