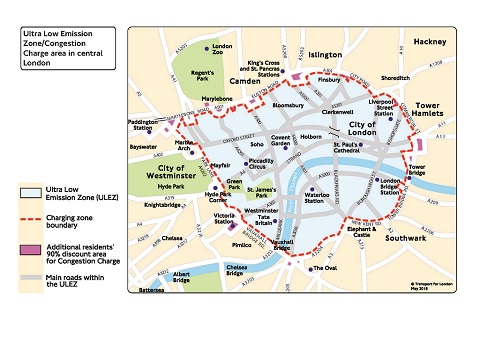 The launch of the Ultra Low Emission Zone (ULEZ) in London today is a welcome step towards cleaning up urban air quality. Its policy is complemented by action on other vehicles such as buses and trucks, and avoids outright bans by enforcing a daily charge (£12.50) on vehicles that don’t meet the emissions standard.

A rule of thumb is that it affects diesels made before 2015 and petrol cars before 2006, and the ULEZ covers all vehicles driven within the central London area, while the Low Emission Zone (LEZ) covers larger vans, minibuses, lorries, buses and coaches, as well as other specialist vehicles driven within most of Greater London. It will initially cover the existing congestion charge zone in central London (which you might also need to pay), but will operate 24 hours a day, seven days a week. From 25 October 2021, it will expand to an area bounded by the north and south circular roads. You can check to see if your vehicle complies with the ULEZ standards on the Transport for London website.

However, according to Allow Independent Road-testing (AlR), the world’s only fully independent, standardised on-road emissions rating system, using Euro emissions standards are a poor proxy for urban emissions, as many vehicles emit way in excess of accepted limits.

Under the ULEZ scheme, penalty-free access to the centre of London will only be granted to petrol cars with a minimum Euro 4 standard while diesels must comply with the Euro 6 standard. These apparently different limits are in fact logical as they both equate to 80 mg/km of NOx. But tests conducted for AIR, and rated in the AIR Index, show that many Euro 6 diesels will still be producing many times the officially published NOx limit, with free access to ULEZ.

That said, there is already illegal levels of NOx in the city’s air and following a high court ruling earlier this year that the government’s current policy on air pollution was unlawful, and thus ordered changes, the ultra-low emission zone adheres to one of the toughest emission standards adopted by any city in the world, and will undoubtedly improve air quality for millions of Londoners.