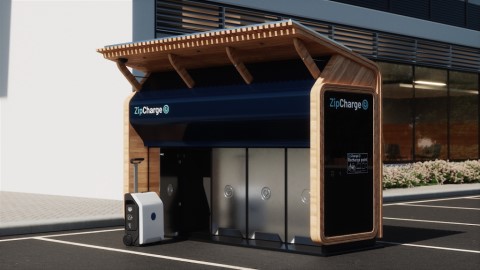 Since launching its portable charger late last year, ZipCharge has been busy working on ways in which more people can use its technology. The latest innovation is the GoHub, which stores up to ten portable chargers and can be used to charge EVs away from traditional, static charge points.

The idea is to enable more people to take advantage of the benefits of ZipCharge’s ‘Go’ portable chargers through shared public use.

So-called GoHubs house five or ten units, each of which is the size of a regular hard-shell suitcase and can dispense up to 4kWh of top-up energy, good for between 12 and 20 miles depending on the car. The aim is for them to be installed in public or commercial car parks, in communities or other areas where traditional charge points are a less attractive solution, allowing users to bring the charge to wherever their car is located instead of queueing for a hard-wired charge point to become available.

The hubs themselves are designed to use around 100kWh of second-life batteries, charged by built-in solar and clean energy from the grid overnight. This charge is then dispensed to the Go powerbank chargers ready for use by customers, with the charge from the powerbank taking around 30 minutes to discharge into an EV’s battery.

One of the potential issues with ZipCharge’s product and business model is somewhat solved by the Hub idea – that of the cost of having a personal ‘Go’ charger at home. The company is offering them for personal use at around £49 per month on a hardware-as-a-service basis; using the proprietary tech in a hub democratises its availability and, with a planned cost of using a Go powerbank sitting at £1 per 4kWh, makes it a cheap, easy solution for a small top-up.

ZipCharge reckons that its technology has the potential to challenge more traditional charging setups within the next decade. According to Co-Founder Jonathan Carrier: “We predict our portable powerbanks will outsell fixed home chargers by 2030, in the same way mobile phones overtook landlines. That’s because the Go can be used for more than EV charging, it’s a portable energy storage device for personal energy management.”

Whilst we would argue that traditional, fixed charging is extremely unlikely to be usurped in nations that are already establishing robust EV infrastructure, we can imagine a scenario where less developed nations use portable charging to a larger extent. In addition, the usefulness of low-speed, top-up charging whereby people simply want to replace the energy their car used getting to a local destination, is going to become part of future charging habits.

So far, ZipCharge hasn’t published details of any pilot locations which are due to come online, however, it has grand ambitions of installing 100,000 GoHubs globally by 2030 to support EV charging, local grid resiliency and energy democracy.