The changes made to the 7 Series plug-in hybrid are the most it’s ever applied to a model update says BMW, but does it make it the choice of the line-up? We drove over 600 miles in it to find out

The 7 Series is BMW’s flagship car – a showcase of the brand’s cutting-edge technology and performance, and for 2019 it has received a mid-life refresh. While its looks may not be to everyone’s taste, its limo-like traits remain and in our opinion the plug-in is the best 7 Series on sale – it’s also more efficient and cheaper than its rival Mercedes-Benz S 560e L. While its target market for the car are those who spend as much time in the boardroom as they do on the golf course, it’s still a car you can enjoy taking to the supermarket, school gates and on weekends away as we discovered. 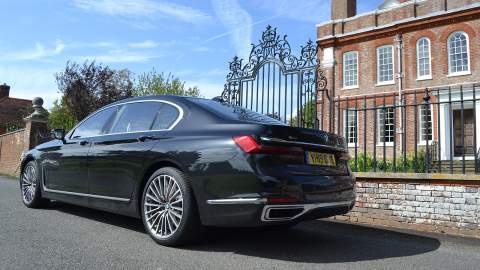 This is the second plug-in version of the 7 Series. The first used a somewhat wheezy for its size four-pot 2.0-litre petrol turbocharged engine, this one has a pokier in-line six-cylinder 3.0 unit good for 286hp. Under the boot floor is a new 113hp electric motor, and drive torque from either or both are transmitted to the rear wheels.  Although there is still a rear-wheel drive bias inherent to BMW, the all-wheel drive system delivers more grip and sure-footed confidence on wet roads. Max system output is 394hp and 443lb-ft of torque, propelling the two tonne exec car from zero to 62 mph in an impressive 5.2 seconds.

In pure EV mode it effortlessly glides along in almost near-silence, which is what a posh limo should do, but for those that do enjoy a six-cylinder roar, it’s there if you squeeze the throttle and wake up the petrol engine.

Despite the plug-in weighing more than the diesel and petrol versions, it handles remarkably well. It proved a great cruiser on the motorways in France and Belgium, so comfortable and smooth, yet handled well on the country roads – even with the air suspension in its softest setting, body control is impressive.

The Lane Keeping Assist feature was by far the best out of any car we’ve tested yet – even on motorways that were being extended with multiple marking s on the road it coped and knew where to position itself. The only thing it didn’t pick up on too well was speed restrictions – but that was while we were abroad. 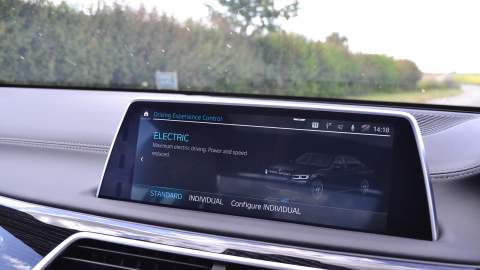 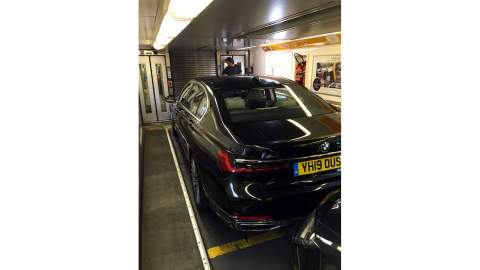 Pure electric range is 32 miles which has improved by almost 30 per cent compared to the previous model, and it can drive up to 68mph in EV mode (12mph faster than before). Despite the extra cylinders, the 745Le emits less CO2 than the old model – 61 g/km to be precise – and that’s due to due to a new lithium-ion battery and more efficient electric motor.

There are three modes, Electric, Hybrid and Sport, which do pretty much what they say on the tin. There’s also a Battery Control button which puts charge back into the battery (from 30 and 100 per cent, your choice) and you can lock it in petrol mode, to save the battery charge for later.  When you select a destination in the sat nav, the 7 Series will work out the best use of energy along the route, so when you’re going through a town for example it'll automatically switch to EV mode, which is pretty cool. Don’t expect the quoted 100mpg+ economy if you don’t run the car on electric power – the best we got was 40 mpg – which is fairly respectable for such a huge, powerful car.

Obviously depending on how far you drive between charges and driving style, we were getting 20-30 miles without using any petrol. Further savings can be made if you enter the London Congestion Charge zone and for company-car users, Benefit-in-Kind rates for the 745e stand at 12 per cent for next year.

You can juice your 7 Series plug-in hybrid via a standard three pin socket (taking around five hours), wall box (two hours) or public charger. It is worth noting BMW charges you for the faster Type 2 connector, which is a bit tight when you consider this is almost a £77k car. 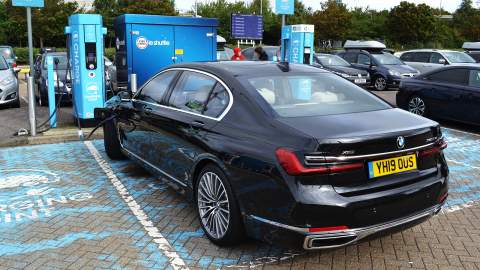 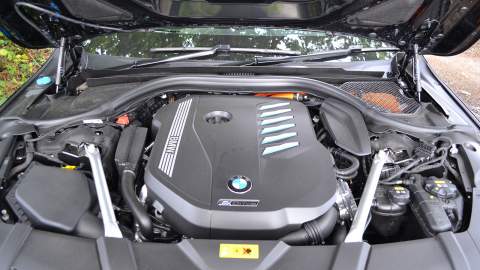 BMW is calling its mid-life updates for the 7 Series its most radical yet, and the biggest of those is that new grille. It’s 40 per cent larger – in fact the whole front end is 50mm taller. It certainly makes more of a statement, and BMW says that the brash new look is to help differentiate it from the rest of the saloon car range but to also appeal to Chinese buyers who make up 40 per cent of all 7 Series sales. So what else is different? The front headlights are slimmer and now feature adaptive LEDs as standard, with laser headlights a £1595 option, there’s also a new front bumper and side skirts and slim LED bar at the rear. The only external items to differentiate the 745e from other models, is its badging and the flap for the recharging socket.

Inside the only noticeable change is BMW’s latest version of its class-leading iDrive infotainment system – with gesture control – and a new screen for the dials.

The battery does take up some of the boot space compared to its conventionally powered siblings, but not by much – you lose just 95 litres – and at 420 litres it’s bigger than the Mercedes S-Class PHEV. There’s also plenty of storage front and rear. 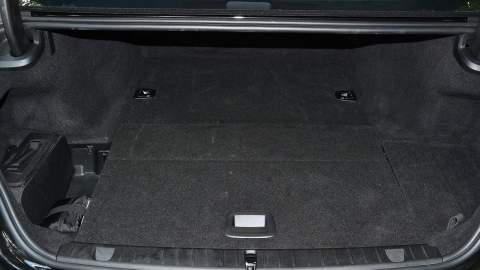 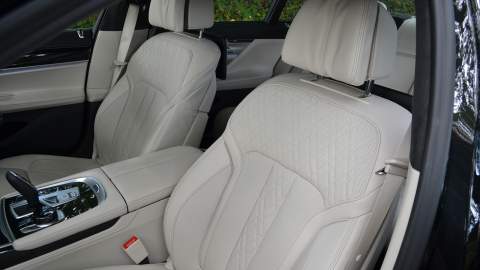 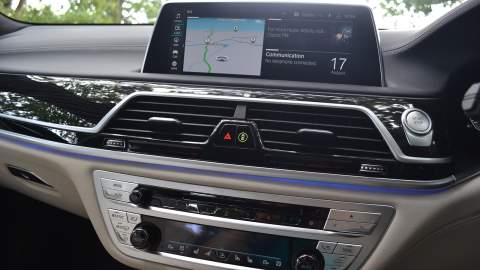 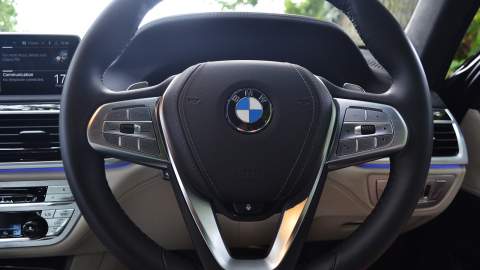 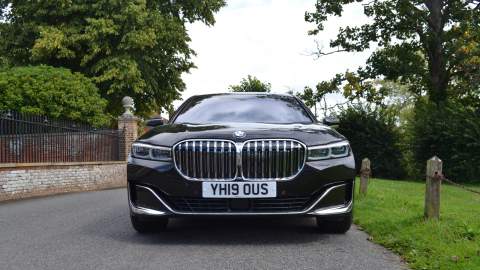 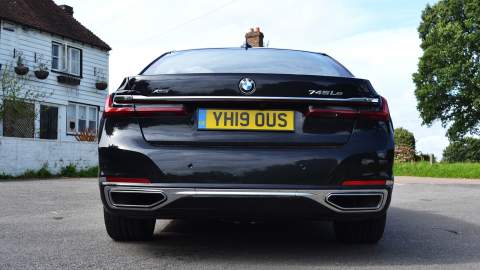 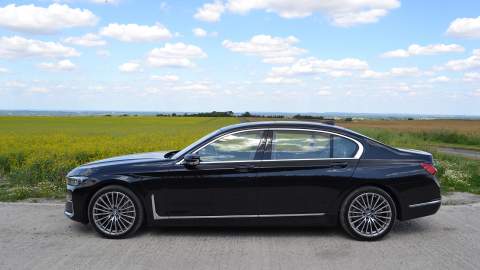 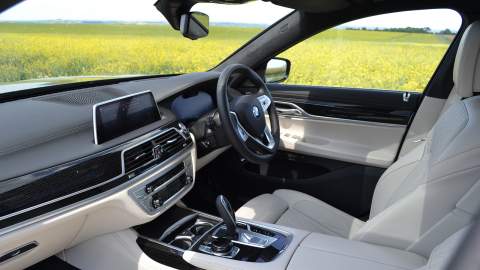 Apparently the brand spent four years honing the marketing for this generation of Seven which includes new technologies such as gesture control and remote control parking, and as well as communicating the array of innovative tech inside it also focused on the comfort side of things: with the 7 Series getting a new tagline ‘Driving Luxury’ rather than BMW’s traditional ‘The Ultimate Driving Machine’ positioning.

To that end, the quality of the interior is excellent with lashings of soft leather  and various other plush materials, and the amount of standard kit is decent too, including soft-close doors, 360-degree parking cameras, wireless phone charging, Harman Kardon sound system, ambient lighting and BMW display key.

The technology, BMW say takes precedence over the driving experience, (although that said this is a car that handles itself quite well as we’ve already covered), and if you spec your car with the Premium Package for £2495 you get pioneering heat-reflecting laminated glass, its own fragrance (think warm woody notes, the aroma of coffee and a hint of leather – BMW’s words not ours!) plus ventilated seats that massage you, which your passengers can also benefit from if you opt for the £9995 Rear Seat Comfort Plus Package. For your money you’ll also get sun blinds for the side and rear windows, a set of trays that fold out, electrically operated fold-out footrests, multimedia screens hanging from both front seatbacks and a tablet in the rear console that is able to control the climate, audio (radio and CD player), navigation and the communication system – which was interesting when our almost three-year-old got his hands on it!

We had the long wheelbase version (with xDrive all-wheel drive), which is 14 cm longer than before and offers extended rear legroom space – a must I guess if you’re someone that gets chauffeured around! 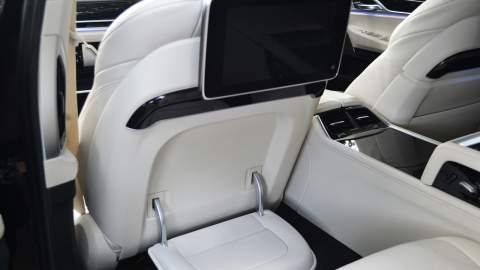 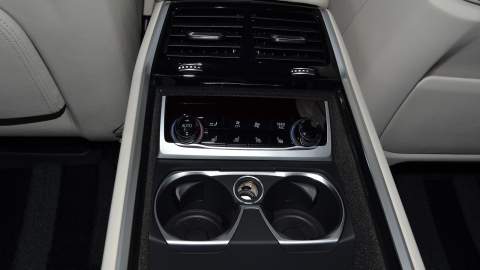 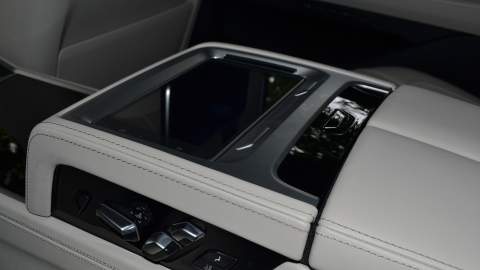 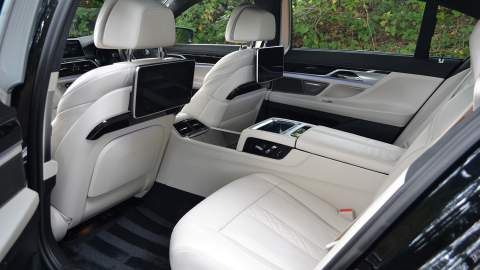 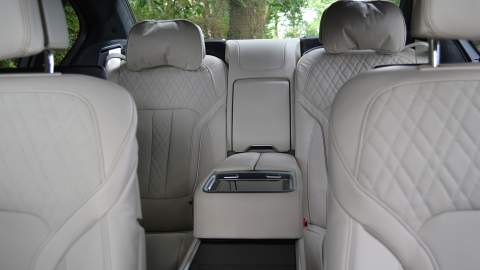 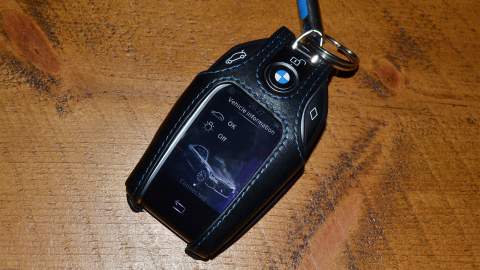 The plug-in hybrid model makes it more suited to chauffeuring duties than its conventional siblings, and it’s so much better than its lacklustre four-cylinder predecessor. If you’re in the market for a big-end limo hybrid car and you want luxury, tech, magic-carpet like ride and effortless performance – then this is one of the best in its class. Saying that, the Mercedes-Benz S 560 e is its only true direct rival that the BMW 745e has right now, and though the Merc has more power and torque, it is more expensive (by around £14k) and has a smaller electric range of 25. Then there’s the Audi A8 which uses ‘mild hybrid technology’ but no pure EV-only range and while more efficient, it’s the same story with the Lexus LS 500h hybrid. For now the BMW 745 Le owns it! 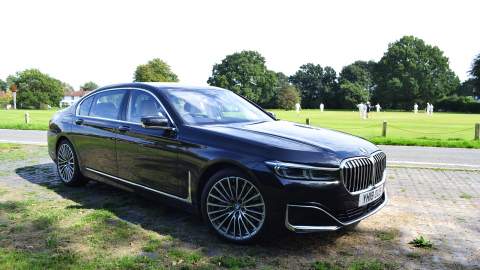