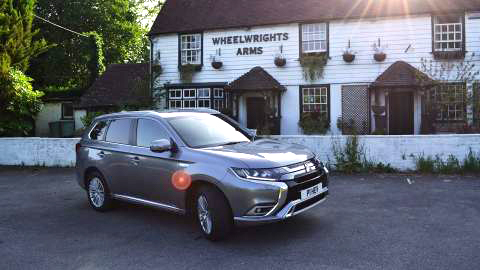 Can you think of any other sub £40k plug-in hybrid SUV? Nope. Me neither, and it’s probably why the Mitsubishi Outlander PHEV is the UK’s most popular plug-in vehicle. Revised in 2019, with an EV range of 28 miles we get to know it over the course of a week.

When the Mitsubishi Outlander PHEV first launched in the UK in 2014 it made a big impact. During the previous year fewer than 1000 plug-in hybrids were sold in Britain but by the end of 2014 Mitsubishi had sold more than 10,000 of its green SUV. And its popularity extended beyond Britain too – by April of this year it achieved a key milestone with 200,000 global sales. Interestingly Mitsubishi has no immediate plans to release an electric-only SUV, instead it is focusing on its plug-in hybrid technology to improve CO2 emissions and air quality in high-traffic areas where the car maker claims half of average weekly mileage is in EV mode.

In fact, Mitsubishi are very keen to campaign the UK’s most popular plug-in hybrid vehicle especially in light of the government completely withdrawing any benefits for PHEVs compared to more polluting vehicles, because of misconceptions about what motivates people to buy them. To that end they have carried out extensive research that showed fuel economy and running costs are the primary reasons for drivers choosing their PHEV and that 90 per cent of owners surveyed charge their vehicles at least two to three times per week.

Mitsubishi Motors in the UK is calling on the government to be more inclusive of gateway technologies and to incentivise private buyers to make the first step away from pure petrol or diesel power by lowering running costs and rolling out more on-street and residential charging for people without driveways. There’s no denying that a PHEV could be an important step to pure electric future, and we’re fully behind them: we spend a week with the most technically advanced SUV ever produced by Mitsubishi. 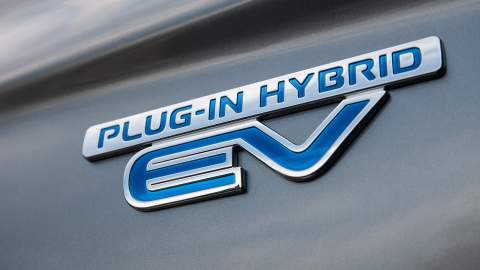 Since its launch five years ago, the Outlander PHEV has continuously evolved, in 2016 it had a facelift, 2017 brought more safety and technical features, while the changes made for the 2019 model focussed on the driving experience – all in response to customer feedback.

Let’s start with the under bonnet trickery. At the heart of it is a new ‘4B12’ 2.4-litre petrol engine, which uses its MIVEC variable-valve timing system to seamlessly switch between Otto and Atkinson combustion cycles depending on the driving situation. The larger capacity means the engine produces more power (135hp vs 121hp) and more torque across a wider rev range (156lb-ft vs 140lb-ft) when operating in the familiar Otto cycle mode, which is ideal for going uphill or rapidly accelerating.

Because the petrol engine can switch to the Atkinson cycle under lighter load conditions – such as motorway cruising, it can be more efficient. Basically, where the inlet valve remains open for longer, it reduces the compression stroke, thereby decreasing its capacity and consequently burning less fuel.

The Mitsubishi Outlander PHEV’s electric powertrain has also received some attention. Improvements include a 10 per cent increase in the generator output and an increase in the rear electric motor output from 82hp to 95hp. The drive battery has also had its output increased by 10 per cent and its overall capacity increased by 15 per cent to 13.8kWh thanks to new battery cells.

So, how does this all translate to the driver? Well, one of the noticeable changes is the increase to the Outlander PHEV’s top speed in Electric Vehicle mode, up from approximately 78mph to 84mph, while 0-62mph is dispatched in 10.5 seconds, half a second faster than before, and 50-62mph is reduced by 0.6 seconds to 3.7 seconds.

To complement the drivetrain enhancements, a number of other changes ensure the Outlander PHEV is more pleasurable to drive. The front and rear shock absorbers have been recalibrated to improve its low-speed ride while body rigidity has increased thanks to changes in the welding process. We did 600 miles in it over a week and it certainly proved to be a very comfortable and relaxing, successfully smoothing over potholes and bumps, but it is a little unsettled thorough the corners and feels less agile than rival SUVs.

Braking power has improved thanks to larger and vented brake discs up front, and the regenerative braking system has six-settings which can be adjusted via the paddles on the steering wheel, with the left one decreasing the level of regeneration.

There is also a new SPORT mode which sharpens the car’s throttle response and adds weight to its steering, as well as a SNOW mode to improve low-grip launching and cornering abilities on slippery surfaces. 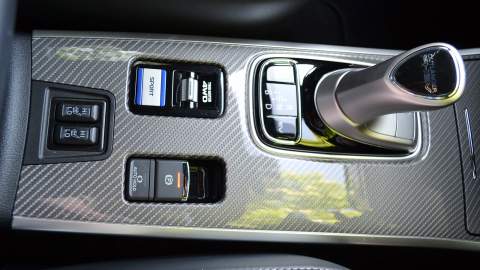 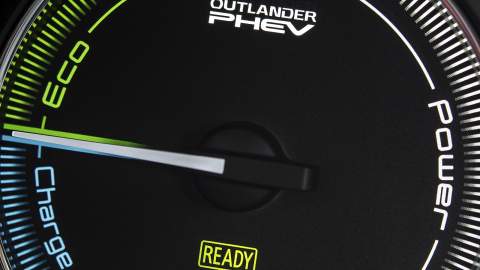 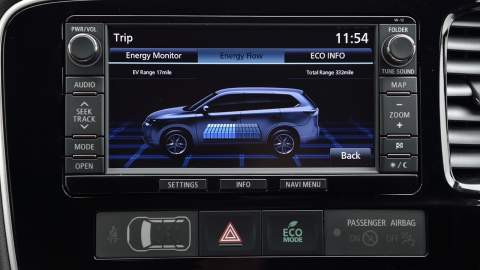 The Outlander PHEV has three Drive Modes, all offering permanent electric 4WD, and it is pretty complex in terms of technology but as the driver you don’t need to do anything – it feels normal to drive and the car decides when the electric motors should contribute to your progress or turn themselves into generators to recharge the battery. If you want to, of course, you can use the console switches to decide what mode you want:

The Outlander PHEV’s pure EV range is 28 miles, and according to Statista the average motorist in the United Kingdom drove up to 10,000 miles per year, which equates to 27 miles per day – so in theory Joe Bloggs could drive the PHEV in electric mode only every day assuming they can charge at home, work or on the go. Because of that petrol engine, there is no range anxiety anyway nor a need for a second vehicle for longer drives, which is presumable why it’s sold so well as a primary family vehicle.

Brand new, prices start at £36,755, which is just over £8.5k more than its petrol sibling but with CO2 emissions of just 46g/km that means a low benefit-in-kind car tax bracket, making it very attractive as a company car buy. You can also now pick up a 2014 model for under ten grand now. It’s not as efficient as you might think once you engage that petrol engine however. Mitsubishi claim an official economy figure of 139mpg, but the best we got trying really hard after a full charge and with a mix of motorway and B roads driving was 43mpg. 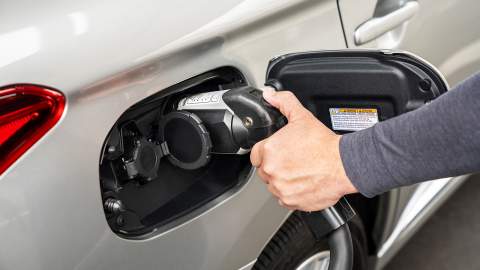 As part of its update for the 2019 model year, the new Mitsubishi Outlander PHEV benefits from a few styling tweaks – namely a new front and rear bumper, grille, fog lamp bezels, LED headlamp system and rear spoiler, together with 18” alloy wheels.

Inside the front seats have been redesigned and together with the revised switchgear, new instrument cluster (providing the driver with more information as to the operation of the various drive systems), trim and black headlining, it certainly makes for a nicer environment. But it still feels outdated and utilitarian. The addition of rear ventilation vents and more convenient USB ports are welcome touches. 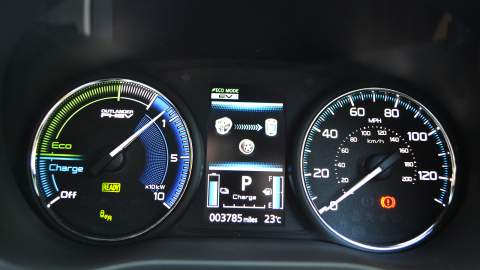 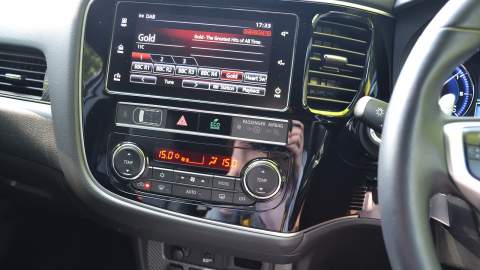 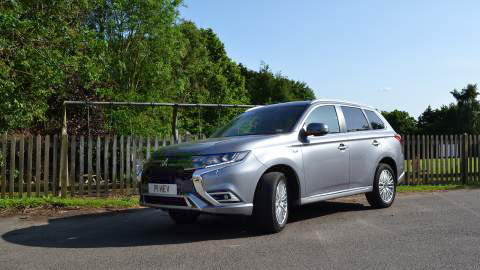 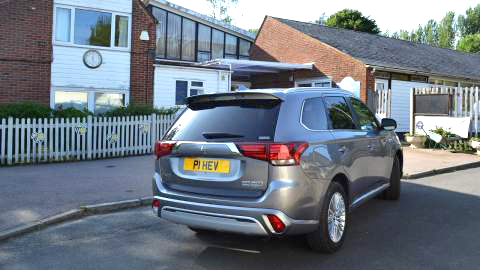 Inside improvements have been made to the sound deadening and on the motorway it certainly felt a lot more refined – and comfortable, thanks to the re-contoured front seats, which offer more lateral support. The Smartphone Link Display Audio infotainment system with 7 inch touchscreen display isn’t the slickest or quickest. It’s not obvious how you navigate the sub-menus and some of the buttons are very small making it awkward to use on the move, plus it’s not the most comprehensive. It doesn’t come with sat nav  for example so drivers have use Apple CarPlay or Android AutoTM to get directions, or if they want to make and receive calls, access text messages and listen to music.

Our only real gripes were with the ergonomics of the car inside. The button for the heated steering wheel and front window heater for example was down by the cigarette lighter, and to find the petrol filler release I had to Google it – and it seems a lot of people have done the same judging by the various links I found.

It offers plenty of space for up to five full-size adults, and because the 300V Lithium ion battery pack is integrated into the floor, the Outlander PHEV retains the practical advantages of a large boot (463 litres to be precise) and fold-flat rear seats, in addition to plenty of storage cubbies. It can even tow up to 1500kg.

The Outlander PHEV is available in five trims levels – Juro, 4, 4hs, 5h and 5hs, and even the most basic of those is well-equipped with heated front seats, dual-zone climate control, reverse camera, and cruise control, automatic headlamps and rain-sensing wipers. 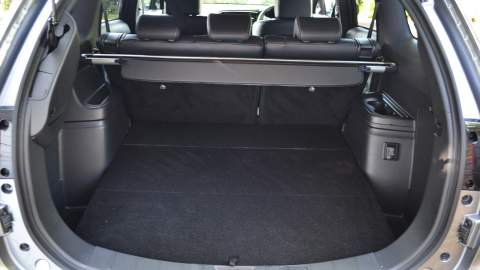 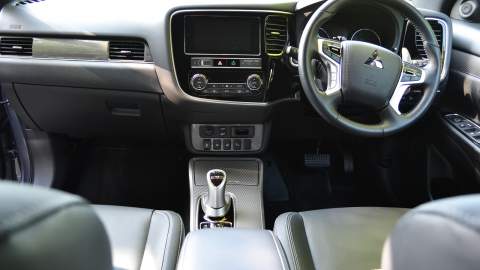 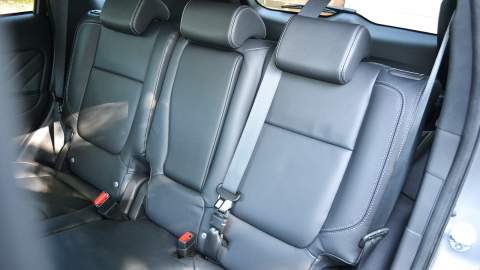 Despite our criticisms, it’s easy to see why the Mitsubishi Outlander PHEV remains the UK’s best-selling plug-in vehicle: It’s an SUV, it gives you massive tax breaks and there’s nothing else on the market for the price tag.

And that’s why it’s hard not to recommend it, especially if you’re a business user with a few kids and able to plug it in on a regular basis. Despite difficult market conditions the Outlander PHEV continues to buck the trend, and until it occupies such a commanding niche, we can only see its success continue. 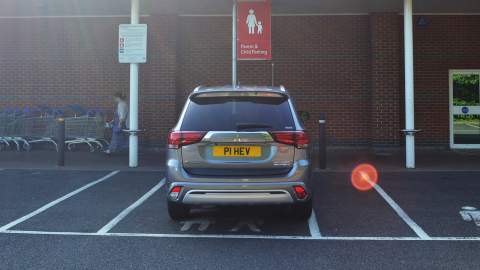