The Panamera Turbo S E-Hybrid has the most powerful drivetrain of any Porsche sold at the moment. In fact, it marks the first time in the brand’s history that a plug-in tops a range. And if you had £84,000 burning a hole in your wallet it might well be the Stuttgart badged car you want, not only because it’s greener than its full fat petrol siblings with CO2 emissions under 75 but it’s around four times more economical, too. So it’s good at saving fuel and it’s good at going fast, what’s there not to like? We find out. 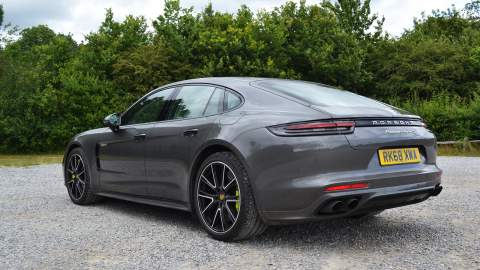 What’s under the bonnet of the E-Hybrid model?

You get the same 550hp 4.0-litre V8 that’s in the regular Panamera Turbo, except you also get a 136hp electric motor.

It’s the same 14kWh lithium-ion drive battery, electric motor and high-voltage power electronics from the latest Cayenne E-Hybrid that we test drove earlier this year. Due to the mechanical layout of the car, the eight-speed twin-clutch gearbox limits the car’s peak torque potential but the figures are still impressive, with a combined output of 680hp and 627lb-ft of torque from 1400rpm. It’s as quick as it sounds – in fact it reaches zero to 62mph in 3.4 seconds, which is the same as a 911 GT3 but this weighs 2.3 tonnes.

The car defaults to E-Power mode and will give you an electric range of 31 miles depending on how and where you drive it and conditions. We were getting around 25 miles. Put your foot down too hard and the V8 interferes so you have to try and drive fairly conservatively if you want to stay all-electric up to the system’s potential 87 mph limit. Engage that V8 and you can reach 192mph – but unless you’re on a long enough stretch of private track or Autobahn that’s kind of irrelevant!

The E-Hybrid also has a Sport Response button, which is a little bit of a gimmick, but fun as it sharpens the calibration of everything even more, for 20 seconds at a time. It’s great for over taking or just having a blast on a straight, open and empty road.

Once you’ve used all of your charge, the E-Hybrid puts itself in Hybrid Auto mode, which gives the engine some downtime when coasting or decelerating. The system is seamless, and it’s easy to let the car take it all in its own stride, switching between the combustion engine and electric motor and bringing the regeneration into play when it can to add a little juice back into the battery. The charge-restoring functionality in the system works very quickly – in about five minutes you can get 10 per cent of capacity restored.

If you start your drive from Hybrid Auto, you can opt to either E-Hold (save your charge for later) or E-Charge (task the motor as a generator whenever it’s not needed for total system power).

If one is being pernickety there is a distinct whine at lower speeds that you wouldn’t get in a Turbo, but seriously that’s a small price to pay. 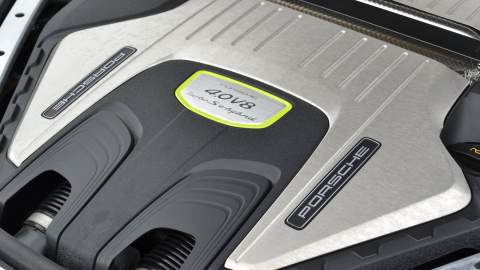 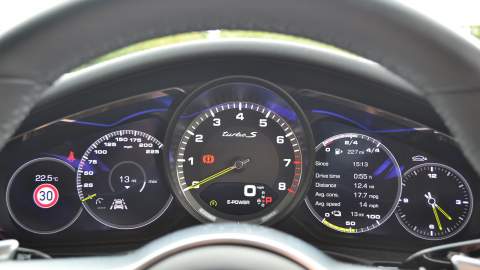 So it’s faster than the regular Turbo but does that make it better?

While it may boast all that low down torque it does have a weight penalty – 315kg to be precise, and that does make itself felt in the corners – it’s a tad less sharp. There’s also more body roll and the ride is choppier over uneven surfaces. Steering is also lighter, and there’s slightly less feedback. What it is good at is cruising – quiet, smooth and comfortable – and let’s be honest you buy a 911 or Cayman if its dynamic handling you’re after.

In Sport and Sport+, responses for the steering, suspension, accelerator, and transmission are all heightened and it is a big improvement – the downside of course it that the engine is then running all the time. In either of these modes it won’t let you drop below a 30-percent charge of the plug-in battery, and if you’ve already used up that capacity they’ll E-Charge up to 30 per cent.

The only other downside is the brakes in that Porsche could have done more with the regenerative side of the driving experience. The difference between regen and the friction pads can really be felt, and it’s a bit grabby. There’s also no way to increase the amount of regenerative braking force – perhaps if there was it would have helped things feel more consistent. That said 16.5-inch front and 16.1-inch rear carbon-ceramic brake discs clamped by acid green ten-piston front and four-piston rear calipers respectfully still do a great job of stopping the car. 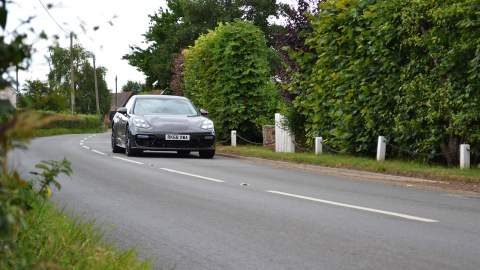 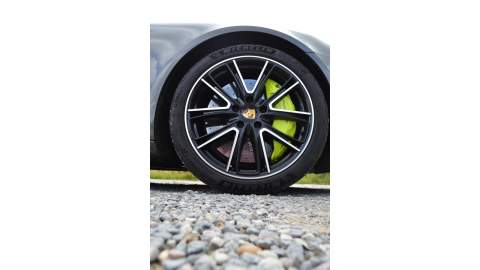 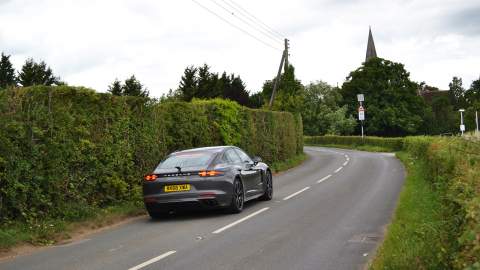 Hang on, it’s also cheaper too?

While it doesn’t qualify for the cheapest rate of VED you do only pay £25 for the first year and then £140 thereafter – the same amount that you’ll pay for all cars (unless it’s fully electric, in which case it’s zero). Don’t forget it your vehicle costs over £40,000, you’re charged an extra £310 for the privilege of being well off.

There is some other good news, because it sneaks under the 75g/km of Co2 and has more than a 20 mile zero emission capable range it qualifies for London’s Congestion Charge 100 per cent cleaner vehicle discount – you just need to pay £10 to register and this will need to be renewed every year. Likewise there is no ULEZ charge. Despite that electric mile range however, the CO2 figure pushes up the BIK tax band to 19 per cent for 2020/21.

You also get a lot as standard on the Turbo S E-Hybrid, which is good when you’re paying this sort of money: Air suspension, ceramic composite brakes, Porsche Dynamic Chassis Control Sport (PDCC Sport), Porsche Torque Vectoring Plus (PVT Plus), a steering rear axle like the 918 Spyder’s, 21-inch alloy wheels from the 911 Turbo, adaptive rear spoiler, 14-speaker Bose audio system and 14-way power-adjustable seats. The interior is typical Porsche – material and finish are excellent and its in-car system easy to use. Both hybrids come with the Porsche's Connect Plus package, which incorporates online navigation, Apple CarPlay phone connectivity, internet access over 4G and remote monitoring and tracking of the car. 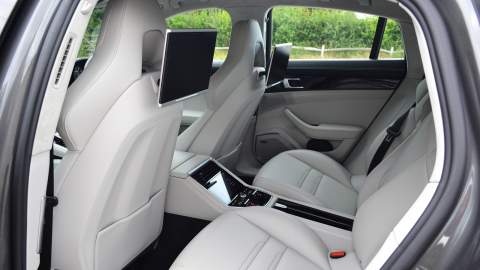 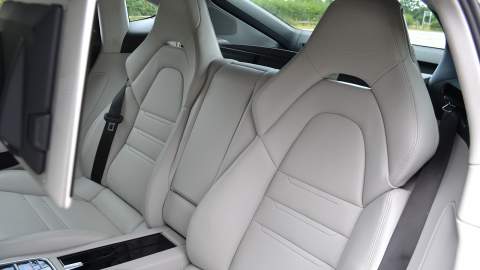 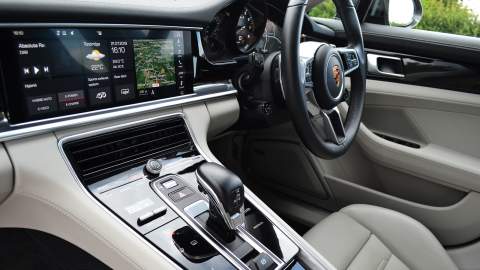 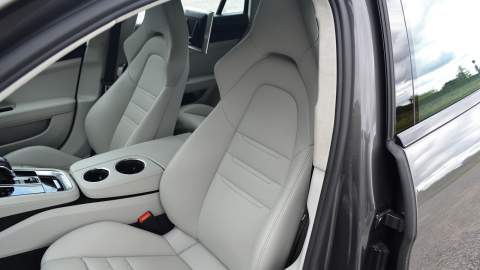 The Panamera hybrid will charge overnight from a standard domestic socket in around six hours. Rather cheekily, Porsche make you pay £536 for a faster 7.2kW on-board charger so that you can charge at the maximum speed of most home wall box chargers. If you do that, you can fully juice it in just less than two and a half hours. 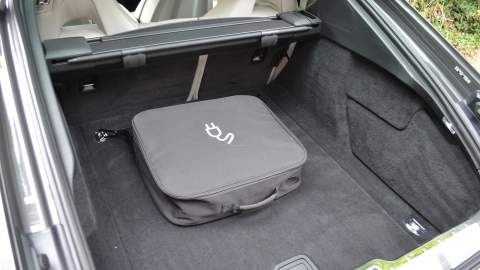 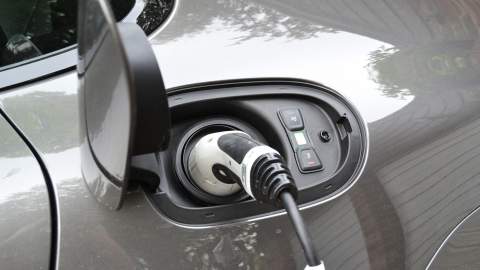 If your daily mileage is less than 31 miles and you regularly make trips into congestion zones, the EV running comes into its own. We also managed to get around 40 mpg which in a heavy powerful car isn’t too shabby.

If you are thinking about buying one, it’s worth noting the second-generation Panamera offers a couple of different variants to choose including the 464hp V6-engined Panamera 4 E-Hybrid (including a 10 Years Edition) and the more powerful V8 variant under the bonnet and both are available in either standard-wheelbase or long-wheelbase 'Executive' form, as well as the more practical Sport Turismo estate body style. For more information to go Porsche’s website.

Save for the fact this is less thirsty than a glut of other fast four-seater saloons, if you’re really sold on the idea of a petrol-electric Porsche and want to make a grandiose statement of intent about your reduced CO2 emissions, then you may just want to pay  £17k over the price of a pure Turbo Sport. You will also be all 0.4 of a second faster to 62mph! 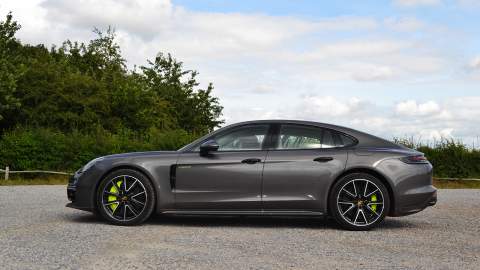 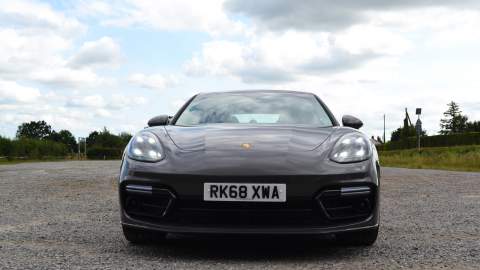 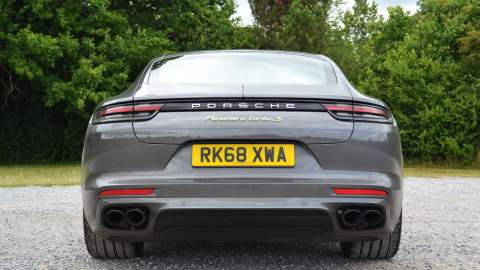 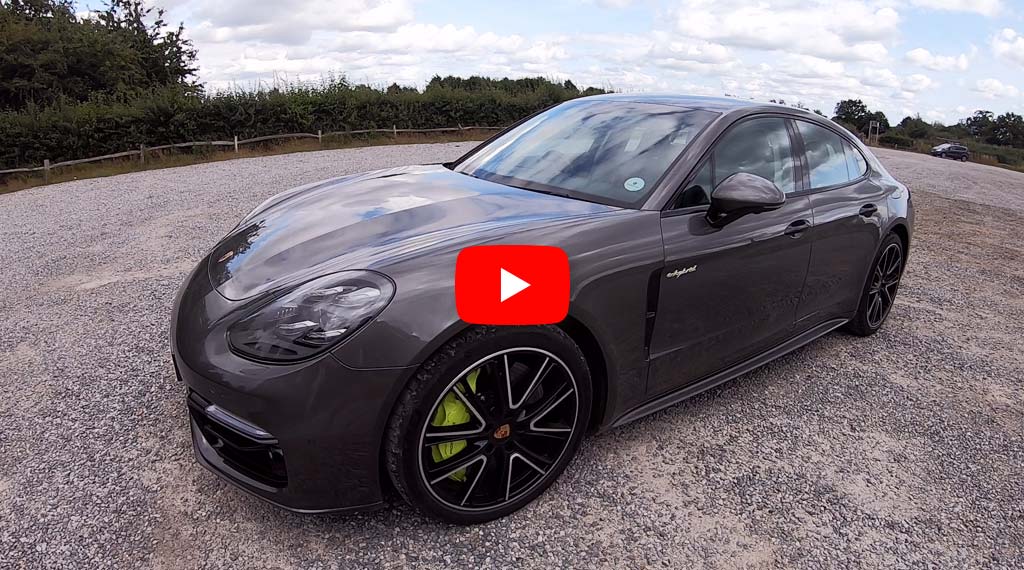