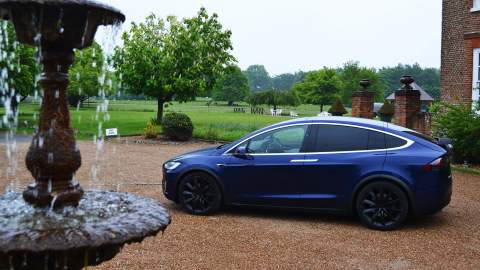 Tesla’s electric SUV doesn’t have the segment to itself anymore but it still offers things other cars don’t. Is it enough though? We spent some time with the Model X Long Range to find out.

The Tesla Model X is the quickest sport utility vehicle ever. It also has all-wheel drive, a range of 315 miles and seating for up to seven adults and all of their gear. It’s fast too, 4.4 seconds to 60mph to be precise and if you get the Performance model (which takes 15 miles off your range) it can do the same sprint in 2.7 seconds. Tesla say it is the SUV uncompromised. And I suppose if you have over 80 grand to splash out on an all-electric luxurious family crossover they could be right. But now there is the Mercedes EQC, Audi e-tron and Jaguar I-Pace all arriving in the wake of Tesla’s genre-defining Model X, and they’re all a lot cheaper.

We spent five days with the Tesla Model X and covered just over 300 miles in it to see whether it commands that £82,200 price tag. 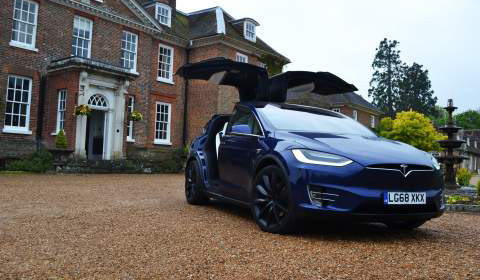 For starters there’s no getting away from the fact how quick this thing is, especially when you factor in it weighs 2.4 tonnes, and that instant, powerful acceleration is very addictive indeed. The downside to that of course is that you end up eating through the range at a quicker-than-expected rate. On the motorway it is quiet, refined and composed, while on the B-roads it holds its own as well – however with the 22 inch wheels shod in low profile tyres it definitely makes for a rough choppy ride over uneven surfaces – we’d recommend sticking with the standard 20s.

Tesla has introduced adaptive damping to its air suspension system in an effort to improve ride comfort, its software detecting bumps in the road ahead and automatically adjusting to driver inputs on the move, and it has to be said the difference is notable having driven one of the early models.

With a low centre of gravity (the batteries are positioned in the floor of the car) there’s not much body roll despite being such a tall heavy SUV, there’s plenty of grip and the steering is well-weighted but it’s not as exciting to drive as say the Porsche Cayenne e-hybrid, though of course the trade-off is then having a petrol engine.

Those aforementioned improvements – made earlier this year – are largely thanks to new drivetrain technology, with a permanent magnet synchronous reluctance motor, first developed for Model 3, driving the front wheels and an induction motor powering the rears to help maximise range and performance.

The regenerative braking can be set to different levels – and at its strongest you can almost drive the car without using the brake pedal, only necessitating the left pedal when you’re coming to a complete halt. You soon get used to it – unlike the Nissan LEAF’s e-pedal for example. The steering is direct, though it lacks feel – that said it does improve in Sport mode, but for everyday driving you’re best off leaving it in Normal or Comfort mode. 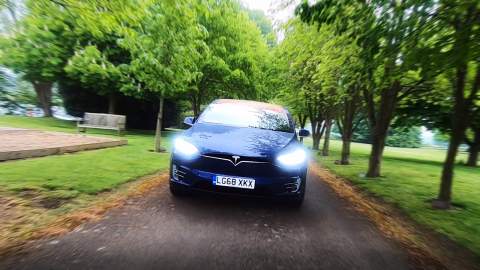 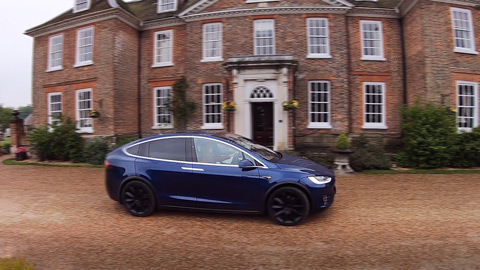 The Tesla Supercharger network is the UK’s fastest, with Supercharger speeds of 120kW available. This is more than twice as fast as currently available CHAdeMO or CCS rapid and offers a charge rate of around 170 miles of range in 30-40 minutes.

Up until January 2017 drivers of Tesla models could use its Supercharger and Destination networks free of charge. Each vehicle bought after this point has 400kWh in Supercharging credits a year, enough for around 1000 miles annually and destination chargers (typically 22kW – are intended to provide top up over the course of several hours,) are free to use by all Tesla drivers who are customers of the destinations where points are located (parking charges may apply though). To use the high power Superchargers will cost 27p per kWh.

Of course, as with any EV, if you can, it’s cheaper to charge at home (using a renewable energy tariff if possible), and at off-peak times. And if you want to charge at home, times aren’t bad – with a 48A wall connector you will get up to 44 miles of range per hour. We simply topped ours up every night using the 3-pin domestic socket and it was more than ample.

So you’ll pay much less for electricity than you would for petrol or diesel, as from next year you’ll pay just 2 per cent benefit-in-kind tax if you’re a company car driver and you'd also avoid paying the Congestion charge. Furthermore, a study by automotive data experts Cap HPI revealed the average servicing and maintenance costs for electric cars are 23 per cent less than petrol vehicles over a three-year/60,000-mile period. But. And here’s a big but. It still costs over £80k. 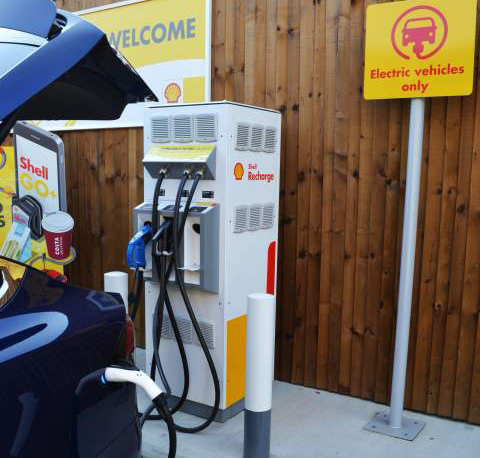 There’s no getting away from the fact that the falcon wing doors are the most prominent feature of the Tesla X. Some people may brand them innovative – and to some degree they would be right – they require less space than the sliding door of a minivan (a bonus in a multi-storey car park) and they’re hugely practical with kids, while others are sure to call them gimmicky. And they would also be right for it has a party trick whereby it plays rhythmic music with LED lights and the wing mirrors and doors go in and out as if dancing – I wouldn’t recommend doing it in public. We met up with a few families for 40th birthday celebrations and did it in the pub car park for the kids and instantly regretted it!

Other than that the Model X looks like a Model S on steroids. Our Long Range test car was in Deep Blue Metallic (one of only five colours available), with 22 inch Onyx Black wheels (a £5400 option), all black premium interior and six seats (a £5900 option). It comes standard with five seats and if you want seven seats then you’ll need to shell out an extra £2900.

With the canopy glass windshield – the biggest of any production vehicle by the way – it feels roomy and airy inside – the downside to this was the useless skinny sun visors, which do nothing to block out the sun when it is low in the sky. Together with the expansive side windows it did at least offer a broad view. 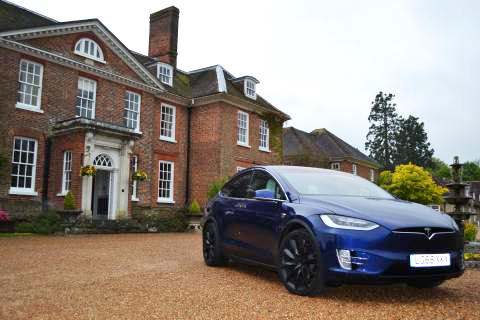 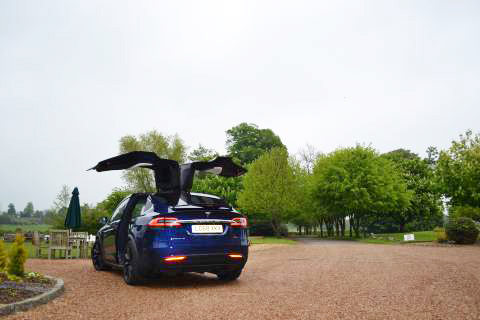 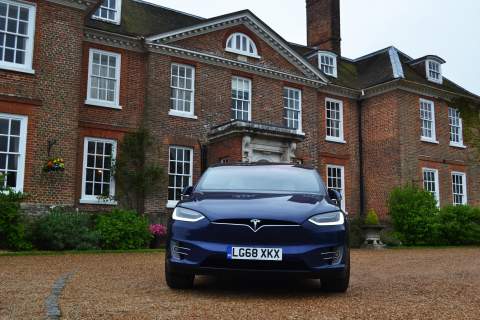 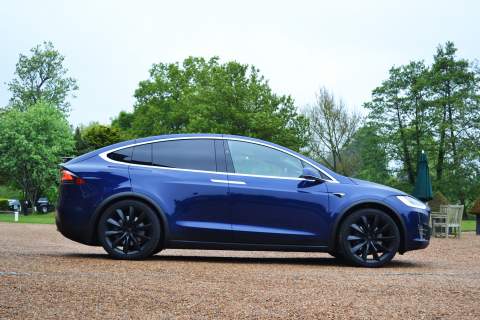 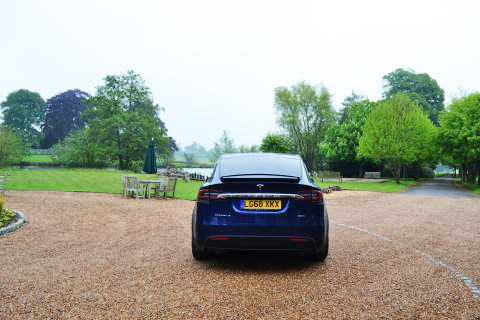 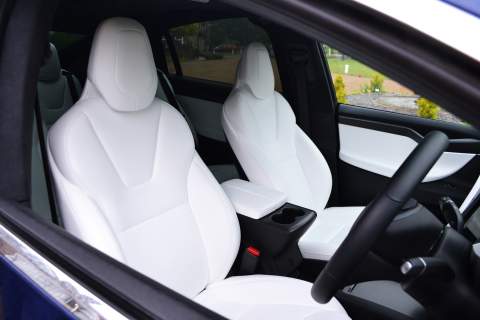 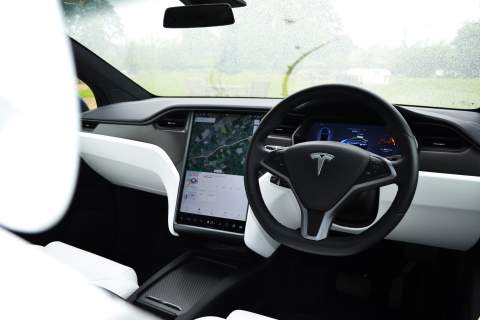 We did a few long drives in the Model X and it was very comfortable. The heating and cooling functions for all three rows are impressive and there is little wind noise at motorway speeds. The centre piece of the clean-looking spartan interior is its high resolution 17 inch touchscreen display, which is intuitive, fast and will feel familiar to anyone who uses a tablet.

We did encounter a few bugs – like the charging cable locking in the port door after just a few seconds of releasing it meaning you almost needed one person to press it and one person to pull it out, and the car randomly slowing down on the motorway while in Autopilot (Tesla’s semi-autonomous driving mode) for no reason – twice. It should certainly be never used without full attention.

We liked the adaptive cruise control, and the screen depicting the proximity of objects near you when parking is handy. It also comes with forward collision warning with automatic emergency braking as standard, in addition to keyless entry and start, heated front seats, a power tailgate navigation, a towing package, and an EV that can tow is quite unique (but bear in mind it will affect range).

The six-seater option is light on utility since the third-row seating (which is best for children only) do not fold and there is no provision for a roof rack. The five- and seven-passenger versions do fold flat.). There's ample space up front and the headroom is respectable in the second row because of the door's skylight windows. Storage options however are sparse for the front passengers, and second-row doors have no storage, but the front boot provides additional luggage space. 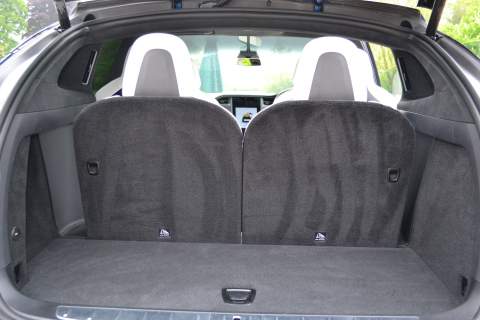 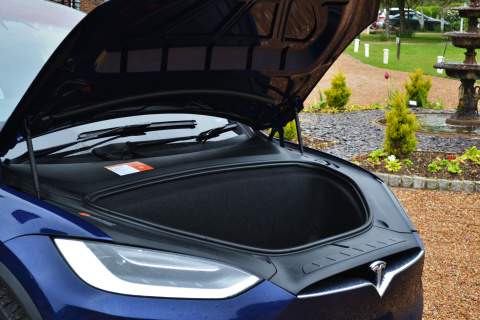 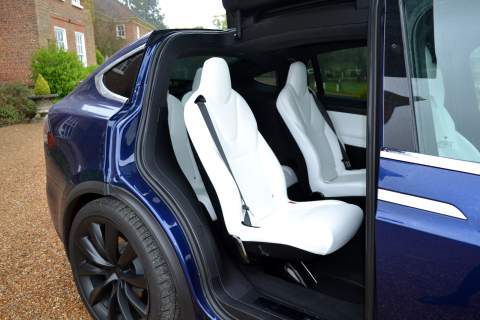 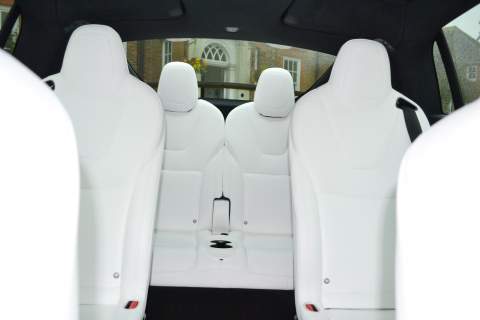 The Tesla Model X is extremely versatile – it has range that most people think is viable is order to make the transition from ICE to EV, it is fast, packed with gadgetry and has plenty of space. The cabin materials and build quality leave us wanting, but if you want a car that’s more about tech features than luxury – then it all adds up to a compelling package and still gives you things that other cars just don’t have (such as doors that open for you, on-demand fart noises and Atari games), but only one that the lucky few can afford. With competitors arguably offering better driving dynamics and build quality, it will be interesting to see if the Model X can survive long term. 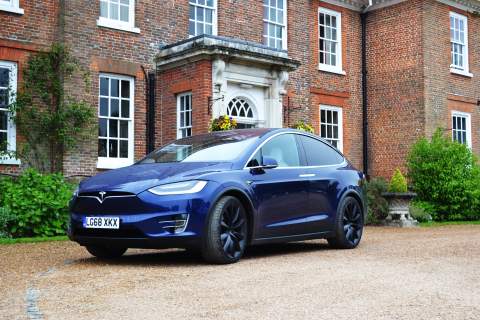 Discover EV would like to thank Chilston Park in Kent for letting us photograph the Tesla Model X outside of their hotel.

Tesla unveils updates for the Model 3, Model S and... 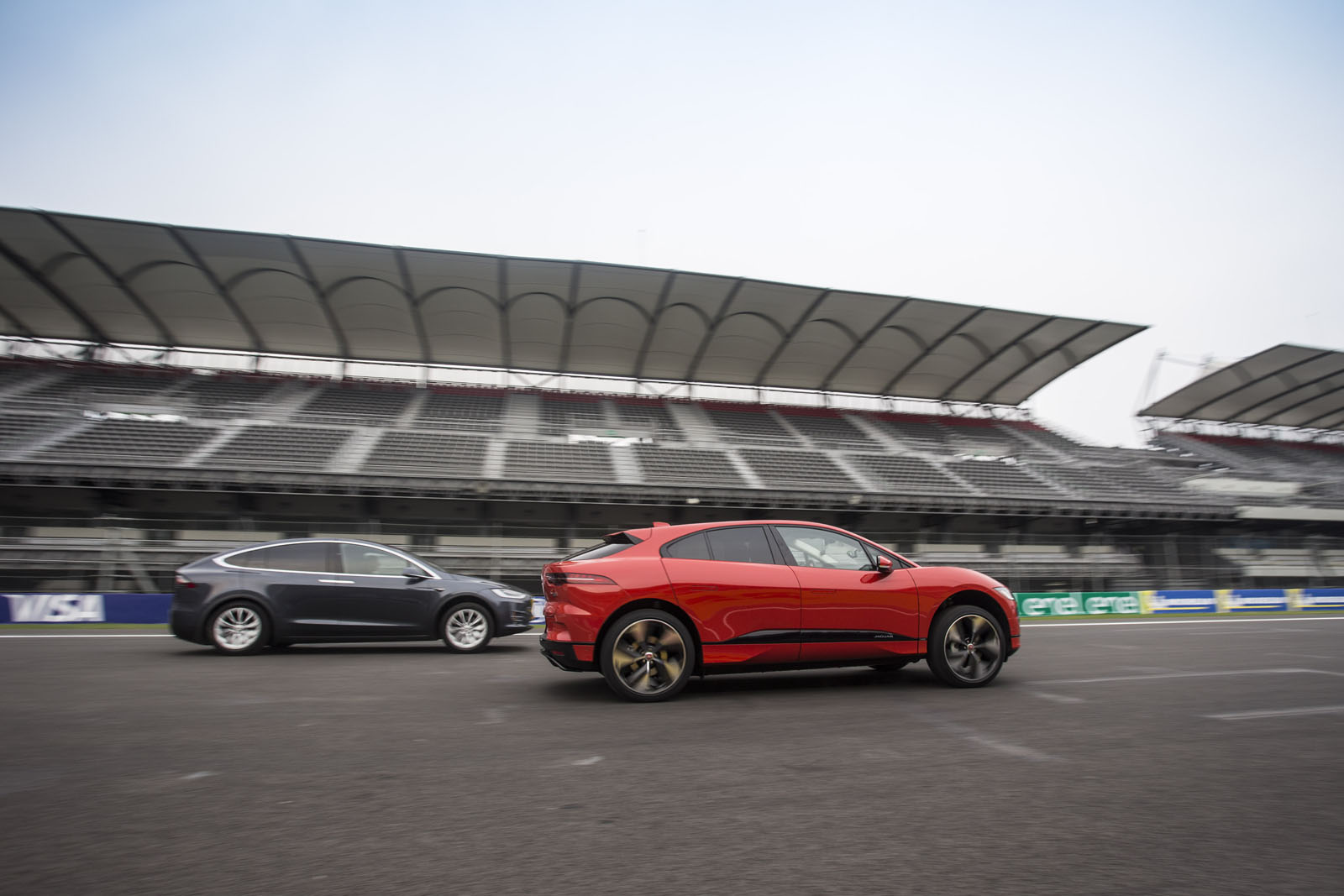 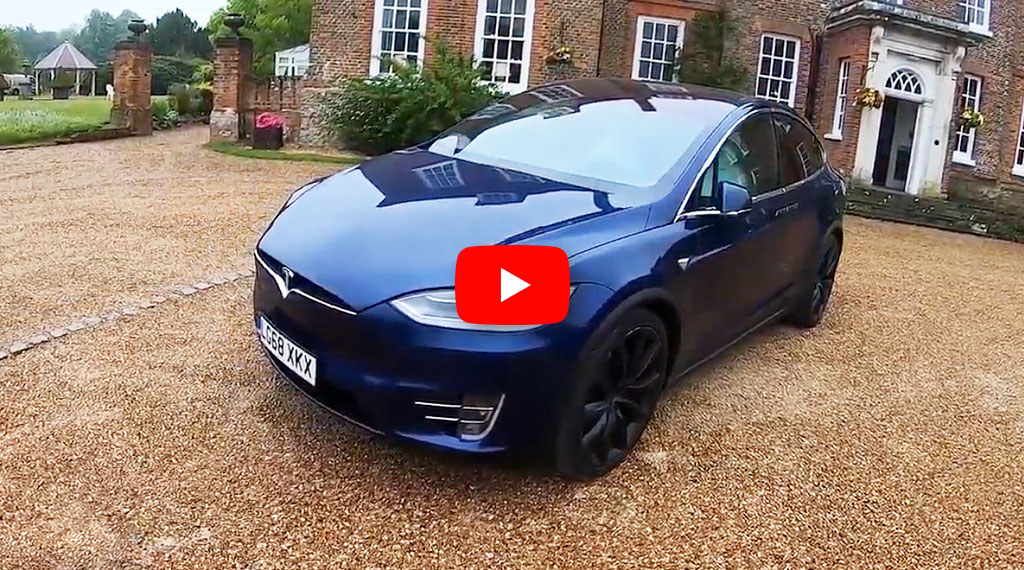