On the road to electrification

Volvo’s XC60 T8 Twin Engine – or plug-in hybrid to you and I – is all part of the Swedish car maker’s vision towards the electrification of its future line-up. It is Volvo’s quickest and cleanest XC60 to date, but is it the best?

Earlier this year Volvo Cars took a significant step towards its electrification goals with the release of upgraded and newly developed electrified powertrain options, which will be available across its entire model range in the future.

The improved T8 Twin Engine features a new battery and brake-by-wire advanced battery charging and is available on all 90 and 60 series cars – accounting for 25 per cent of total production. Volvo expects its new powertrains to gradually become the new standard, moving it closer to its goal that by the middle of the next decade all of its cars will be electrified.

We were given the petrol-electric plug-in hybrid variant of the XC60 to test over a week and this is what we thought of it. 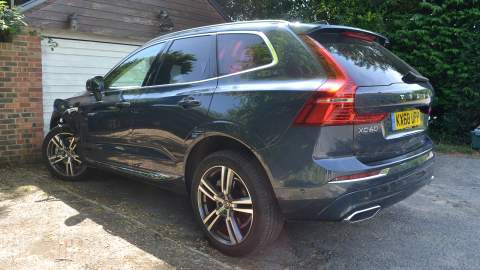 With 390hp and 295lb-ft of torque on Power mode it completes the zero to 60mph sprint in 4.9 seconds – which is impressive given its size and weight. Driving the front wheels is a 303hp 2.0-litre four-cylinder petrol that’s both turbo and supercharged, while the rear wheels are powered by an 87hp electric motor and battery pack. This sort of sophisticated setup is expensive which is why it will cost you over £17k more than its combustion engined counterpart, but you do get an ‘on-paper’ fuel economy of 134.5mpg and CO2 emissions of 49g/km.

With so much horsepower you would expect it to deliver the sort of driving dynamics of the German SUVs, but instead the steering is overly light and the suspension is soft. The setup leans toward comfort and while it’s not bad you do wish that the steering was more communicative and the body didn’t lean quite as much when trying to make use of that power on the country roads. The almost 400hp figure is incongruous to the handling – this is a car that prefers to be a quiet, relaxed cruiser.

One very small bugbear was the gear selector – the T8 is different from the rest of the XC60 range for some reason. Instead of staying in position when you select drive, park or reverse, the T8’s crystal glass one is sprung and always returns to its central position. That means if you’re in Drive and want to go into reverse, you need to push it forward once to select neutral, then again to select reverse. It was really annoying and we’re not quite sure why Volvo did this.

The brakes are very good at hauling down the two-tonne SUV from speed (aided by the motor working in reverse to slow the car down and divert electricity back into the battery to recoup energy). Put the gearbox in 'B' mode and the regenerative braking effect is maximised, so you don't need to use the brake pedal to slow down as much as you'd normally do. A lot of other journalists have complained about the brakes – but we found them to be okay.

Our test car was equipped with the optional £1500 Intellisafe Pro system – which includes Pilot Assist, Volvo's innovative semi-autonomous drive feature. It assists with the steering (up to 80 mph) and takes care of the acceleration and braking required to keep the car within lane markings and at the desired cruising speed or distance from any vehicle in front. It was good although not quite as accurate as Tesla’s Autopilot in that it wasn’t consistent so you couldn’t rely on it all the time. It didn’t seem to always recognise cars parked on the left hand side of roads for example and the Maidstone one-way system seemed to confuse the hell out of it. That said when it knew to change lanes it did it quicker than the Tesla. The speed camera alerts that appeared in the heads-up were very useful. 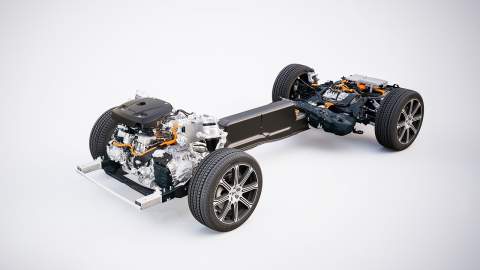 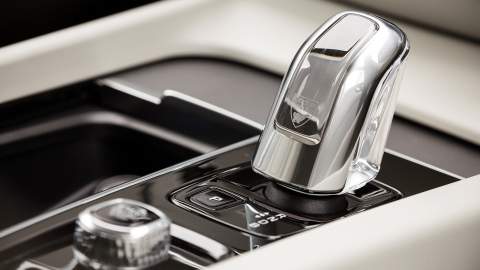 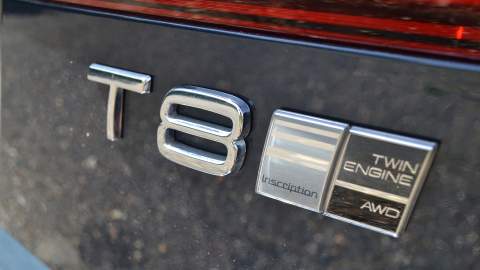 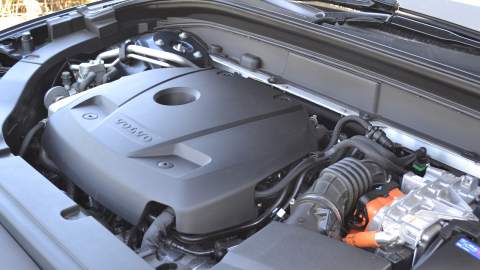 It has five driving modes: AWD, Pure, Hybrid, Power and Off Road. Select Pure and it’ll run on electric power only, giving you a theoretical range of 28 miles, so if you’re able to cover your commute within this distance you’ll use no petrol at all. As stated earlier, Volvo quotes an official fuel economy figure of 134.5 mpg but the best we got was 55mpg, and that’s pretty poor. Few 390bhp cars bring so low a tax obligation however, so if you want a fast company car this is the one to have.

With just an 87hp electric motor in a car that weighs 2115kg, the T8 quickly fires up the petrol engine to aid acceleration and it does this often. You can ‘hold’ the battery’s charge for use later but then you’re using solely petrol power, which makes the T8 quite uneconomical. Hybrid is the best mode, and the switch between EV and petrol power is very smooth.

Its 10.4kWh batteries take between two-and-a-half to three-and-a-half hours to fully charge up from a fast charger, and with a conventional three-pin domestic plug that time rises to seven hours. 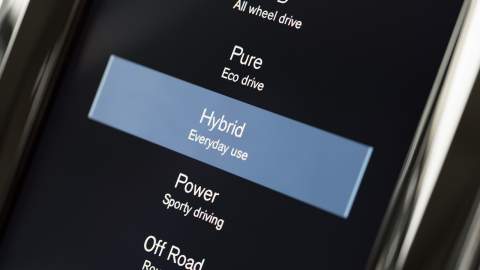 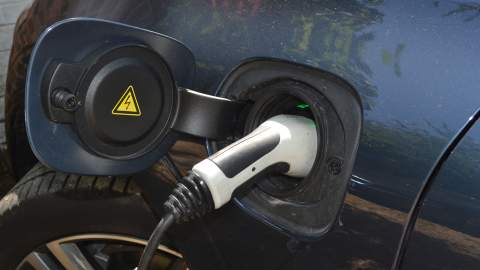 Tastefully designed, with excellent fit and finish and beautiful, high quality materials – it’s a real treat sitting inside the XC60 T8 Twin Engine hybrid and reinforces Volvo’s reputation as a premium manufacturer. You can tell this is Swedish – it just has a sense of style. Outside it’s a similar story – it looks cool from any angle.  Borrowing styling cues from the larger XC90, the XC60 features the same flat-nosed grille, as well as Thor’s hammer-style headlights and equally distinctive rear LED lights. It’s cleaner and simpler looking than its rivals, and all about modernity meeting tradition – classic Scandi chic, what’s there not to like? 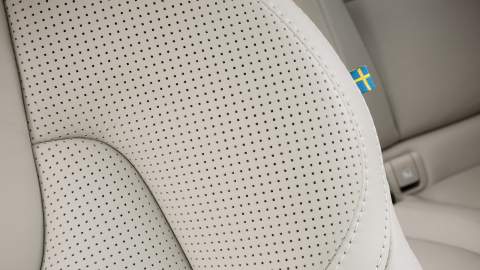 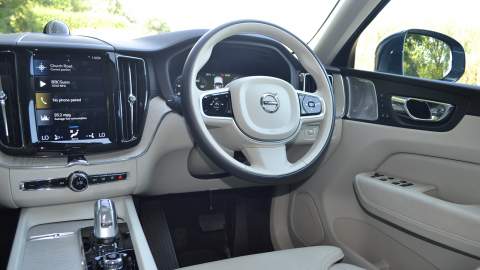 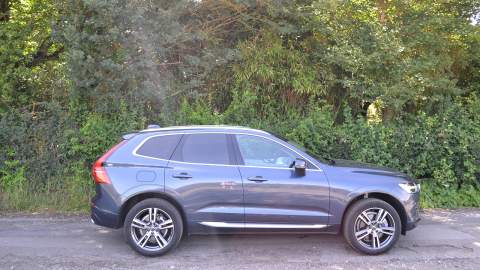 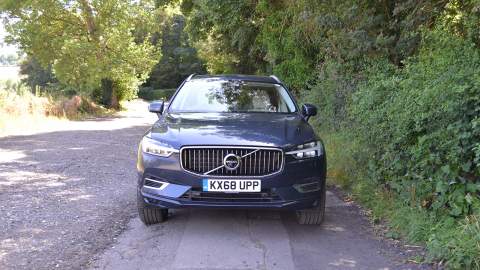 The XC60 is the first of Volvo's mid-sized 60 series models to be built on its Scalable Product Architecture (SPA) platform and it features much of the advanced connectivity, entertainment and safety technology from the larger 90 series cars with even the entry level car boasting a huge spec.

The 9 inch portrait-style touch screen with satellite navigation (including lifetime annual map updates and Real-Time Traffic Information and access to the internet and a range of cloud-based apps) is standard for example, as is Volvo's City Safety system (including automatic emergency braking with pedestrian, cyclist and large animal detection, and the world-first application of Steer Assist – a feature that helps to avoid or limit the severity of collisions at low speeds by swerving to miss an obstacle). It’s nothing you wouldn’t expect from Volvo of course, and on that infotainment system it was really rather good – not quite on a par with Porsche’s but quick to respond, very clear and intuitive. The range of functions you can access is really comprehensive but does mean it’s not always easy to change things on the move.

There are three trim levels for the XC60 hybrid: R-Design (from £55,005), Inscription (from £56,955) and Polestar Engineered (From £64,545). Our test car was the second of those variants, what Volvo call the ‘luxury’ version, and gets you Nappa soft leather upholstery, drift wood inlays, high performance audio system, a different style of 19" wheels, Dynamic chassis and Land Keeping Aid. Yes, it’s expensive but it doesn’t leave you feeling short-changed like a Tesla Model 3 does. We love all the little details – such as the little blue-and-yellow Swedish flags sewn into the edges of the seats.

Head and legroom is generous and while the 505 litre boot is on average 10 per cent smaller than its rivals it proved big enough for our family of five. It proved comfortable and spacious enough for everyone in fact (and we have children ranging for nearly 3 years old to 14), and there was plenty of storage. Although some hybrids aren’t recommended for towing, the XC60 T8 is rated as being able to tow a braked trailer weighing 2000 kg. 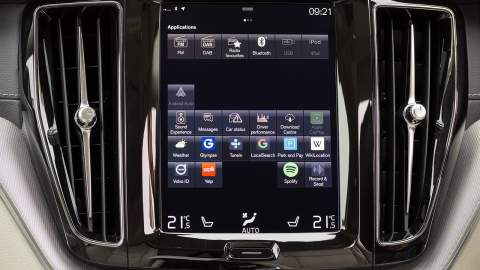 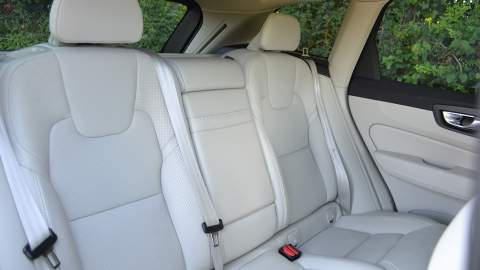 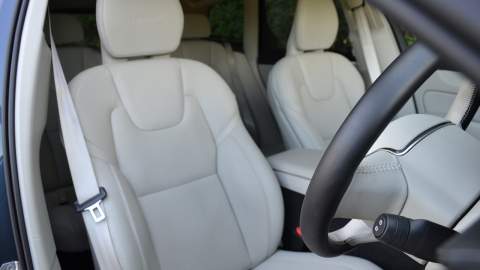 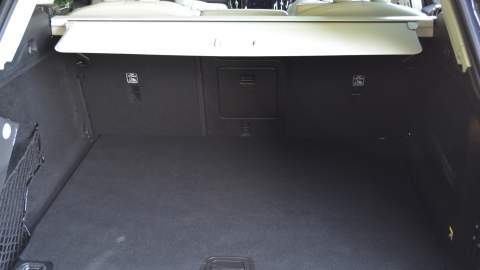 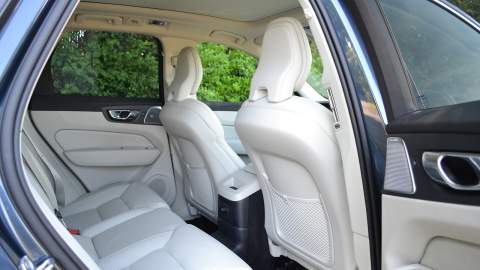 A mid-size crossover that’s handsome, luxurious, refined and fast. For the stay at home mums (or dads) that do less than 25 miles a day the next to nothing running costs would justify the high price tag – likewise for company car drivers who can take advantage of the low Benefit-in-Kind tax. Volvo’s XC60 T8 Twin Engine does prove that hybrid SUVs can be desirable, fast and (sometimes) efficient but it comes at a price and for a lot of people its’ cheaper petrol and diesel siblings make more sense.

Problem is there are very few premium plug-in hybrid models in its class. Other than the cheaper and less prestigious Mitsubishi Outlander PHEV, the only competitors – such as the BMW X3 xDrive30e is not due until December, while the plug-in hybrid version of Mercedes’ GLC is even further down the line. In that respect the XC60 T8 sits in its own class. That is apart from the Porsche Cayenne E-Hybrid that we test drove earlier this year. With an all-electric range of 27 miles, and a 3.0-litre twin-turbo’d V6 to back that up when it runs out, better driving dynamics and tech, it’s just £118 more than our test car with all its options. Saying when you compare the base price of both vehicles the Volvo is £8353 cheaper, which is quite a bit and given it’s well equipped as standard we’d settle for the Swede. 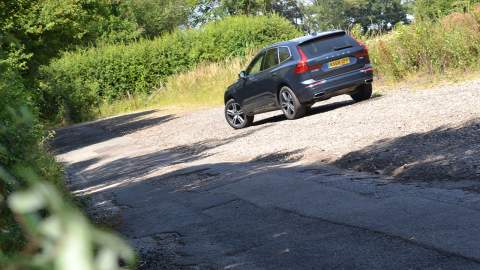 Polestar takes Volvo S60, V60 and XC60 PHEVs to the next level