A fully loaded crossover, the Kia Niro GDi HEV is a good choice if you’re looking for a non-plugin hybrid

Refreshed for 2019, the self-charging Kia Niro GDi HEV is a great family car. In its ‘4’ trim which is the most expensive at £29,270 on the road, it puts to shame some much more expensive European brands, perhaps not with style, performance or handling, but certainly with practicality, room and tech. The ‘4’ spec Niro HEV we had on test had nearly every conceivable option you could think to specify.

The entry model ‘2’ spec starts at £24,590 and the ‘3’ at £26,770. We reckon the ‘3’ is probably the pick of the bunch as it gives you the excellent 10.35 inch centre touch screen, which is probably one of the best in class at this level, front and rear parking sensors, 18 inch alloys and heated seats, only forgoing LED headlights, sunroof, memory and ventilated seats and the JBL sound system of the ‘4’.

Although in terms of safety equipment it’s only the ‘4’ that gets the Blind Spot Detection and Rear-Cross Traffic Alert with the ‘2’and ‘3’ making do with just the Forward Collision-Avoidance Assist. 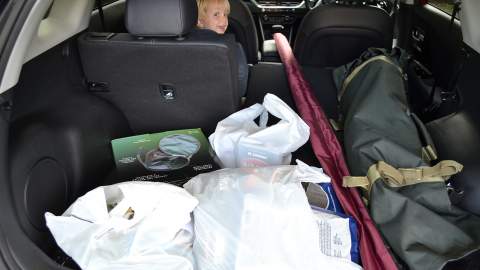 Push on however and the lack of power is quite notable. A knock of the gear shift into Sports mode and the centre display lights up with an impressive animation of a rev counter on fire hinting at something which never comes. With a 0-62mph sprint of 11.1 seconds and a maximum 139hp

and 195lb-ft of torque, the Niro HEV really isn’t a car to ask even a modicum of speed or performance of.

Equally the car feels at unease being asked to do anything more in the corners than a family car can be expected to. This probably comes as no surprise, however if you’re looking for something more sporty then look elsewhere.

The ‘4’ model is fitted with radar guided Adaptive Smart Cruise Control and Stop & Go, as well as Lane Keep and Lane Follow Assist Systems and it will do a fairly decent job of keeping the car in lane, but it doesn’t seem to look ahead as far not anticipate corners as well as others. In fact, a number of times it hadn’t seen a corner until quite late which meant that it tended to sway in the middle of the lane unless driver input was given which kind of defeats the object of lane assist.

We also found the cruise control itself a bit laboured if approaching a hill. Because the car has little power we found it changing down quite heavily and then not making up its mind which gear to be in. 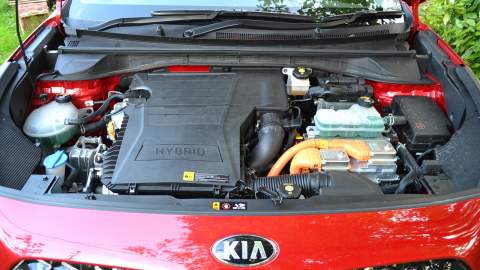 Kia suggests an MPG of up to 58.9mpg which probably isn’t a very bold claim. We averaged between 45 and 50 mpg without actually trying very hard. However, even if you do a small amount of miles you may struggle to do them on pure EV mode. We found that even with a very slight push on the accelerator, if the car showed anything less than three-quarters charge it would move the first ten or so feet in EV mode and then start the engine.

After driving it for a few days the displays did show that we had used a fair amount of kilowatts and thus must have been using the generated electrical energy. The engine can work in various different modes dependant on the driving conditions from powering the wheels, to generating electricity to power the wheels or just charging the battery, however as we say it was almost impossible to drive on pure-electric like you can in a plug-in or indeed other self-charging hybrids.

In true Kia fashion you get a seven year / 100,000 mile warranty or a two year unlimited mileage warranty which means in theory if you did really high mileage a year you could still own a fully warranted car at over 100,000. Either way, that warranty is a highly attractive proposition as Kia is no doubt fully aware of. 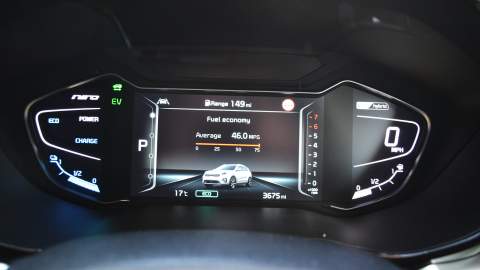 The Hybrid’s mid-life updates include new bumpers, redesigned headlamps incorporating Kia’s unique ‘ice-cube’ design (with LEDs on the ‘4’ grade) and new wheel designs, all of which combine to give it a more purposeful appearance on the road. Think more makeover than facelift – you’ll certainly still recognise it as a Niro retaining what Kia call its iconic ‘tiger-nose’ grille, but the refreshed design aligns the Hybrid with the appearance of the all-new all-electric version.

With a more upscale, high-quality interior and enhanced connectivity, there’s new trim and soft-touch materials, plus improved tech options, which we’ll expand on in the next section. In summary it’s the kind of set-up you expect from the premium German brands. 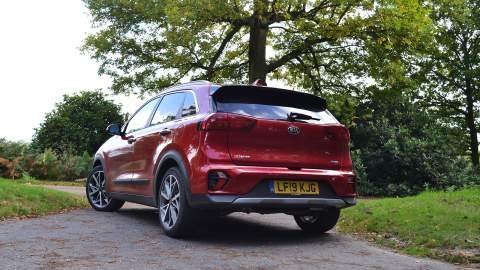 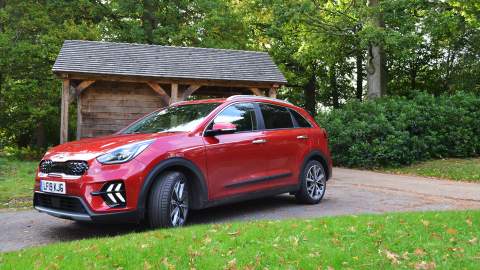 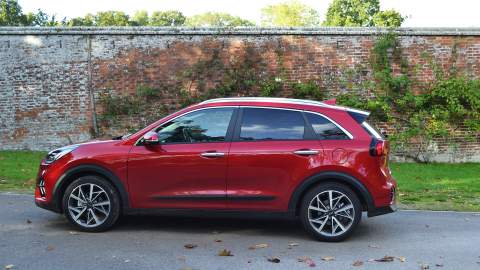 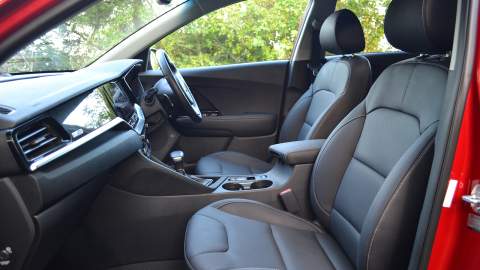 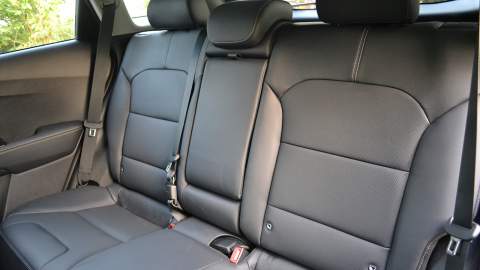 The Niro HEV has a surprising amount of space both front and rear. The rear can easily fit two or even three adults comfortably and we’re not talking short haul budget airline comfortable here. Our only gripe about comfortability is that the driver’s seat doesn’t go down far enough. Kia has clearly opted for a raised driving position but it means that your legs can tire after a while.

The cabin noise on motorways was a lot quieter than we’d expected as reading other reviews the Niro had been called out for being noisy. We didn’t find this at all and felt it quite comfortable, in fact I made a number of hands-free calls, a good test for cabin noise we find, and had no issues at all.

The 10.25 infotainment infotainment system in the centre of the ‘3’ and ‘4’ spec cars is one of the best in its class. They generally feel a lot clunkier at this end of the market but it’s well laid-out, gives immediate access to the common controls and is extremely intuitive. It’s also set into the dash and reminds us of Alfa Romeo’s recessed system in the Giulia, although not quite as well blended in.

The general build quality feels good and whilst the cockpit is largely plastic, it doesn’t feel cheap and in the ‘4’ spec its fully loaded with a whole array of design and comfort enhancements, as well as safety and driving dynamic systems. Just some of the highlights include dual automatic air conditioning, heated (plus ventilated) front and outer rear seats, 8-way driver’s power memory adjustable seat, heated steering wheel, wireless mobile phone charger, auto diming rear view mirror, eight-speaker JBL sound system with sub and external amp and a tilt and slide power sunroof. 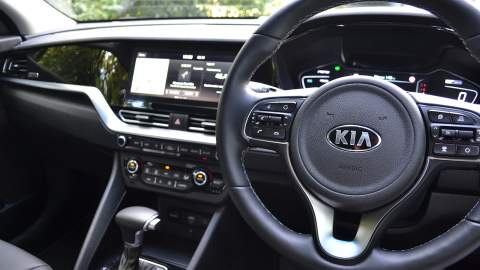 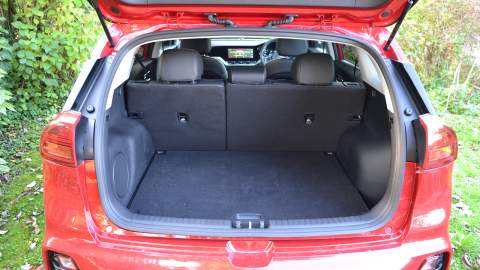 We found the refreshed Kia Niro HEV a very good car for its list price. At £3k under the average new car cost in the UK you get more kit, a much longer warranty and more space than a number of the European competitors.

What you don’t get is the performance and handling or some of the refinements, but at less than £30k I can’t see anyone complaining.

We’re hoping to be able to review the plug-in variant and the full EV shortly and we expect both to be a bit better than the self-charging hybrid, but with the plug-in starting at nearly £32k and the E-Niro from £36k you’d expect them to. 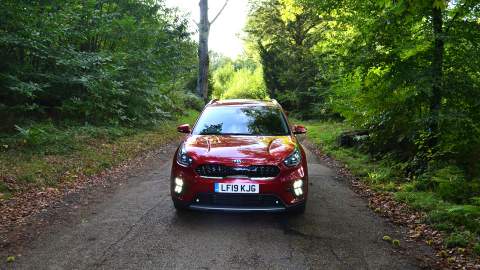 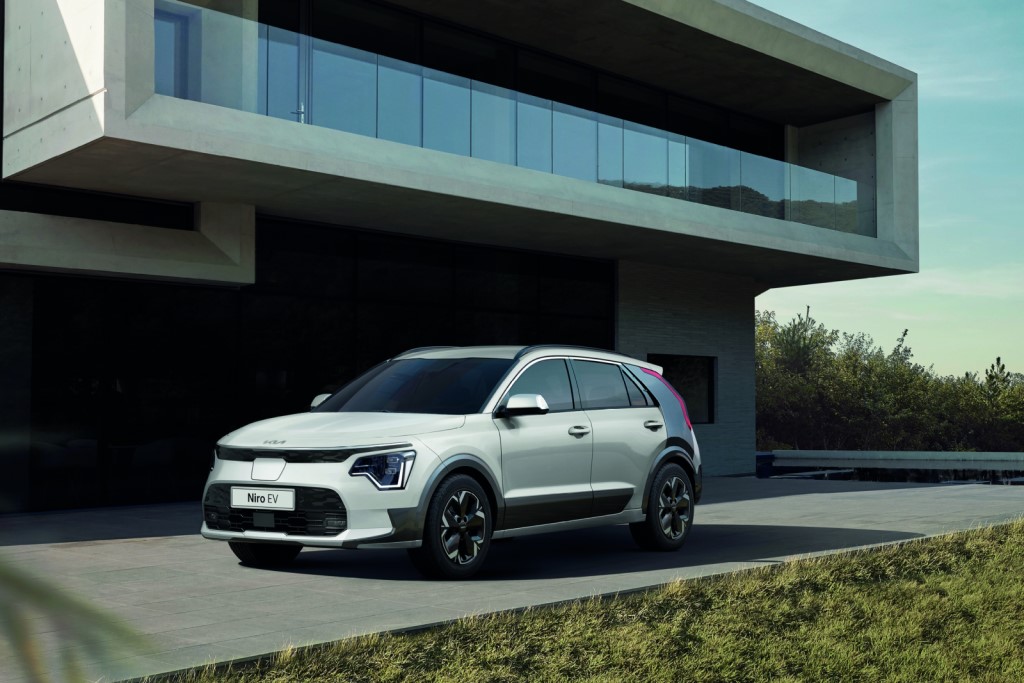 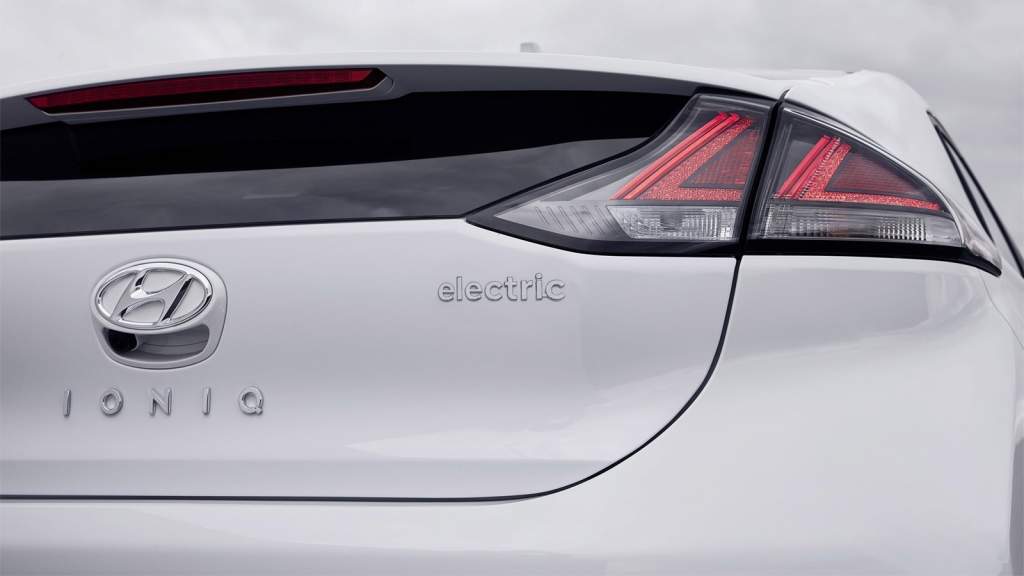 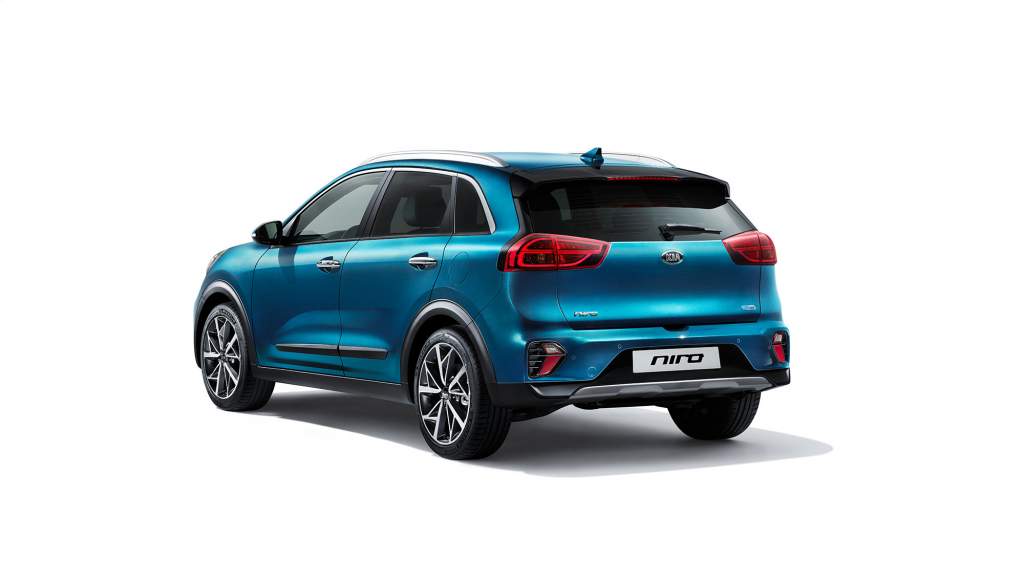