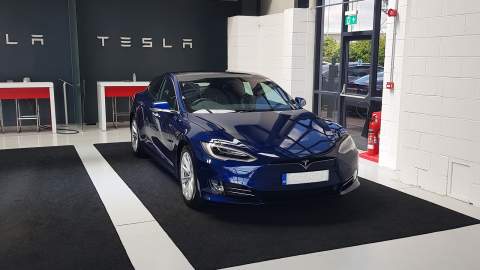 On 4 May, 2020, we had owned the Model S for a year! It’s flown by and been an almost pain free experience. As of today we have driven 7612 very enjoyable miles. That would have been a lot higher but we had to cancel a road trip to the French Alps due to coronavirus. It’s a shame as it had been meticulously planned out and thanks to the fact we were offered free Supercharging for life when we bought it, it would have cost us nothing to get there and back. In our old car – an Audi A6 Estate – this would have probably cost around £200 in diesel.

We have spent zero money on car maintenance in this time. Yes, zero, nothing, nada, nil. We have averaged around £15 to 20 a month on charging at home and use Superchargers infrequently depending on the journey. Another great bonus is that the government scrapped the luxury electric car VED tax that saw all owners of £40k plus EVs having to stump up to £320 a year for the first five years of vehicle ownerships, so again, we’re quids in!

Now the car is over one-year-old we have to pay for premium connectivity. This comes in at £9.99 a month for unlimited data, Spotify, traffic updates and satellite maps to name but a few features. Hardly, a king’s ransom. 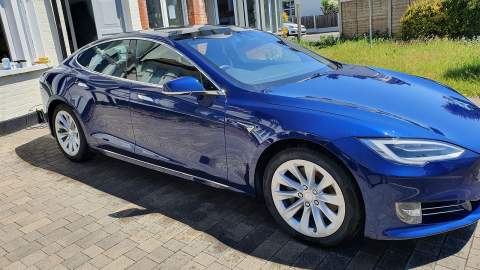 Thanks to software updates every few weeks it’s a far better car than the one we picked up at the end of May 2019 (how many other cars can you say that about?). No more ‘dancing cars’, with much better visualisation of all of the sensors, now recognising cones, people, cyclists, motorcyclists and all variations of vans and trucks.

There is also a lot for the kids to do, with more games, ‘Car-aoke’ (lets you sing your heart out with the kids and wife on a road trip – or by yourself), music and drawing programs for if we are stuck stationary in the car (or on the drive during lockdown!). Bizarrely whenever I think ‘wouldn’t it be good if…’ an update comes along with the functionality I was thinking of. The last thought for example was, ‘wouldn’t it be good if I could see the video that was recorded when sentry mode was triggered?’ Voila! 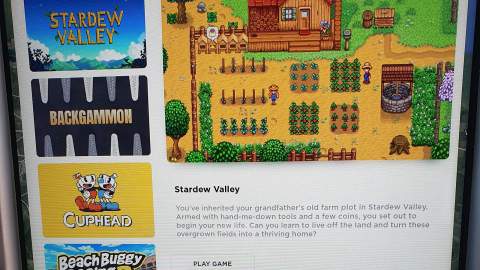 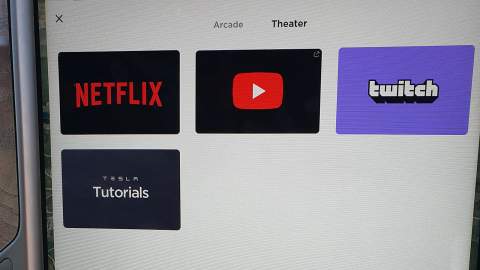 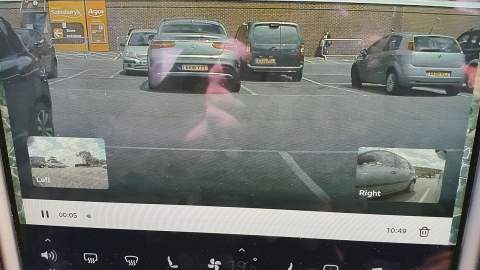 Range is still spot on at 320 miles as it is pre the new ‘long range’ variant. As with any car if you do lots of stop start driving the charge is not as good. Rather than starting the engine you are shutting down and restarting lots of computers. Equally, if you are lead footed the charge drops more quickly as you’d expect. It’s still great fun though as even with this ‘slow version’ of the Model S it will still hit 60 in four seconds, where permitted of course!

When driving a Tesla, or most EVs for that matter, you change the way you drive to the point you hardly ever touch the brakes. You let the car slow down via regenerative braking adding energy back into the battery.

A few months ago, my wife took it for a three-day trip and didn’t charge it once. As I said previously range anxiety is really a myth, and she came back having done a lot of driving with about 30 miles of range left.

Personally, I’ve driven it a lot to Wales for dive trips, and again, it is hassle free, plus I regularly arrive there with almost enough range to do the return trip, which is impressive! I’ve also tried a few of them on the M25 and M4 and all provide a great experience. 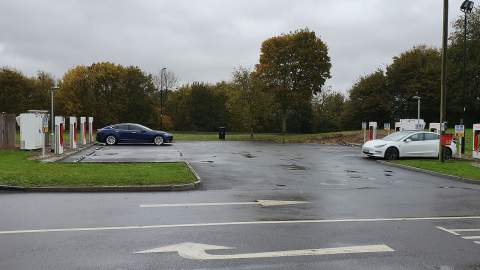 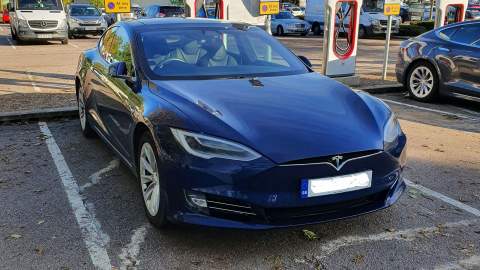 We also had a nice holiday in the New Forest where the huge amount of storage in the car meant that there was virtually no luggage in the main cabin, despite taking the dog! Another time, I took the kids to my office at Christmas, and took advantage of the free supercharging in Canary Wharf as they saw father Christmas. 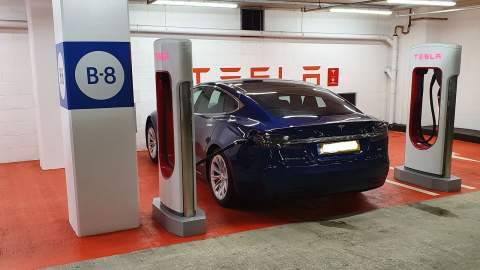 There is lots of discussion around massive loss of range over winter. Yet another myth. Yes the range is less but with the heater on in the cabin and clearing the screens this is expected in the same way as an ICE car. What is amazing is using the Tesla App to prepare the car for you in winter. It really is toasty by the time you get in and even warms the battery for optimal performance! We really experienced very little degradation in range over the winter months. 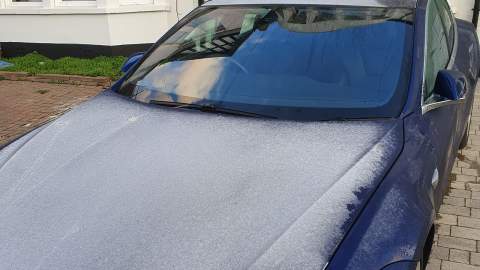 We had owned a load-lugging Audi A6 Estate for six years. With two kids and a dog together with all of the paraphernalia that comes with it over the years – buggies, school stuff, dog bed, you get the picture – it was perfect for a long time. It was great for crossing continents too, but it was absolutely awful for anything other than long journeys. When you’re averaging around 20mpg out of a 3.0-litre twin-turbo diesel it’s not a laughing matter. The car was also getting to the age where it would probably require some expensive TLC soon, that and we fancied a change. 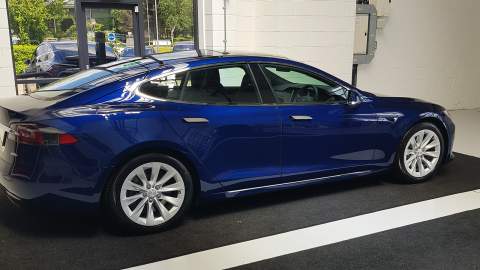 We felt a hybrid was just a stop gap – we wanted to go full electric, and so the search started.

We tried an Audi e-tron, and found it to be a very impressive car. It felt in a lot of ways like getting back in our A6, but it just didn’t have that ‘something’ that attracted us to it. This, combined with the fact that I knew more about the car than the sales guy, who incidentally was about 20 years old (showing my age, here) and his aggressive insistence that I take expensive finance meant it was a big no.

So, we started looking at alternatives. Nissan LEAF – too small. Zoe – way too small. Tesla – hmmm… 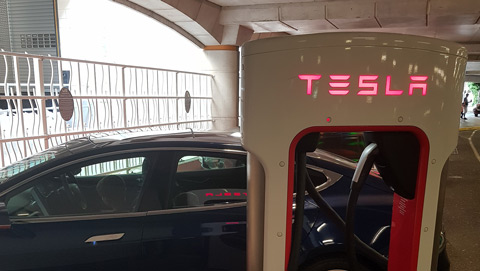 We had previously looked into buying a Tesla a couple of years ago and borrowed a Model S for the weekend. The thing that ultimately put us off at the time was the seats and the ride: both uncomfortable. We were tempted back when I saw the Model 3 in the London Canary Wharf showroom so started talking to the sales guys again.

Unfortunately the Model 3 – being a four-seater saloon did not tick our boxes with respect to the kids and dog. We could have gotten away with four seats, but the dog might have objected to being thrown in a dark boot! The Model X was too big for what we wanted, so we started looking at the Model S again. New or used: that was the question. After lots of investigation we started to move towards a used one, and looking at what spec we wanted.

There are quite a few used ones around, but the problem seems to be twofold. Firstly, they really seem to hold their value, secondly used car dealers seem to have no idea how to market them or even document what they have and haven’t got. In the end we got very close to buying a 17 plate Model S 75D that was highly spec’d, that was until we got a call from the Tesla sales guy. 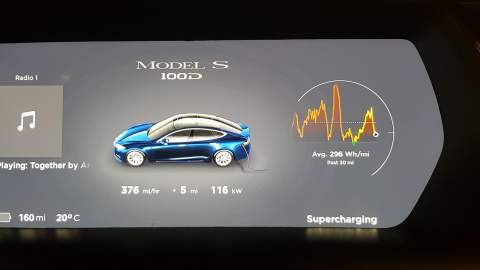 A number of cars had been released that they wanted to move. We were offered a high spec Model S 100D, unregistered, with free Supercharging for life, and around £20k off! Given this and the fact we were looking to buy a two-year-old one with an average mileage of around £60k, and it was a no brainer. A deposit was put down and a test drive arranged.

We went to test drive a Model S 100D with pretty much the same spec on 12 May – literally every box ticked apart from full self-driving, we also purchased a CHAdeMO adaptor and rubber mats for the front and rear boots. After a two hour test drive on various road conditions the improvements in comfort and air suspension since we last drove one had us sold!

Overall the sales experience with Tesla was amazing. We didn’t need to chase them and we got regular email and phone updates throughout the process. Our only criticism is that they do not give a lot for a part exchange. What we did is agree the part-ex with them but found a better offer so took that instead. My one tip for anyone considering a Tesla, is to use comparethemarket.com or similar instead of Tesla. We got 33 per cent more for our Audi on there. Obviously we could have perhaps got a bit more if we sold privately but it was a ‘dirty diesel’ so that was a risk we did not want to take. 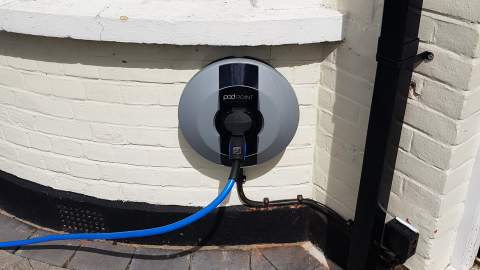 What a complete myth! We took the vehicle before we had arranges for a Pod Point home charger to be installed at home. The Pod Point didn’t come until 29 May (we picked up the car 24 May) so we had a number of days where we could only use a three-pin domestic socket or a public charger. And it was not a problem at all!

I took the car to the local GeniePoint charger a mile away from our house to test out the CHAdeMO. It gave us 50kW DC into the car and charged us back to full in about 30 minutes. All in all, a perfect experience. We have also found the range displayed on the car to be extremely accurate. I read recently that someone was saying that the 300 plus mile range was nowhere near correct and more like 200 miles. I drove the 190 miles to Wales and when I got there the range still said approximately 140, so that puts that false information to rest! 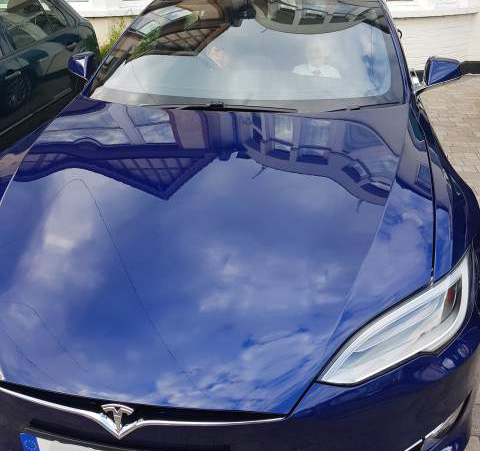 We have now done 1100 miles. It has cost us around £15 in home charging, and other than that we have used destination chargers at hotels (7kW) and Tesla superchargers (120kW) free of charge.

There really is no issue with finding chargers: public, free or destination. Things like Zap-Map are invaluable and the integration of Tesla supercharging into Google Maps in the car means you can see how many free bays are available. Even now we are still finding new features, not to mention what feels like weekly updates with new functionalities! One such feature is that if you navigate to a Tesla supercharger the car pre-warms the battery – reducing charging time by up to 25 per cent.

I can honestly say that the charging part of ownership is no inconvenience at all. Upon returning from Wales I stopped after two and a half hours of driving at South Mimms (where there is 12 superchargers!) and by the time I had had a coffee and a snack I was good to go again!

Thank you - great review, very informative and interesting to read.