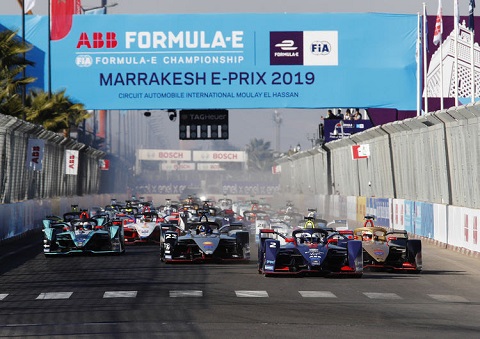 The real world of Formula E: From embryo to endurance

Analogies were inevitable, as was early and understandable sarcasm; face it, a racing formula, juiced by electricity, was as alien as Elon Musk rocketing to the stars and back but, states Iain Robertson, with a little stoicism, it is delivering and developing.

Flick a switch. Any switch. A lamp illuminates. The kettle heats. The computer powers up. Electricity is instant, largely silent and compelling in its harnessed potency. Give that same instinctive response to a racing driver more familiar with the smell and noise of dinosaur fuel and the reaction is electric.

When Spanish entrepreneur, Alejandro Agag, first mooted his intentions to formulate Formula E around eight years ago, apart from a will to use his connections with the FIA, motorsports’ Parisian governing body, even he doubted that his dream formula had legs. Yet, with a world motor industry coerced into alternative fuelling, Formula E presented an instant reaction and desire for direct involvement. It was compelling.

However, let me provide you with a potted Agag history… Born in Madrid, educated internationally, a multi-linguist, he won a seat as the youngest Spanish representative in the Euro Parliament and became the PA to the Spanish prime minister by the age of 28 years. He turned his back on politics and, with business partner, Flavio Briatore (former Benetton F1 boss), bought the TV rights to F1 in Spain. Then he managed a GP2 team and ran Queens Park Rangers FC, before winning the tender to operate Formula E. 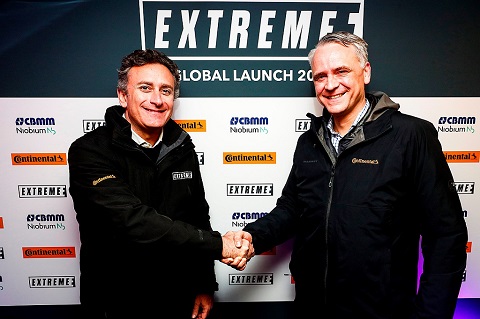 Just as traditional motor racing had been a development front for the motor industry, Formula E could provide a similar notion, however novel. Typically, the UK provided an inspirational base, at Donington Park, in the East Midlands. An adjacent airport. A ‘test facility’. A wealth of automotive expertise. A brand new factory. The switch was instant. Formula E was ‘Go!’.

Equally instantaneous was the marketing brief. Working to a remit of creating a ‘volte face’ to the conventions of F1 super secrecy, Formula E was public fodder. Securing city centre venues was easier than anticipated. The concept of ultimate and legal street racing was a commercial runner, aided by series sponsorship and a hefty will to succeed, which made its first televised race both look and sound decidedly comic-book.

Drivers, who may have appeared like refugees from other senior formulae, had two cars apiece, with a pit-stop mid-race to swap seats, because the battery range was insufficient. The first event’s clashes and rollover, at the Beijing opener, created world news. Yet, full public access granted Formula E a positive response, because fans could boost their favoured driver’s performance via an online, social media voting channel. Even the drive motor whirring was strangely addictive, despite losing the visceral (and aural) appeal of F1. It was a one-make series, with Dallara making the cars, Williams Advanced Engineering providing the battery packs, with the motor and inverter from McLaren Advanced Technologies and Hewland providing the five-speed gearboxes. Formula E, despite its minimal warts-and-all growth in full public glare, was certainly a goer. 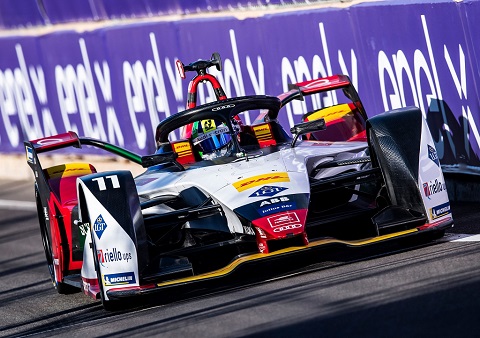 Five years on and the Formula E Championship is something to which to look forward. Different constructors are allowed and, while energy use is restricted to 28kWh, power development has increased. Its superstar racers are known commodities. The promised technological developments are being delivered. There is no need to stop and swap; the latest battery packs have enough charge (and fan-boosted supercharge) to carry full race distance and any cruel japes about milk-carts are now childish insults. Formula E is a full performance package, a gloriously colourful series for 11 teams and 22 drivers, competing in 12 cities, on five continents, for a 13-race championship, to which ticket prices (at an adult average of 30 Euros; children are free) are accessible.

It is the street connection that makes it viable and manufacturers relish the race car-street-road car platform. That is why Jaguar, Nissan, Mahindra, BMW, Audi, DS and other carmakers are on-board; they can justify readily the developmental potential. Formula E has never been a follower– it is a disruptive leader, at a time of great necessity. The 250kW (get used to the alternative to 335bhp; brake energy recovery boosts 150kW back into the system) on tap enable the 0-60mph benchmark to be completed in 2.5 seconds, with a top speed nudging 180mph, the slippery aero package, with its signature ‘enclosed’ wheels, maximising efficiency. International TV coverage builds a staunch following and the circuitous city centre venues provide amazing excitement and close proximity duelling of an order sorely missing from other processional formulae. Fortunately, the commentary team has matured and no longer has to impress, or enforce pseudo excitement, as the racing speaks (quietly, yet effusively) for itself. Formula E is not a between contracts retirement home for former F1 drivers and even provides a practical bridge between two pinnacle sporting endeavours. F1 may not agree but its protagonists forge the links. Even the ‘driver halo’, the protective roll-cage extension, looks more at home on Formula E than any F1 entry.

In just eight years, Formula E has become a study programme at Harvard University, has received environmental awards, has gained sustainability accreditation, has introduced Dare to be Different initiatives and encouraged battery recycling programmes. It enables gaming activities and even supports virtual racing, all of which involve the public at every juncture. However, Mr Agag is building his empire, like a latter-day superhero, from his operational base on the good ship St Helena (a former Royal Mail vessel), berthed temporarily alongside Tower Bridge, London. 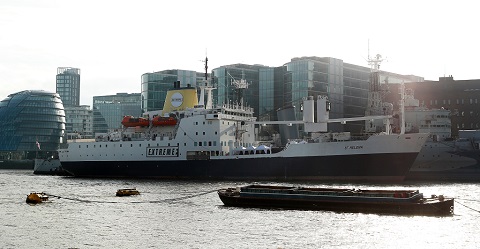 Taking E to another planet

Take five of the least hospitable and specifically most endangered geographical regions of our planet, invite controversy but match it to the peripheral benefits of Formula E, while raising awareness of melting ice caps, deforestation, desertification, retreating mountain glaciers, plastic pollution and rising sea levels. There is an answer, apart from engaging with Sir David Attenborough, and it is Extreme E.

Set to commence in January 2021, not that the public’s rush to drive SUVs has any motive force, a series of five off-road challenges in the Arctic, across the Himalayas, through the Sahara Desert, charting the Amazon rainforest and traversing islands in the Indian Ocean will feature E-SUVs in two groups of six teams. Working to a knockout formula, each stage will be between 6 to 10km (3.7 to 6.2 miles) in length, with virtual gates to be navigated through, in a ‘Blue Planet meets Paris-Dakar’ competition.

Filmed in a ‘docu-sport’ format specifically for network TV channels, Extreme E already boasts of its carbon-neutrality, major league sponsorship and comprehensive funding. The RMS St Helena, converted to reduce her emissions, will act as the logistics, accommodation and garage hub for the new series. French-born but Brazilian national, Gil de Ferran, an international racer at heart (counting F1, IndyCar and the American Le Mans Series on an impressive CV) is chairman of Extreme E. Mr Agag is its intuitive founder.

The electrification of motorsport has escalated on the back of the success of Formula E. Consider the following as examples of a largely unrealised potential:

It’s also worth noting that Volkswagen made the headlines with its Pikes Peak I.D. R entry, claiming a new world record for the fastest Colorado Springs hill climb time of 7m 57.148s in an EV. It is intended to break another speed record on the infamous tarmac and concrete Tianmen Shan Big Gate Road in China, also known as the Road to Heaven. In 11kms, the route climbs 1,100m, through 99 tortuous corners, with severe drop-offs adding to the challenge. 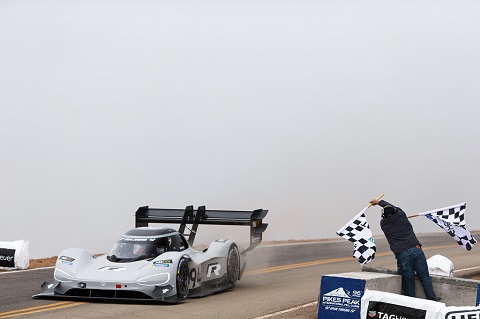 Volkswagen made history at Pike's Peak

Vehicle manufacturers worldwide are gearing-up for an electric future. Innovators, like Messrs Agag and De Ferran, are giving EVs an additional and essential jolt and, unlike fossil-fuelled rivals, where a technology halt has been created unwittingly that has led to a reduction in TV audiences, even with electric-hybrids in F1, E-Racing at a variety of levels is driving forwards at an organically manageable pace.

The judicious placement of former F1 stars in Formula E, like Alain Prost and his long-standing relationship with Renault, a vehicle manufacturer already committed to a future in EVs, is a measure of the driving impetus of Formula E and, while the two pinnacle motorsport endeavours are not interchangeable as yet, only time will tell how enduring one will be over the other. 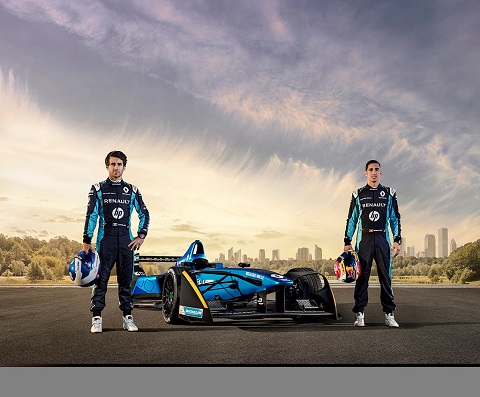