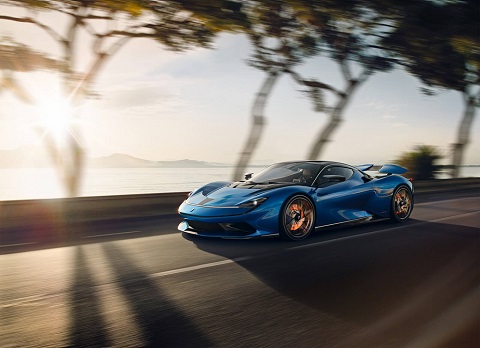 Pininfarina boosts EV inspiration in the largesse of its Battista hypercar

The Pininfarina Battista – the most powerful car to be designed and built in Italy slips quietly into London’s Ultra Low Emissions Zone (ULEZ) for its UK unveiling. Iain Robertson gives us the lowdown on the electric hypercar.

Boasting headline figures of 1873bhp (400bhp more than a Bugatti Chiron) and a remarkable 1696lb-ft of torque, while Pininfarina is better known as an automotive styling house, its new Battista super high-performer is a rarity in the company’s history of producing vehicles. Paolo Pininfarina, chairman of the company, declares his immense pride in the application of his grandfather’s name to the new car. Yet, this is no ordinary hypercar, as it features an all-electric, 4x4 drivetrain, with five-mode chassis vectoring, to deliver a prodigious performance envelope.

With first deliveries due in late 2020, just a few months before the controversial ULEZ regulations extend to the whole of Greater London in 2021, the Battista’s electric powertrain provides extraordinary performance within a dramatic body style, created by its director of design, Luca Borgogno. Naturally, his inspiration comes from a heritage of stunning Pininfarina outlines created over the decades, by a company that has enjoyed long-standing links with Ferrari among other brands. Battista stands out with its purity of form that turns its back on the more overt and sometimes ugly offerings in the hypercar scene.

However, with a single-charge range targeting 300 miles, for a possible non-stop drive from London to Paris, with a sprint from 0-60mph occupying less than two seconds (faster than a modern F1 car; 0-186mph in under 12 seconds) and a projected maximum speed knocking on the door of 250mph, the Battista statistics represent a new reality for electric cars, before ultra-low emissions move to zero emissions regulations. It can be described fairly as a poster car for today and tomorrow. 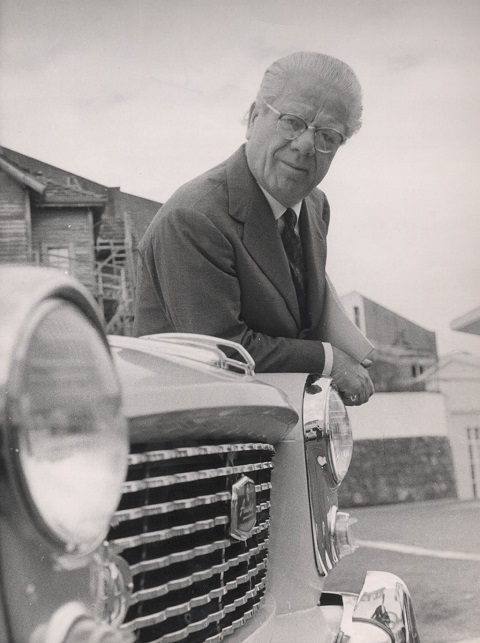 Michael Perschke, CEO, Automobili Pininfarina, told us: “The Battista is a truly beautiful, guilt-free hypercar; the first EV to really fall in love with, because electricity enables us to develop it with zero emissions and it is the most powerful car that will have ever been designed and built in Italy. As London joins many cities in moving towards a more sustainable future, we hope that Battista also inspires a generation to consider electric cars, not just through the benefits of zero emissions, but also through the beauty and the performance that electrification can offer.”

As EV demand increases exponentially, the Battista redefines whatever views may be held about technology. Last year witnessed new levels of popularity for the electric car buyer. EVs were the fourth most-searched-for segment among car buyers in the UK. The USA’s best-selling luxury car in 2018 was an EV (Tesla Model 3) and, in Norway, a nation built on oil revenues, its best-selling car in 2018 was also electric (Nissan Leaf).

Just twelve months since the Automobili Pininfarina luxury EV car business was first announced, the Battista’s place as the most powerful, unerringly luxurious and beautiful to behold electric car that would be available to order, serves to highlight the technologies and desirability that electrification offers car buyers and underscores its pinnacle role. In equal measure, its combination of performance and the lightweight Pininfarina-designed carbon fibre body appeals to traditional supercar collectors and automotive connoisseurs alike. It is pure supercar in its style, with a charging e-port that glows and pulses according to its state of charge but also reveals its electric-car credentials. 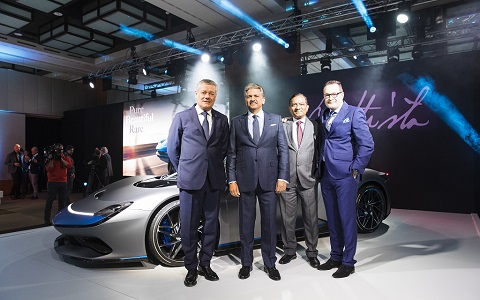 Contained in a T-shaped pack, the lithium-ion, manganese and nickel 120kWh battery is liquid-cooled and configured to ensure that weight distribution does not upset the car’s fine dynamic balance. An electric motor per wheel introduces torque vectoring potential, which is managed infinitely, as traditional traction control and stability systems just cannot cope with the instant energy delivery. The maintenance-free electric motors feature permanent magnet reduction systems, working in pairs fore and aft, yet also independently.

Although the interior décor is intended to be tailored to each buyer’s requirements, a number of standard features will be carried over, including the small diameter racing car-style steering wheel that sits ahead of two digital instrument clusters, with specific screens reserved for vehicle dynamic read-outs and other functions, such as sat-nav. Although some switchgear exists within the minimalist cockpit design, minor controls on the steering wheel spokes enable access to a series of operational menus.

Three examples of Battista were shown at Geneva in March, each featuring different exterior detailing (such as red, or blue, and sill styling strips) and alternative leather treatments for the cabin. While quilted hide has been applied to the flip-up doors, virtually any material can be applied to the car’s interior, as part of its bespoke appeal. Only 150 examples of the hand-built Battista will be produced by Pininfarina, distributed equally to North America, Europe and the Middle East markets. 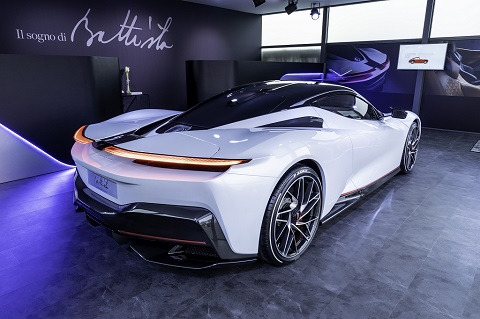 One of the more apposite corporate buy-outs occurred on 14 December, 2015, when Indian conglomerate Mahindra & Mahindra bought Pininfarina SpA. The highly-regarded Indian firm had been considering EV options for a number of years and was outbid in 2012 by National Electric Vehicle Sweden in its efforts to acquire the bankrupt Saab. As far as Automobili Pininfarina is concerned, its CEO, the aforementioned Michael Perschke, was poached from Audi India to head-up the new project that ran initially under the handle ‘Project Montana’.

The new company forged links with Croatian EV start-up operation, Rimac Automobili (an example of its own EV supercar was crashed famously by Richard Hammond, while on test with BBCTV’s Top Gear) to supply the EV powertrain and battery technology for the Battista and a future run of luxurious zero emissions models. The internal model name for Battista is PF0, which makes PF1 a logical choice for the planned North American Rivian Automotive R1-based crossover model, details of which are scant but highlight the amount of technology share taking place across the EV industry.

Luxury cars have provided a foundation historically to innovate the mass market. While Battista’s limited production run will ensure that the hypercar remains rare and collectable, it is anticipated that its pioneering position for zero-emissions desirability will accelerate demand and desire for other EVs, if not quite as rapid as the acceleration of Battista itself. Incidentally, Automobili Pininfarina is a German company, based in Munich, although its design facility and office are in Turin.

Off the back of the London City reveal of Battista, chosen because of the Mayor of London’s imminent introduction of the ULEZ project, it was also being shown at the exclusive Goodwood Members’ Meeting, while on its brief trip to the UK. Professional racer and, since late 2018, brand ambassador and development driver for Automobili Pininfarina, Nick Heidfeld, has been a contracted driver to Mahindra Racing in the Formula E Championship since the 2015-2016 series. As a former F1 racer, commencing his career in the premier series in 2000, he has driven for Prost, Sauber, Jordan, Williams and Lotus-Renault, and holds a number of records (most podiums without a victory; most 2nd places; and greatest number – 41 – of consecutive race classifications). His engagement with the company is understandable.

Nick stated: “Even when driving a Formula One car, I could feel a slight lag in the delivery of its engine power. With the Battista, there is no such throttle delay. Its responses are literally electric. In fact, we are placing far greater control in the hands of a driver than in any conventional, internal combustion engine high-performance car.” Although drivable, the Bianco Sestriere pearlescent white car (named after the snow that falls at the Italian ski resort), which also debuted at this year’s Geneva Motor Show (in March), is not being used as anything other than an immaculate static display.

Nick was delighted to accompany Lord March in his personal Pininfarina designed 1955 Lancia Aurelia B20 Series Gran Turismo on a Goodwood Circuit tour and for several photo opportunities alongside the infamous flint wall on the Goodwood Speed Hillclimb course. Nick is the current record-holder on ‘The Hill’, having set a time of 42 seconds in 1999; his record has never been beaten. The Battista attracted huge attention from visiting crowds and invited guests at the prestigious meeting. 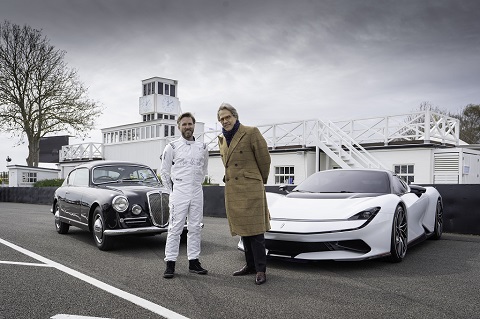 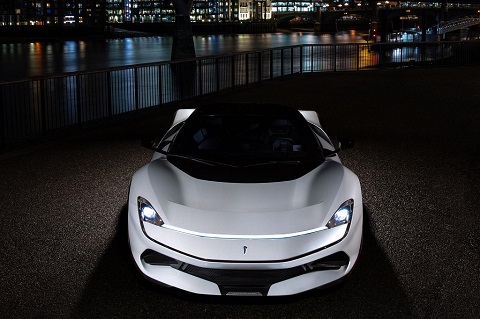 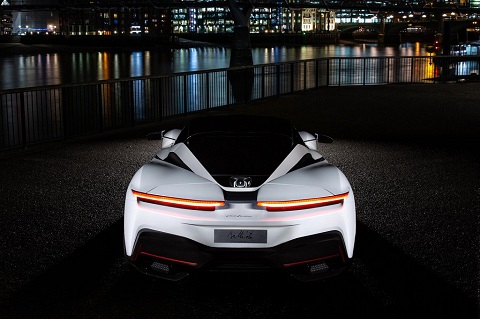 With only 150 examples being available at a sky high price tag (£1.6 to £2 million), the Pininfarina Battista is more of a beautiful and memorable showpiece at this time, than accessible EV, but it is a car that can inspire and encourage the uptake rate of EVs at an important time in the drivetrain’s development. 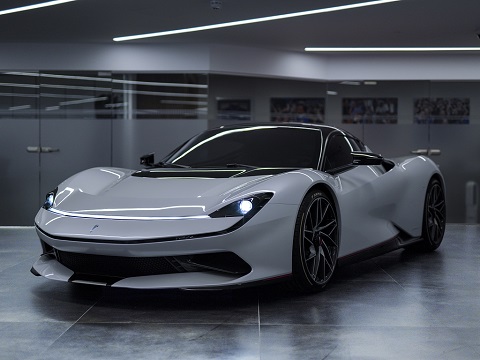 H.R. Owen welcomes the Automobili Pinfarina Battista to its London HQ, as the newly announced partner for sales and service of Battista in London

Love the look of this. If Aston Martin and McLaren had a baby, this is what it would look like.