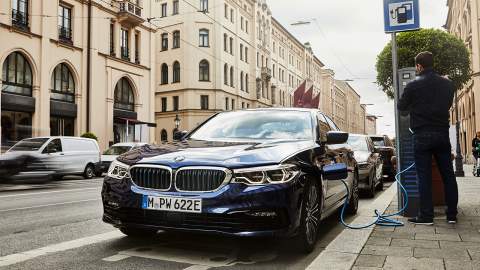 BMW has updated its 530e PHEV with a new, more energy dense battery, refined energy management and the option of the brand's xDrive all-wheel-drive system. This has resulted in greater range on battery power only, as well as reduced emissions and fuel consumption. Alongside this news, BMW's schedule for electrifying its range has become clearer under its new boss, Oliver Zipse, thanks to a bit of investigative journalism in Germany.

With the 530e and 530e xDrive, BMW has managed to squeeze more capacity into its battery without increasing its physical size. Thanks to better energy density, the battery has gone up from 9.2kWh to 12kWh, retaining its position under the rear passenger seats and the 410 litres of luggage space in the boot. Charging time via a household wall socket is under six hours, while a BMW i Wallbox will juice it in around three and a half hours.

As a result of this increased capacity, the 530e in two-wheel-drive form can now do between 38 and 41 miles on electric-only power, which represents an increase of around 10 miles over the previous version. Fuel consumption is down by over 20 per cent to between 157 and 176mpg, while CO2 emissions sit at between just 36 and 41g/km.

Whilst the additional weight and drag of the xDrive system means the 530e xDrive doesn't quite match the standard car, its stats are still impressive. Electric-only range is between 34 and 36 miles, while efficiency sits at between 128 and 141mpg. Emissions for the xDrive are between 46 and 49g/km of CO2.

Underneath the body of both the normal 530e and 530e xDrive is BMW's 2.0-litre, four-cylinder TwinPower Turbo engine generating 181bhp. This is integrated with an 111bhp electric motor to deliver a combined 248bhp and 310lb-ft to the wheels through an eight-speed Steptronic transmission. The 530e and 530e xDrive hit 62mph in 6.1 and 6.2 seconds respectively, and both top out at 146mph.

BMW's intelligent energy management and eDrive has been optimised to maximise range and efficiency. In the standard AUTO eDrive setting the car will hit 68mph under electric propulsion, but switching this over to MAX eDrive increases this to 87mph – obviously at the expense of range. As is mandated by EU regulations, the 530e has a pedestrian audio warning system that operates at speeds of up to 18mph.

BMW hasn't given us any price figures for the new 530e and xDrive just yet, but expect a slight hike in the £43,985 that the outgoing two-wheel-drive only version went for, and a bigger hike for the xDrive version.

According to an article in Automobile Magazine, journalist Georg Kacher's digging has added some clarity to what we can expect, and when, in terms of EVs from BMW.

iNext, due for release in 2021, is the main focus for BMW and will reportedly be called the i6. Three different performance levels are likely starting at 335bhp and topping out at 536bhp. A base 63kW battery will be complimented by a bigger 92kW unit, with 103kW mooted for further down the line.

i3 will continue in a more conventional form while its successor, reportedly to be both BEV and fuel cell, will join the line-up in 2022. Effectively an electric 3 Series, the i4 is due for 2021 which will be followed by the 5 Series-based i5 and X5-based iX5 in 2023. At the same time, the 7 Series-based i7 will make an appearance which, under its internal 'G70' designation, will likely be launched in pure-EV, PHEV and internal combustion forms.

In terms of the i8 – the options for which we have mulled over recently – Kacher reckons that it'll be a direct plug-in hybrid successor to the current model. He suggests that it'll combine a 201bhp electric motor with a 335bhp internal combustion engine. Unfortunately, it looks like any plans for all-electric version of the i8 have been cancelled.

As well as the cars themselves, Kacher reckons that BMW will gradually increase charging intensity over the next five years from 120kW through to 350kW as standard. At the same, battery voltage will see an increase to 500 volts and quite possibly up to 800 volts.

Of course, in time all of this will become clearer through official communications from BMW, but to our eyes Kacher's research looks pretty compelling. However, new BMW boss, Oliver Zipse, is apparently due to present an EV strategy to the BMW Supervisory Board before the year's out. Time will tell.

New BMW 5 Series get PHEVs across the range