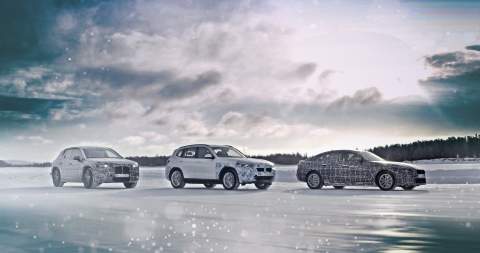 BMW are ready to bolster its all-electric offering with two more models, the i4 and iNEXT, joining the iX3 (due on sale in 2020) and the already-available i3 and i3s.

The Munich-based manufacturer has taken prototypes of the i4 and iNEXT, as well as the iX3, for vigorous testing in Arjeplog, Swedish Lapland, with a view to having the former two on UK roads by 2021. Carrying out the testing on the edge of the Arctic Circle ensures all models will be subject to some of the most extreme road and weather conditions on earth. After all, if the electric motors, high-voltage batteries and power electronics of BMW’s eDrive technology can perform well and reliably on frozen lakes, in snowstorms and during sub-zero temperatures, the British weather should be child’s play.

First to join the market will be the four-wheel-drive BMW iX3 SUV. It will feature the fifth generation of BMW’s eDrive technology – a powerful electric motor and a high-voltage storage unit featuring state-of-the-art battery-cell technology. With a range of over 248 miles and the possibility to use DC charging stations with a capacity of 150kW to charge its battery, the company’s first all-electric SUV is ideally suitable for day-to-day use and long-distance travel. It can go from 0-60mph in less than six seconds and has around 369lb-ft of torque. It’ll be made Shenyang, China, as part of the BMW Brilliance Automotive Joint Venture and is expected to be priced around £55,000.

If a four-door coupé is more your thing, the i4 is BMW’s offering that’ll take on the Tesla Model 3. Like the iX3, it’ll receive the fifth-generation eDrive technology but has a much longer range than its SUV brother – anything from 340 to 435 miles, depending on the model, to be exact. It can reach 60mph in four seconds and has a top speed of 124mph, but torque figures have proved harder to come by… The i4 will start rolling off the production line at the company’s Munich plant in 2021 for an estimated price of £55,000.

Finally there’s the iNEXT, which doesn’t look an awful lot different from the iX3 from the outside or in terms of size, but since BMW are describing the iNEXT as its ‘technology flagship’, it’s fair to assume it’ll be fitted with copious bells and whistles where gadgets are concerned. It’s also touted to include level 3 automated driving (where a vehicle is capable of taking full control and operating during select parts of a journey, such as motorway driving, when certain operating conditions are met) and be more spacious and luxurious inside than the iX3.

In terms of numbers, the iNEXT will use the same platform as the i4 but, as it’s an SUV and therefore heavier than the coupé, BMW predicts a range of around 372 miles. With this model range BMW are very much looking at how they can move forward and permeate its DNA throughout the marque. “The iNext project will provide our building blocks for the future, from which the entire company and all its brands are set to benefit,” said BMW Group Chairman of the Board of Management, Harald Krüger. That means that over the next several years, this thing will provide the guidance for not just BMW’s line, but the MINI line as well.” It’ll be made at BMW’s Dingolfing plant from 2021.