The world’s greatest celebration of all things automotive has been and gone, and 2022’s Festival of Speed proved the best yet to find out more about electric cars. Here are some of our highlights.

What essentially started out as an automotive garden party in 1993 by the Duke of Richmond, the Goodwood Festival of Speed is now the world's largest four day car event showcasing an array of racing and road machinery and an opportunity for manufacturers to present their innovations to the public – some for the first time. A heady mix of cars, stars and motorsport royalty, it’s a must-do for any EV (and petrol) head.

This year the theme was ‘The Innovators – Masterminds of Motorsport' celebrating engineers, designers and drivers that pushed the bar and created significant milestones in development and engineering. Celebrating landmark innovations from past, present and future, the theme highlights the event’s increasing focus on technology, such as the ‘Electric Avenue’ which was introduced last year.

A place for customers to ask questions, inspect the latest EVs, and learn about the benefits associated with switching to electric, it most definitely had a more noticeable buzz about it this year compared to 2021 in that it was bigger, better and busier. There were also many firsts – experts from bp pulse and The AA were on hand at the new Information Hub to offer advice and host presentations on key EV topics, and test drives were available, with a range of companies, including BMW, Ford and Kia, offering experiences at the Goodwood Motor Circuit. It still didn’t feel like a core asset of the festival, but that will come with time as we get closer and closer to meeting the net zero target. 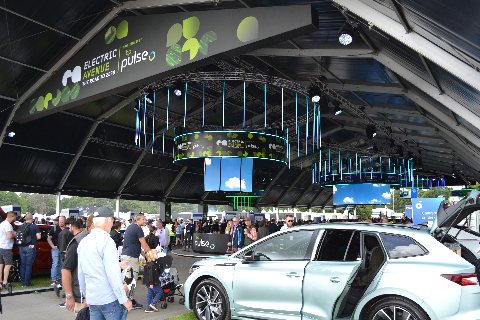 Situated between British Volt’s Concept Paddock (hosting a number of cutting-edge EVs in pre-production stages, including the Lexus Electrified Sport Concept, LFA’s spiritual successor and due be launched before 2025) and Future Lab (packed full of dynamic, interactive, hands-on technologies) is Electric Avenue.

With 30 cars on display from superminis to utterly mad hypercars and everything in between, clearly an outright favourite for a lot of show goers was the Renault 5 EV Concept. Making its UK debut, it still looked as fresh as the day the covers came off almost a year ago. Sadly the launch of this retro-futuristic little car isn’t expected until the end of 2023, but it was great to see it in the flesh – they’ve made a great job of making the old new and as long as Renault nails pricing, practicality, range and handling then it should be a roaring success.

Other exciting premieres included the European debut of the Solo EV from Vancouver-based firm Electra Meccanica. A single-seat, three-wheeler with a top speed of up to 80mph, and a range of up to 100 miles, it apparently has high-tech features and despite its compact size, ample storage too. The Fisker Ocean, which made its world debut at the 2021 LA Motor Show, made its first European appearance. Fisker who penned the model, claims it drives like a sports car, has a range of 275 miles and – much to the surprise of many of its competitors, is priced at £34,990 (for the entry-level model). It is being built by Magna in Austria and UK sales will begin in 2023. We spoke to the main man himself so keep your eyes peeled for a full interview.

The new updated MG5 EV, featuring significant styling, equipment and technology upgrades made its UK debut, alongside the gen 2 Kia e-Niro and eagerly anticipated Genesis GV70 – the third electrified car to be launched by the brand this year following on from the GV60 and G80 – and unveiled by Duke of Richmond himself. With a focus on luxurious sustainability, as well as comfort and driving pleasure, it also uses vehicle-to-load technology. Meanwhile Porsche used Goodwood to begin its two-year world tour of the 718 Cayman GT4 eperformance with a maximum output of 1073bhp. While it features the technology components of the Mission R and is based on the chassis of the 718 GT4 Clubsport it has 6000 redesigned parts. 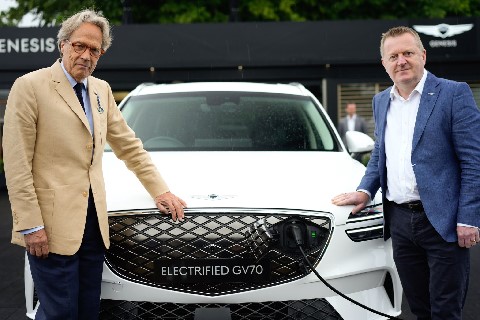 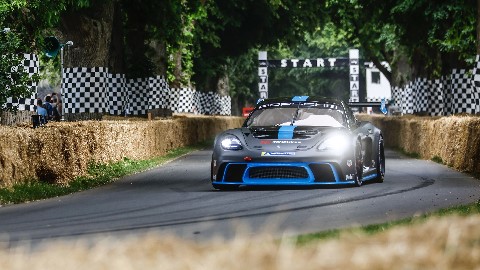 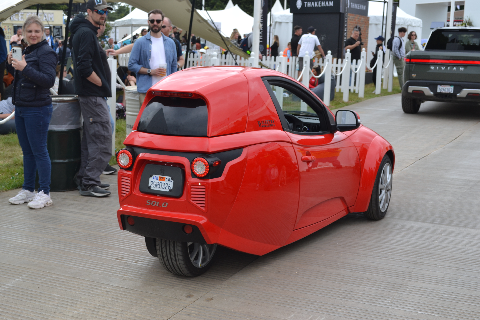 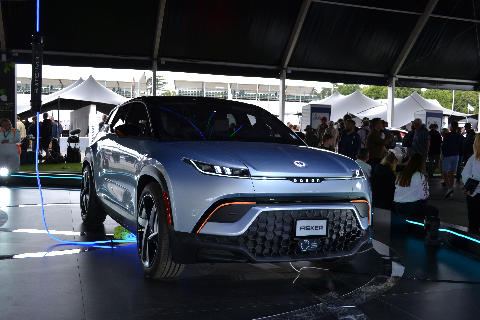 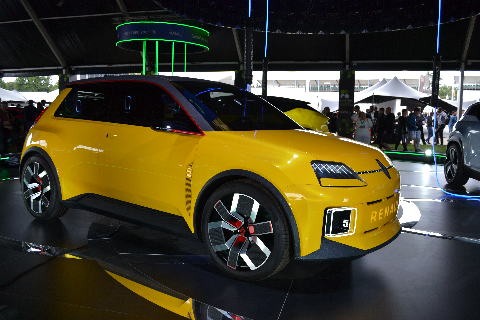 The Mustang by London-based Charge Cars has nothing to do with the Ford Mustang Mach-E, but a 67 Fastback. Built using officially licensed Ford bodyshells, a 63kwh battery, 50kW charging and a range of 200 miles, this car looks amazing, but if that’s not enough to put a smile on your face, a 0-60mph time of 3.9 seconds will. Sadly only 499 of these will be made and it comes with a price tag of £350,000. Ouch!

Hispano Suiza also made its official debut with the Carmen, the 750kW electric hypercar which heralded the return of the brand in 2019, was driven by Luis Perez-Sala, former Formula 1 driver. Off track, ans could also get up close and personal with it in the Michelin Supercar Paddock.

US start-up Rivian is known for offering one of just a few electric pickups on the market, and while it doesn’t have much appeal on UK soil, the R1T still drew a crowd, probably thanks to its star role in The Long Way Up, the latest (electric) motorcycle adventure from Ewan McGregor and Charley Boorman. Rivian offered them the world’s first prototype of their R1T as a support vehicle – a huge gamble – which fortunately paid off and out-performed all expectations; the brand even installed fast-charging points along the entire route for the expedition. With quad-motor all-wheel-drive, producing 834bhp and 908 lb-ft of torque, the truck can tow up to 4990kg, drive through three feet of water or up a 45-degree angle slope, and deliver up to 400 miles of range. 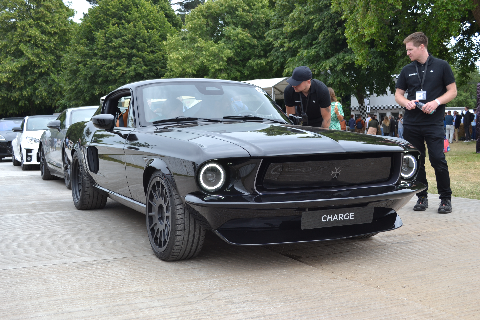 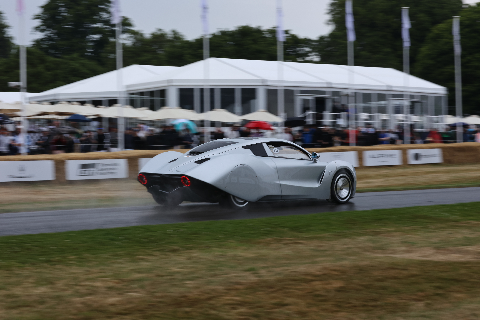 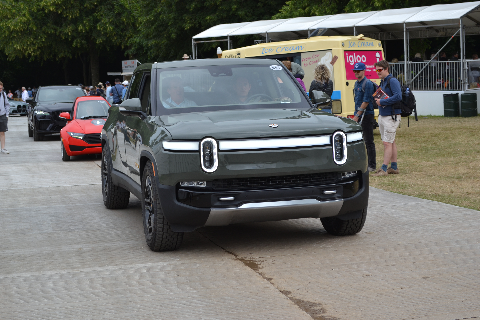 Despite only being available in North America and Canada, the Duke of Richmond made a (somewhat late) personal request to Lucid to attend this year’s Festival, and Lucid pulled out all the stops to make it. The company plans to offer the Lucid Air Dream Edition in Germany, the Netherlands, Norway and Switzerland later this year and despite being vague in its plans to expand into the UK (‘in the future’), the American-built Grand Touring Performance with 1035bhp and former Top Gear Stig Ben Collins at the wheel, certainly grabbed people’s attention. While the Tesla Model S is its obvious competition, Lucid has also benchmarked itself against the Mercedes S-Class (for its plush ride), Porsche Taycan (in terms of performance) and Lotus Eletre (for its handling). We were lucky enough to bag an interview with Senior Vice President of Product and Chief Engineer Eric Bach so watch out for that shortly! 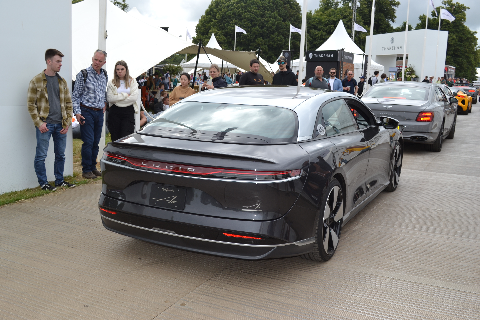 While Goodwood was the stage for Eletre making its global public debut Discover EV had already seen it during the official press unveiling at the BBC Television Centre earlier this year. Still, it was good to see peoples reaction to what is pretty much the polar opposite of what has come before from the brand. With a big presence in the Electric Avenue as well as the manufacturer’s stand, visitors were eager to get up close to the hyper-SUV and ask the team questions – its bold looks and performance figures (600hp) intriguing fans new and old. And with Formula 1 world champion Jenson Button taking the car up the iconic Goodwood Hill Climb and on the stand throughout the weekend, it’s no surprise they were busy from the moment the gates opened! 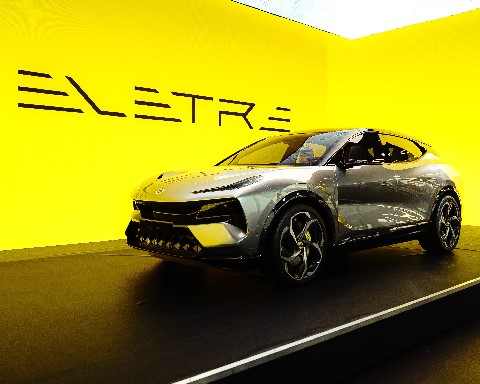 BMW i at the Stable Yard

While you couldn’t go without noticing the central feature sculpture on the lawn of Goodwood House – designed in celebration of BMW M's 50 year anniversary and showcasing some of the marque's most iconic models – the Stable Yard once again was dedicated to the latest range of all-electric and electrified models.

Highlights included the stunning i Vision Circular. Optimised for circular economy and with the goal of achieving 100 per cent recycled and recyclable material use, it’s a compact luxurious EV for the 2040s. As someone pointed out though – it still has a grille! The new i7 was also on display featuring a unique 31.3 inch 8K BMW Theatre Screen, as was the i4 Gran Coupé and iX3, and the recently revealed iX1, set to offer a range of up to  272 miles (WLTP, provisional figures, and based on the xdrive30), made its UK debut. 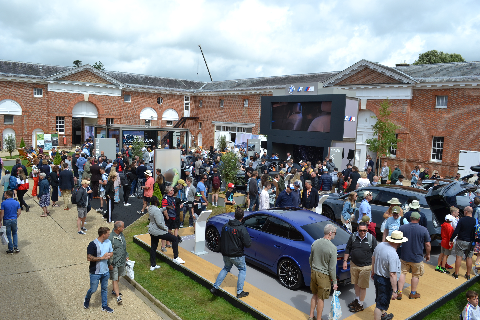 While a bit of a PR stunt the Mercedes-Benz VISION EQXX recently made headlines for breaking its own efficiency record (a range of more than 1000 kilometres, equating to consumption of less than 10 kwh of energy per 100 kilometres) on a 1202km road trip from Stuttgart, Germany, to Silverstone here in the UK, on a single battery charge. While efficiency features such as the slippery drag coefficient of 0.17, low-rolling-resistance tyres and solar panels on the roof may not have been put to the test during its short drive up the hill at Goodwood, it was good to see it play a part in celebration of 55 years of AMG – a high-performance subsidiary of Merc that one typically associates with V8 engines. As well as setting new standards for range and efficiency, VISION EQXX prototype is also designed to demonstrate how sustainable and luxurious electromobility can be. 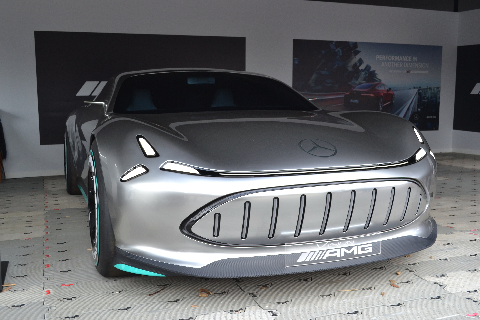 Polestar had a very impressive stand, and it’s no wonder choosing the event to debut its Polestar 5 electric four-door GT. The production evolution of the Precept concept car first shown in 2020 has a targeted 859bhp and 664lb-ft of torque; featuring 800V architecture, it’s a high-performance EV said to have proper sports car credentials.

Pete Allen, Head of Polestar UK R&D, says: “Polestar 5 is shaping up to be a superb 4-door GT and a true Polestar at heart. The platform combines low-volume performance car attributes with modern technological advances to bring light-weight, high-rigidity sports car chassis technology into mass production.” The car is planned for launch in 2024 and is the third of three new electric cars expected to be launched by Polestar in the coming three years, following the 3 and 4 SUVs. 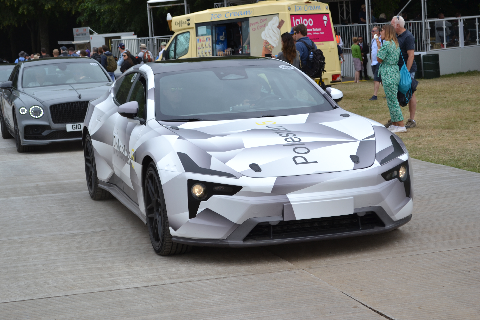 While the aforementioned GT4 eperformance secured a time of 45.50 seconds and second place in the overall rankings, it was the Gloucestershire-based car company Mcmurtry that conquered with its compact hypercar managing a run of 39.08 seconds. Driven by ex-F1 driver Max Chilton, it beat the Volkswagen ID.R’s previous fastest time set in 2019 by 0.8secs. Taking 1.5 seconds to reach 62 mph, the video almost looks sped up as Chilton pushes it to its limits. How is it possible? Well, the Mcmurtry Speirling has a unique fan-powered downforce system, which enables it to produce more than 2000kg of downforce at any speed as it does not rely on airflow over the car. You can watch the video here. 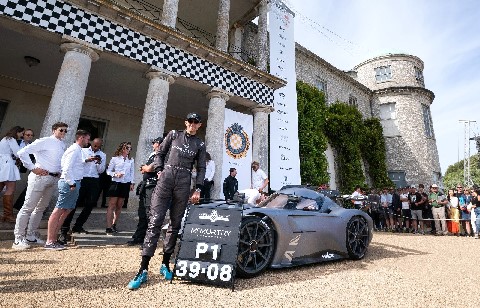