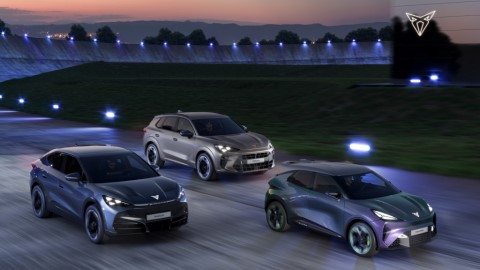 CUPRA has showcased a trio of new, electrified models which will be launched by 2025. Demonstrating the future direction of the Spanish brand, the Terramar, Tavascan and UrbanRebel are a mix of PHEV and fully electric cars which it hopes will drive CUPRA’s popularity across Europe.

Two of the newly revealed models we have known about for some time. The Tavascan is effectively three years old, having first been displayed as a concept car at the 2019 Frankfurt Motor Show, whilst the UrbanRebel was mooted more recently as a small, affordable and fast EV. The Terramar, on the other hand, is new to the mix and will be CUPRA’s first electrified SUV – if you discount the Formentor.

CUPRA’s first proper SUV, the Terramar is named after the Spanish coastal town. The brand admits it’s producing an SUV to capitalise on the boom in oversized cars with off-road pretentions and the Terramar won’t be exclusively electrified, with conventional powertrains on offer.

Alongside these will be PHEV options which will enable the Terramar to travel up to 62 miles on a charge – about as far as any other current PHEV can go on a charge and what looks to be the new standard. It’ll share much in common with the new Audi Q3 Sportback in terms of size (4.5 metres long) and under the skin, though exact details are yet to be revealed.

It was almost inevitable that CUPRA would jump on board with a fully electric, performance-orientated SUV given the popularity of the VW ID.5. The Tavascan is that car and it has been in gestation for some time with the concept first revealed in 2019 and an Extreme E version shown off in 2021.

Based on the MEB platform, our assumption is that the Tavascan will get the 295bhp GTX powertrain from the ID.5 which will combine with a 77kWh battery for just under 300 miles of range. Zero to 62mph in just over 6.2 seconds and CUPRA’s penchant for sharpening up VW’s chassis should ensure it’s engaging to drive. We’re expecting the Tavascan in 2024.

Based on the VW Group’s MEB Small platform, the UrbanRebel could be a small bag of fun when it comes out in 2025. A foot shorter than the CUPRA Born at 4.03m long, it is designed to sit below the brand’s inaugural EV in the range, but certainly doesn’t compromise on performance – on paper at least.

CUPRA is making the UrbanRebel a comparatively light EV and will equip it with a 222bhp motor enabling it to sprint to 62mph in 6.9 seconds as well as having a very decent 273 miles of range in what we presume will be a longer-range version. A shorter-range version for less money – possibly around £21k if CUPRA’s previous aspirations remain.

The company’s CEO, Wayne Griffiths, is understandably excited for CUPRA’s future: “We know exactly where we want to go, and I promise you it will not be boring. Every single model we will bring to the market will be a step ahead on our journey. We will stay true to ourselves and be authentic, this is the spirit of the CUPRA Tribe. We’ll do this the CUPRA way, like we always have. The future is electric. The future is CUPRA.”