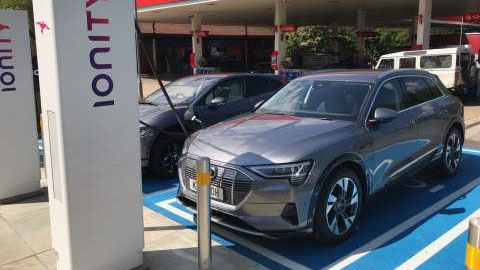 It's a constant criticism of EVs from many quarters: charging points aren't numerous enough to make them work in the 'real world'. Well, that argument has suffered a major blow as, for the first time the number of charging stations in the UK outstrips the number of sites to put refined fossil fuels in a conventional car.

According to new data from Zap-Map, the UK's leading charging point platform, as of the 22 May there are a total of 8471 charging locations across the UK – 71 more than there are petrol stations. Across these charging locations there are 13,613 charging devices, and while the number of outlets selling bad sandwiches, overpriced coffee and petrol continues to decline, in the past 12 months alone the public charging network has grown by 57 per cent.

This impressive growth in charging points is in-line with the ever-increasing adoption of EVs and PHEVs as a truly viable way of getting around the country. Indeed, just six years ago there were just 3500 electric cars on the road but now there are more than 210,000. This increase is predicted by almost all analysts to continue on a stratospheric trajectory, with the National Grid reckoning on a total stock of between 2.7 million and 10.6 million on the UK's roads by 2030.

Ben Lane, co-founder and CTO at Zap-Map commented: “The public and private sectors are now investing heavily in the UK’s EV charging infrastructure to ensure that there are sufficient charging points to support the growing electric fleet. This month’s milestone reveals the rapid pace of change already underway as the age of the combustion engine gives way to an all-electric era with vehicles offering both zero-emissions and a better driving experience.”

Government policy strongly supports not just the increasing electrification of the UK's fleet, it is also gearing up to support the electric revolution with a public charging network that is fit for purpose. And whilst many will point at charging points and say that EV emissions are merely being displaced to a greenhouse gas-belching power grid, more and more suppliers of power to charging points get their energy solely from renewable sources.

For example, we recently reported on the launch of a new, high-capacity (350kW), Europe-wide fast charging network that – in the UK at least – gets all of its power from green energy production. So whilst the network is still imperfect with regards to power sources, it's increasingly able to come back to doubters and tell them to write down their concerns, stick them in their green bin and recycle them...