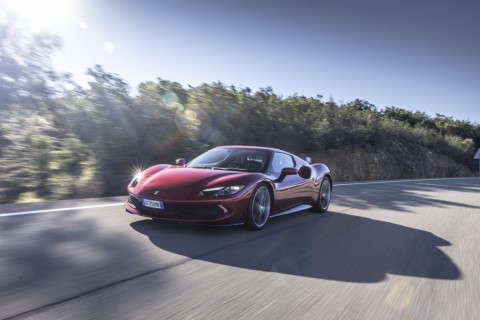 Makers of some of the most evocative petrol-powered cars in the world is pushing forward with an electrification strategy that will see 60 per cent of its model range running electrified powertrains by 2026. By 2030, this will rise to 80 per cent of which half will be pure EVs.

So far, Ferrari has only dipped its toe into the world of plug-in cars with the SF90 Stradale and 296 GTB (and their variations) running plug-in hybrid power, less to provide short range, zero emissions motoring and more to enhance performance.

However, in just four years, the Italian supercar manufacturer is aiming for 60 per cent of its models to be either fully electric or (more widely) packing hybrid drive. The brand’s plan, set out earlier this year, is to launch 15 new models between 2023 and 2026. Whilst this number includes limited run and one-off models, these will make up just five per cent of sales so in terms of volume, electrified models will be far more numerous.

Ferrari is developing its first battery electric car for launch in 2025 and this will pave the way for further BEVs to be added to its range thereafter. The brand’s longer term vision to 2030 will see 80 per cent of sales being of electrified cars of which half will be fully electric and the remainder either PHEV or hybrid.

Obviously, Ferrari has a huge amount of development to undertake in order to make an EV feel like a ‘proper’ Ferrari. It has high ambitions too, with the intention of trumping other performance EVs in terms of power density, weight and driving feel.

It’s already developing electric motors at its home in Maranello and intends to build them there, in future. We don’t know who Ferrari will be purchasing battery cells from just yet, but they will be third-party provided and integrated into the cars’ chassis for strength, reducing weight and distributing it more evenly.

Some of the technology that Ferrari will be utilising comes from its Formula One programme, especially with regards hybrid drive. Elements of this are already built into its PHEV models, but we can expect more to come with the new generation of hybrids.

Despite this new focus on electrification, Ferrari will continue to develop petrol engines as it considers this ‘an essential part of Ferrari heritage’. Whether the brand joins in with companies like Porsche to develop and expand the production and use of carbon neutral synthetic petrol remains to be seen, but Ferrari is planning on carbon neutrality across its operations by 2030.