Genesis, the luxury arm of Hyundai, has released the first images of its forthcoming GV60. It’ll be the second EV from the carmaker, which launched in Europe this summer but unlike the first – the G80 EV – the GV60 is based on the electric-only E-GMP platform.

Taking the form of a mid-sized crossover, the Genesis GV60 shares a common architecture with the much-lauded Hyundai Ioniq 5 and hotly anticipated Kia EV6.

Nomenclature wise, the ‘60’ element of the name denotes that the car sits slightly lower down in the model range, below the G80 EV which is a large executive saloon. The ‘V’ stands for versatility, which is common across the brand’s SUV-type vehicles.

Whilst Genesis hasn’t provided technical details on the GV60 yet, the fact that it uses the E-GMP platform tells us a few things from the off. It’ll get the same 400/800 volt electrical architecture which enables charging speeds as high as 350kW, as well as V2L (vehicle to load) capability. Genesis will be able to offer the car with both single (rear) and dual motor setups with over 300bhp possible, as can be found in both the Hyundai Ioniq 5 and Kia EV6. It’s likely that the battery options will be 58kWh and 77.8kWh.

We’ll confirm the technical details as soon as we have them!

For the time being, Genesis is keen to highlight the GV60s styling which is inspired by the brand’s ‘Athletic Elegance’ design language. It’s calling the car both iconic and progressive, with quad headlamps a major feature of the front end, which sit above the brand signature ‘crest grille’. Even the badge on the nose of the car has been changed to highlight the athleticism the brand wants to convey with the car, reducing its thickness by around 80 per cent.

A clamshell bonnet, which incorporates the car’s front wings in one piece, removes shut lines for better aero. From the side, Genesis has given the car a coupe-like profile with a high waistline and low floor level to aid the stance. Auto-flush door handles and digital side mirrors aid those slick-looking visuals. At the rear, there’s a fixed high-level spoiler and two line rear combination lamps, echoing the quad headlamps at the front of the car.

Inside, the GV60 gets Genesis’ design ethos: ‘Beauty of White Space’. This is supposed to create a spacious, comfortable interior which reflects the brand’s premium position. Central to the interior design is the so-called ‘crystal sphere’ – a spherical transmission control which has dynamic driving functions and also features mood lights that illuminate when the GV60 is off. Other spherical details are incorporated into the interior, such as the door handles, door mirror controls and horn cover.

As you’d expect from a car that shares the same platform as the cavernous Ioniq 5 and Kia EV6, there’s plenty of space which is aided by the flat floor containing the battery pack and electronics. A slim cockpit is also enabled thanks to the lack of an engine behind the bulkhead.

Dominique Boesch, Managing Director for Genesis Motor Europe, commented: “When we launched in Europe, we committed to bringing three electric cars to the region within our first year; we are proud to confirm the GV60 will be our second electric car for Europe, following soon after the launch of the electrified G80.” 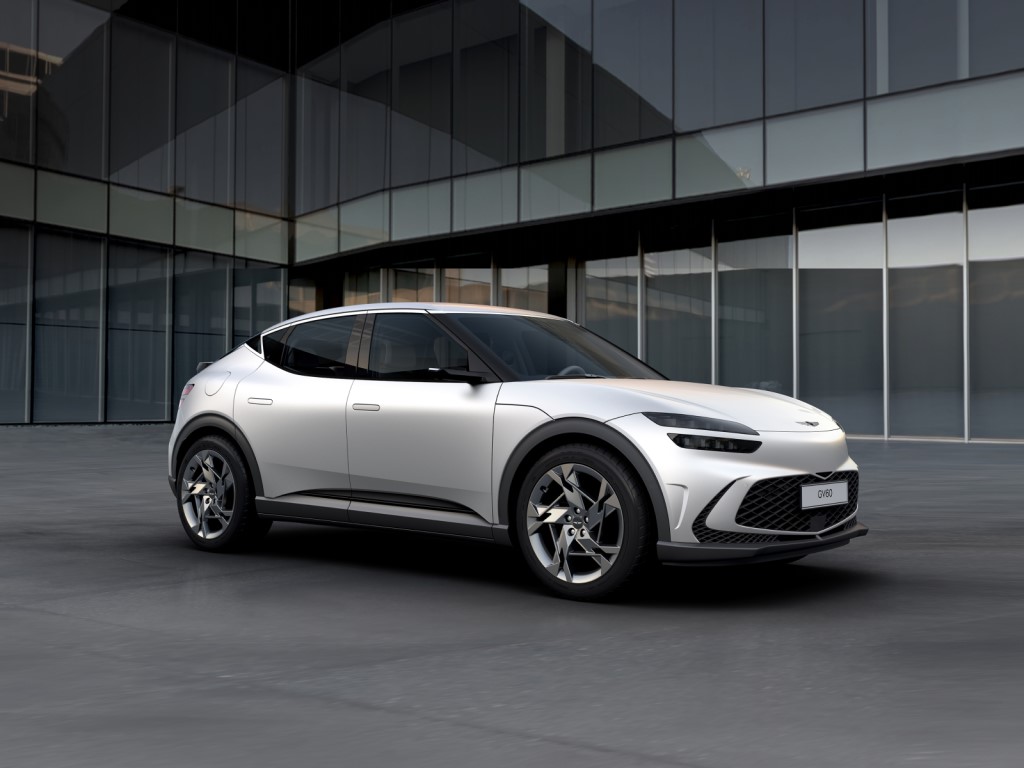