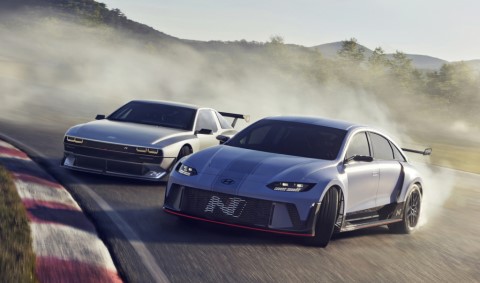 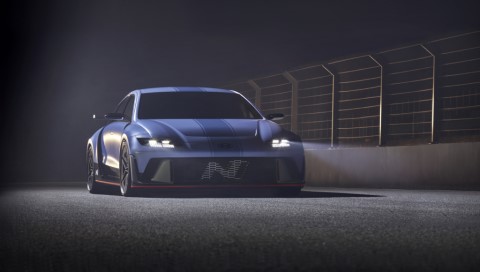 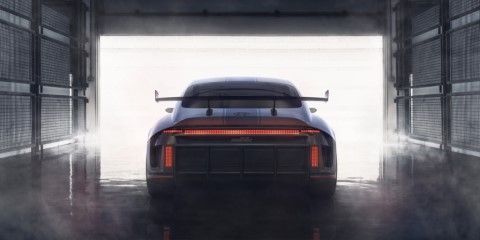 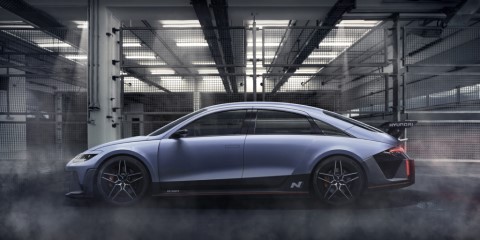 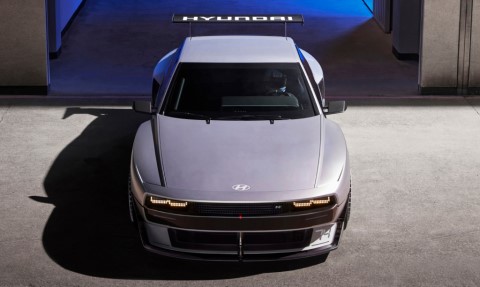 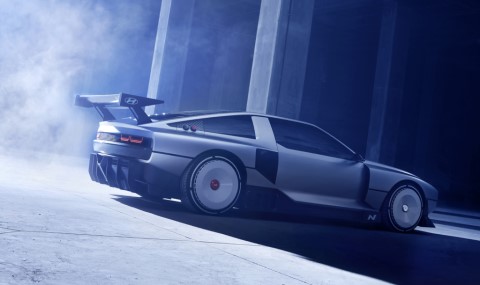 You may also recognise the two cars as the RN22e uses the brand new IONIQ 6’s distinctive styling whilst the equally eye-catching N Vision74 blends Hyundai’s N 2025 Vision Gran Turismo and original 1974 Pony concept for something which is part futuristic and part restomod.

Both, in our view, are equally thrilling to look at and rather than just being static concepts, both are also functioning vehicles, developed in Hyundai’s rolling labs to explore ‘driving fun’ in the electrification era.

The RN22e is far more likely to reach production in some form and hints at how an N version of the new IONIQ 6 will look and perform. It uses the now familiar E-GMP platform which underpins the IONIQ 5 and 6 and derives its name from the fact it has been innovated by the rolling lab ® with the N division (N) in 2022 (22) – and is an EV (e).

Hyundai has built it with three performance pillars, with handling being one of them. It uses torque vectoring across all four wheels which is controlled through a twin clutch. 3D printed suspension parts reduce both sprung and unsprung weight to further enhance handling characteristics. Cooling and braking has also been optimised for track use, with 400mm, four-pot brakes combining with regen-braking to slow the car. Yaw control has been built into the regenerative braking to help with turn-in.

Using the IONIQ 6’s body style means that the RN22e is aerodynamically clean straight from the off, albeit the N team have added aero features such as wider shoulders, a lower ride height, redesigned bumpers and wings to improve performance.

Speaking of performance, it packs 577bhp and 546lb-ft of torque alongside a 77.4kWh battery. Hyundai doesn’t give a 0-62mph time, but somewhere in the low 3s is about right. What’s more, the powertrain is built up from existing tech and could well feature on in IONIQ 5 N which is due out next year. Watch this space for more.

Firstly, and unfortunately, the N Vision 74 concept is unlikely to make it near production, but we’re pleased Hyundai has bothered to develop it because… well, look at it. Paying homage to the 1974 Pony concept means that it is a retro car but with state-of-the-art power as well as design details like Hyundai’s Parametric Pixel lighting and a cockpit which blends analogue buttons and digital read-outs.

It's bigger than the Pony, at 4952mm long, 1995mm wide and 1331mm tall, and incorporates the most advanced FCEV system Hyundai has ever produced – something inspired by the N 2025 Vision Gran Turismo which was unveiled in 2015 and showed off how FCEV systems could power future performance cars.

The N Vision 74 is effectively a FCEV hybrid which combines a battery electric system with the fuel cell, switching between the two to improve efficiency depending on conditions, or combining them for more power. Twin motors at the rear drive the rear wheels which also have torque vectoring.

Power stands at 671bhp and 664lb-ft. The battery electric side is catered for with a 62.4kWh battery capable of 800 volt fast charging, whilst the FCEV side uses a 114bhp (net, 127bhp max) stack with a fuel capacity of 4.2kg. This not only makes the N Vision 74 potentially very rapid, it also enables a driving range of around 375 miles between charges/refills.

As we say, the N Vision 74 or its tech is unlikely to be produced – at least any time soon. But the fact Hyundai is already working on it shows that the future of performance cars in an electrified world is far from dull!