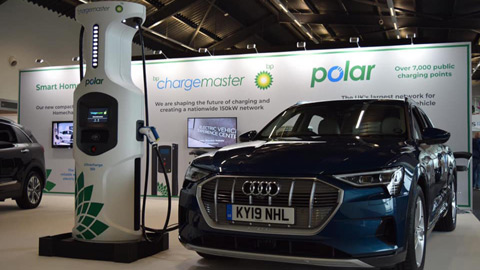 Latest charge point news from around the UK

There's been a glut of news recently around improvements to the EV public charging network, with roll-outs of fast chargers, acquisitions which will help leverage experience, and an EV infrastructure delivery plan for London. Let's take a closer look at what's been going on...

At the recent Fully Charged LIVE Show, BP Chargemaster announced a significant upgrade to its forecourt-based Polar public charging network with the imminent addition of ultra-rapid chargers able to juice at up to 150kW. By the end of the year, BP will have installed 100 'Ultracharge 150' chargers at 50 locations around the country with 400 of the units set to be deployed by 2021.

Whilst BP Chargemaster will continue its roll-out of 50kW chargers (which have triple connector and Type 2 43kW options) to cater for most of the market, the Ultracharge 150 units will futureproof the Polar network for the latest generation of EVs. They will feature both CCS and CHAdeMO charging options and be available to both pay-as-you-go customers, and Polar Plus subscribers.

Booths and InstaVolt team up for shop-and-go rapid charging

If you are an EV owner in the north of England, doing the supermarket shop just got a bit more convenient. Booths has teamed up with InstaVolt to install 100 50kW DC chargers at locations across North West England and Yorkshire.

At present, over 40 charge points have already been installed, with more coming online soon. One of the benefits of the InstaVolt partnership is the fact that it requires no subscription, there's no connection or minimum energy fee and there's a fixed price of £0.35p per kWh. Customers can find details of their nearest Booths store and its facilities here: https://www.booths.co.uk/stores/.

In a continuation of its ultra-rapid 'High Power Charging' (HPC) network roll-out, IONITY has teamed up with motorway service station group, Extra MSA, to provide eight new HPC locations across the UK. At each Extra motorway service area location the plan is to have up to six 350kW-capable charge points that can juice the new generation of compatible EVs to full or near full in just 20 minutes.

The first Extra MSA service area to get the HPC facility is the brand new location at junction 45 on the M1, near Leeds, which will go online later this year. In the near future the following locations will also go online: M25 Cobham, J28 M11 at Cambridge, J2 M40 Beaconsfield, J28 M5 Cullompton, J4 M65 Blackburn, J10 A1M Baldock and J17 A1M Peterborough. The roll-out is part of IONITY's pan-European expansion, which will see up to 2,400 chargers installed by the end of 2020.

The Mayor of London's EV Infrastructure Delivery Plan has been released and sets down the roadmap for how London will adapt to – and help promote – a move towards EV mobility.

Increasing the number of charge points is central to the plan, which suggests that by 2020 the capital will need 200-400 rapid charge points, specifically based around an ultra-rapid network of 100kW-150kW chargers located at petrol stations. In the same timeframe, it suggests between 3400 and 4700 standard (c. 50kW) charge points. The requirement will grow rapidly, however, with almost 50,000 standard charge points and 4100 rapid chargers required before 2025 if EV adoption rates grow as forecast.

Other initiatives within the plan include charging 'hubs' which allow multiple cars to be charged rapidly at the same time, increasing the number of EV car clubs to increase choice for Londoners and a new 'one-stop-shop' for residents to request better infrastructure from their local authority where demand is high.

In another London-based initiative, Barnet Council has installed 40 lamp post-based charge points with a further 40 to go live in the autumn of this year. It's a pretty obvious solution to the issue of EV charge point location, given that almost every street already has ample supply of lamp posts.

Installing the charge points requires a limited amount of work to the wiring of the lighting column and will only charge at a rate of 3.5kWh. Whilst this isn't much use for a rapid top-up at a rate of 12 additional miles of charge per hour, it comes into its own for offsetting the battery charge loss of driving into the centre of Barnet and then home again. Furthermore, charging is cheap at just 25p per hour; however you'll still need to buy a parking ticket to use them...

In the move, Engie will take control of more than 300 fast and rapid charge points which are run by GeniePoint – the public EV charging service of which CPS is the parent company.

GeniePoint has grown rapidly, according to EV charging network specialists, Zap-Map, with over 800 individual connectors across 250 locations serving over 20,000 customers across the UK. It plans to increase its provision more than 400 rapid and 500 fast chargers by the end of the year. Engie's acquisition should ensure this happens as the company has plenty of experience in the EV charging sector through its charge point firm, EVBox.

EVBox already has 75,000 charge points worldwide and has been appointed by West Yorkshire Combined Authority to install 88 rapid chargers in the region. Nicola Lovett, CEO of Engie UK & Ireland, said: “Acquiring CPS is an important step in scaling up our ambitions in the EV market, complementing our existing energy supply activities and our partnerships with local authorities and businesses.”