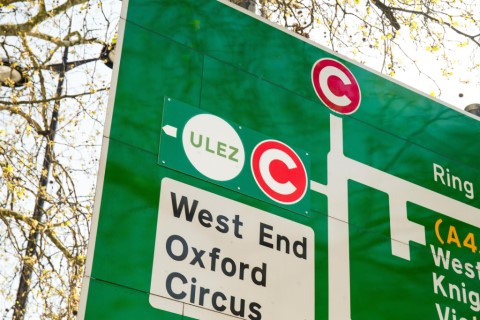 London Mayor, Sadiq Khan, has launched a consultation through Transport for London on expanding the Ultra Low Emission Zone to the entirety of Greater London by the end of 2023. His aim is to reduce both pollution and traffic within the capital, stinging those with more polluting vehicles in the wallet.

London’s ULEZ was already expanded to 18 times its original size in October last year and now includes all of London between the north and south circulars. Sadiq Khan’s plan – if successful – will simply blanket the whole of Greater London in a new zone, affecting around 3.5 million people in the process.

According to the Mayor’s office, this new zone would affect around 135,000 cars on a daily basis – each falling foul of the strict ULEZ requirements and therefore being subject to a £12.50 charge to enter the capital. As it stands, the rules would be the same as are currently in place within the ULEZ, meaning that Euro 4 petrol and Euro 6 diesel cars, vans and minibuses will be compliant thanks to their lower official NOx emissions.

This is fairly generous in the scheme of things, with Euro 4 having been introduced in 2005 and Euro 6 in 2015. As such, diesel owners are far more likely to be affected – though again, give the relative harm that their exhaust causes, by most yardsticks this is a positive step.

Indeed, Khan points out that introducing a far larger ULEZ is a matter of social justice, with the poorest in society affected far more than the more affluent. By way of example, around half of Londoners don’t own a car – many due to poverty – and they are disproportionately affected by emissions they aren’t responsible for.

Says Khan: “If no additional action is taken to reduce air pollution beyond the existing polices, around 550,000 Londoners would develop diseases attributable to air pollution over the next 30 years and the cumulative cost to the NHS and the social care system is estimated to be £10.4 billion.”

Obviously, revenue will also be created by introducing a new charge which TfL is in desperate need of as it has a funding black hole.

As it stands, there’s no plan to introduce a new clean air zone which would penalise all but the cleanest vehicles, or charging cars that are registered outside of London. Conversely, a scrappage scheme is being proposed to ease the burden on those who live within the zone but will need a new car to be compliant. There’s no word on exactly what this will look like, but the Mayor’s Office will need government backing to make it work.

As with any expansion of road charging, it has to be balanced – weighing up the costs and benefits. When it comes to cleaner air and less congestion, however, it does seem like a good move to blanket Greater London in a new ULEZ. Some might argue that poorer people with older cars will be hit, and of course some will, but there is a need to think of the greater good. Given that so many people don’t own a car in the capital, it’s more unfair that they’re the ones paying for other people’s pollution by breathing unclean air.

What the plans also demonstrate is that cities are going to become more stringent when it comes to clean air, so drivers who regularly contribute to urban pollution and traffic would do well to consider going electric sooner rather than later.