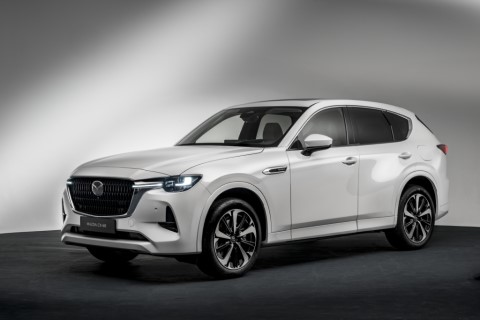 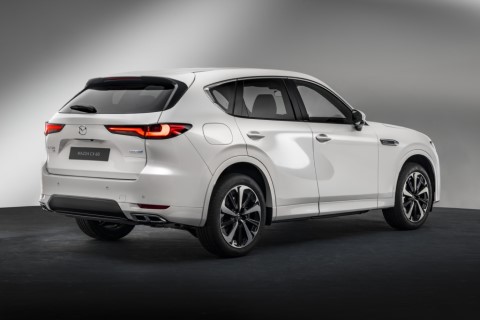 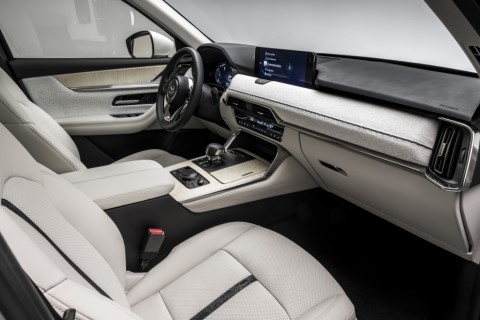 Mazda has launched the CX-60 – a plug-in hybrid SUV which represents both the first PHEV produced by the brand, and its most powerful production car to date. Combining the brand’s efficient Skyactiv petrol engine technology with decent electric range, Mazda is hoping to find its place in the busy PHEV SUV segment.

The Mazda CX-60 will join the range above the current CX-5 SUV and is the brand’s flagship car. It will go up against stiff competition from the likes of the DS 7 Crossback E-Tense, Audi Q5 TFSIe and CUPRA Formentor eHybrid – among many others. As is always the case when it comes to Mazda, it’ll hope to appeal to its current fanbase as well as grabbing a few new punters away from some of the more mainstream competition.

The Mazda CX-60 e-Skyactiv PHEV (to give its full name) combines a 2.5-litre Skyactiv-G four cylinder petrol engine with a 134bhp electric motor to bring the total system output to 323bhp and 369lb-ft. As such, it’s Mazda’s most powerful production car to date and performance reflects this, hitting 62mph in just 5.8 seconds. This is helped thanks to an all-new eight speed automatic gearbox and i-Activ all-wheel drive.

On the electric side, the Mazda might just sway a few people thanks to its 17.8kWh battery which enables a zero emissions range of 42 miles in urban driving, or 39 miles in combined driving at up to 62mph. Official efficiency figures are 188mpg and 33g/km of CO2. Mazda hasn’t said what charging speeds the CX-60 will take, but at a fairly standard 7.4kW we’re talking just over two hours for an 80 per cent charge.

Mazda has always played heavily on driving dynamics and it’s the same story with the CX-60. It features Mazda’s Kinetic Posture Control which brakes an inside rear wheel under cornering loads to mitigate body roll. The system has been employed on the MX5, too. A low-slung battery also helps keeps dynamics in check.

Mazda reckons the CX-60 “represents everything that Mazda has built into its DNA over the last 100 years”, both inside and out, thanks to “the finest Japanese craftsmanship plus the latest innovations in human-centric technologies and world-leading powertrains”. Three grades of car will be offered in the UK – Exclusive-Line, Homura and Takumi – with customers given the ability to add tow option packages to any grade. These packages are a Convenience pack and Driver Assistance pack. Exclusive-Line cars can also be equipped with a Comfort pack while Homura and Takumi cars can be spec'd with a panoramic sunroof.

On the outside, the CX-60 is the latest car to benefit from the brand’s Kodo design language. It has a long bonnet, hinting at the fact that non-PHEV variants of the car will be getting six-cylinder engines and rear drive. A high waistline, large wheels of up to 20 inches and strong lines add to the muscular look.

Inside, Mazda says the car achieves the highest standards of craftsmanship combined with new technologies. The cockpit is asymmetrical and focused on the driver. Homura grade cars and up get Mazda’s Driver Personalisation System, which recognises the person driving by facial recognition (where that person’s details have been added) and automatically adjusts the seating position and vehicle settings for them.

The Convenience pack costs £1000 and adds privacy glass, a 360 view monitor and wireless phone charging. For £1100 the Driver Assistance pack adds a host of active driver and safety aids. Standard tech includes adaptive cruise with speed limit recognition and hill descent assist, among others that come as part of i-Activsense driver assistance.

On a practical level, the CX-60 has 570 litres of boot space with the seats in place, and including the underfloor space.