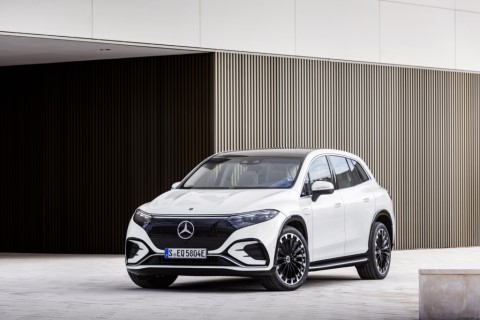 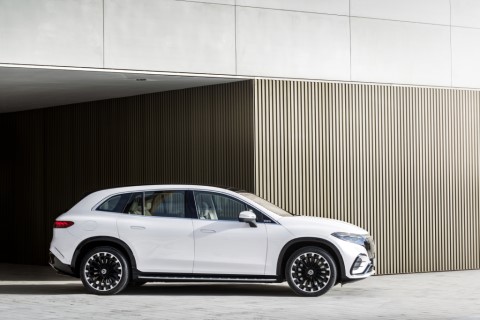 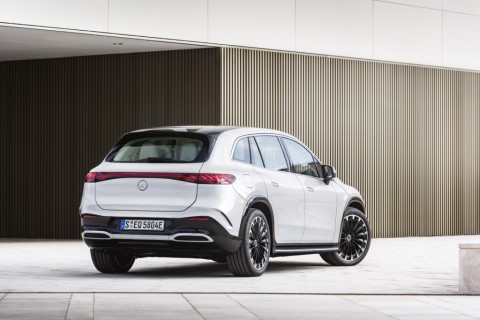 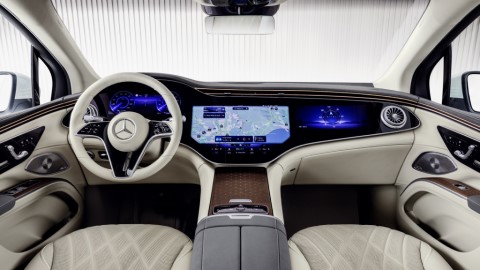 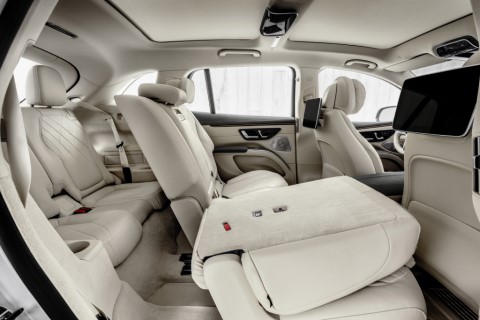 Mercedes-Benz has revealed details of the forthcoming SUV variant of its flagship electric saloon, the EQS. Due in the UK before the end of the year, the Mercedes-Benz EQS SUV will come in three variants and straddles the gap between Merc and its luxury brand, Maybach.

The Mercedes-Benz EQS has been the halo in the brand’s electric car range until now. The launch of the lifted version of the EQS, which shares the same platform as the saloon, makes it the flagship of the battery-powered vehicles coming out of Stuttgart. In lieu of fully electric versions of the brand’s traditional SUVs bearing the ‘G’ nomenclature, the EQS SUV will go head-to-head with equivalent luxury SUVs from Audi, BMW, Genesis and the like.

Underpinning the EQS SUV is the same EVA platform as the saloon, and the powertrain options are also common between the two models. This means that three versions will eventually be made available including a rear-wheel drive variant – the EQS 450+ – and two all-wheel drive variants – the 450 and 580 4MATIC.

All cars share the same 107.8kWh battery running 400volt electronic architecture and with a maximum charging speed of 200kW. This means a 10 to 80 per cent charge can be achieved in 31 minutes. A 11kW on-board AC charger comes as standard with 22kW an option, offering charging anywhere between 11 and five hours.

Like the EQS saloon, rear-steer is available across the line-up with an optional increase in steering angle via an over-the-air update reducing the car’s turning circle to a nimble 11 metres. AirMatic air springs come as standard, too, meaning the ride height can be lifted by up to 25mm at up to 50mph and is automatically reduced by 15mm when doing over 68mph in sport mode. An off-road mode enables the EQS SUV to tackle the odd grassy field or – more likely – an urban kerbstone.

Surprisingly, the SUV version of the EQS is ever so slightly shorter at 5125mm long (vs 5216mm) than the saloon. It is wider, however, at 1959mm (vs 1926mm) and obviously taller at 1718mm (vs 1512mm). The 3210mm wheelbase is the same, meaning that passengers have plenty of space. There’s even an optional third row, if you don’t require “room for up to four golf bags” – if old-school posh bloke measurements are your thing. In real terms, the boot has 645 litres with the seats up or 2100 litres with the seats down in the five-seater, or 565 litres seats up and 2020 litres seats down in the seven-seater.

Otherwise, the EQS SUV follows Merc’s formula for its EVs with the signature blanked off grille with an optional star pattern, new style of LED headlights which can be specified with the Digital Light function and a horizontal light bar connecting the front corners. Framed doors differentiate it from the saloon. Owners can specify aero-optimised running boards if they wish, whilst Mercedes claims the car has “a hitherto unique combination of spaciousness and aerodynamic efficiency”.

The Mercedes EQS SUV shares the same array of tech as the EQS saloon. Chief among the features is the latest MBUX operating system manifested with the optional full-width Hyperscreen interface. This allows the front seat passenger to ignore the rest of the occupants by watching a film or other dynamic content whilst on the move. A camera monitors the driver so that if they peek at what’s on, it dims the screen to deter them from distraction. Rear seat passengers can also benefit from in-car entertainment with screens mounted on the headrests of the front seats.

A Dolby Atmos sound system adds another layer of aural luxury to proceedings, whilst high levels of filtration through Energizing Air Control Plus ensures that the air in the cabin is of a high quality – even in polluted, congested cities. Voice control and an augmented head-up display complete the package.

There’s no word from Mercedes on the price of the EQS SUV just yet, but it’ll be north of £100,000 based on prices for the saloon. It’s due before the end of the year.