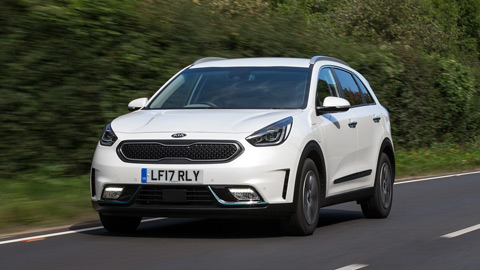 More people considering hybrids for their next car

Hybrids are now the second most popular choice after petrol for car buyers in the UK, leaving diesel languishing as the third place power source according to Motors.co.uk. The website's Consumer Insight Panel survey also showed that both hybrids and pure electric powertrains have grown in popularity between August 2018 and May 2019.

Petrol remains by far the most popular choice for the 1006 individuals surveyed with 52 per cent stating that it would be their fuel of choice – but even this is down five points compared to August 2018. Hybrid powertrains were the second most desirable, with 22 per cent of respondents stating it's what they'd like to purchase, whilst diesel dropped three points from last year, taking just 16 per cent of the vote.

Whilst hybrids might have cemented their place as the second most favoured type for car buyers, it was pure EVs that saw the biggest increase in favour, doubling over the nine months between August 2018 and May 2019 from five to ten per cent.

“The percentage of consumers expecting to buy an alternative fuel vehicle (AFV) as their next purchase has grown since last summer, with hybrid increasing the gap between it and diesel as the number two choice. This increase in intent to choose hybrid reflects its position as a practical transitional technology, with some drivers seeing it as a viable alternative to diesel.

“However, in terms of the overall impact of this desire for AFVs on used sales in the short to medium term, I think we will see consumer demand being greater than supply, resulting in continued strong sales for the traditional fuel types,” said Dermot Kelleher, Motors.co.uk Head of Marketing and Business Intelligence.

This issue of supply and demand echoes what Auto Trader found through its Retail Price Index as we reported last month. And the additional issue of consumers who want to buy AFVs being priced out of the market continues, with Auto Trader's latest figures from its Retail Price Index showing that as a whole, AFV average used price grew 4.9 per cent year-on-year for June. The average retail price was £21,759. For EVs, the upward trend is even starker at 11.2 per cent year-on-year. Between May and June alone the average EV retail price went up by £1214 to £24,985.

This is an issue for those car buyers in Motors' Consumer Insight Panel wanting to get into the AFV or pure electric market. When asked about whether certain factors affected their decisions regarding electric cars, 67.2 per cent said they'd switch to an EV if it was cheaper – the biggest single factor identified.

There is light at the end of the tunnel, however, with cars like the new MG ZS EV coming to the market at a retail price from £24,995 – new – once the plug-in grant is applied. With other manufacturers clamouring to bring down costs, like most blocking factors to EV ownership, retail price is something that will soon be far less of an issue.